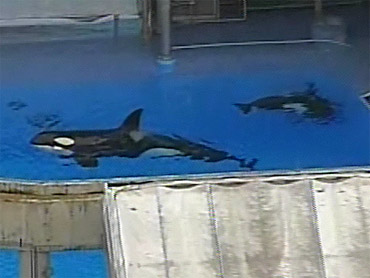 A woman who watched in disbelief and horror as a 12,000 pound killer whale killed a veteran trainer at SeaWorld in Orlando., Fla. says the whale shook its victim violently in its mouth during the attack.

She also says other whales were agitated before the incident.

Tilikum attacked and killed Dawn Branchea, who was 40.

Victoria Biniak, of Chicago, was at the park with her 5-year-old daughter and three other young children, and saw the whole thing unfold from close-up.

"We attended the 12:30 'Believe' show at Shamu Stadium," Biniak told "Early Show" co-anchor Maggie Rodriguez Thursday, "and Tilikum was not in that performance. He usually ends the show with all the splashing, no trainers in the water. And he was not performing that particular show. Three other whales, they had brought out tree other whales to do his performance, and those three did not want to perform, which cut the show (short)."

Though no one explained why Tilikum wasn't in that show, "They did explain that the whales were not cooperating and that's just something that happens, and they're not going to make them do something they don't want to do," Biniak said. "So, they were splashing each other and racing around the tank.

"After the show, we went down to the underwater viewing area and (Tilikum) was right up on the glass."

Suddenly says Biniak, Tilikum "just took off really fast. Came back around. Bobbed up in the water, and then had somebody in his mouth, and then shook.

"My daughter saw him just kind of lashing out. He shook her violently."

Biniak added, "It's extremely sad. We love SeaWorld. It's our favorite place to go. And it's just so terribly sad what happened to Dawn. So we're just praying for her family and everybody affected by this."