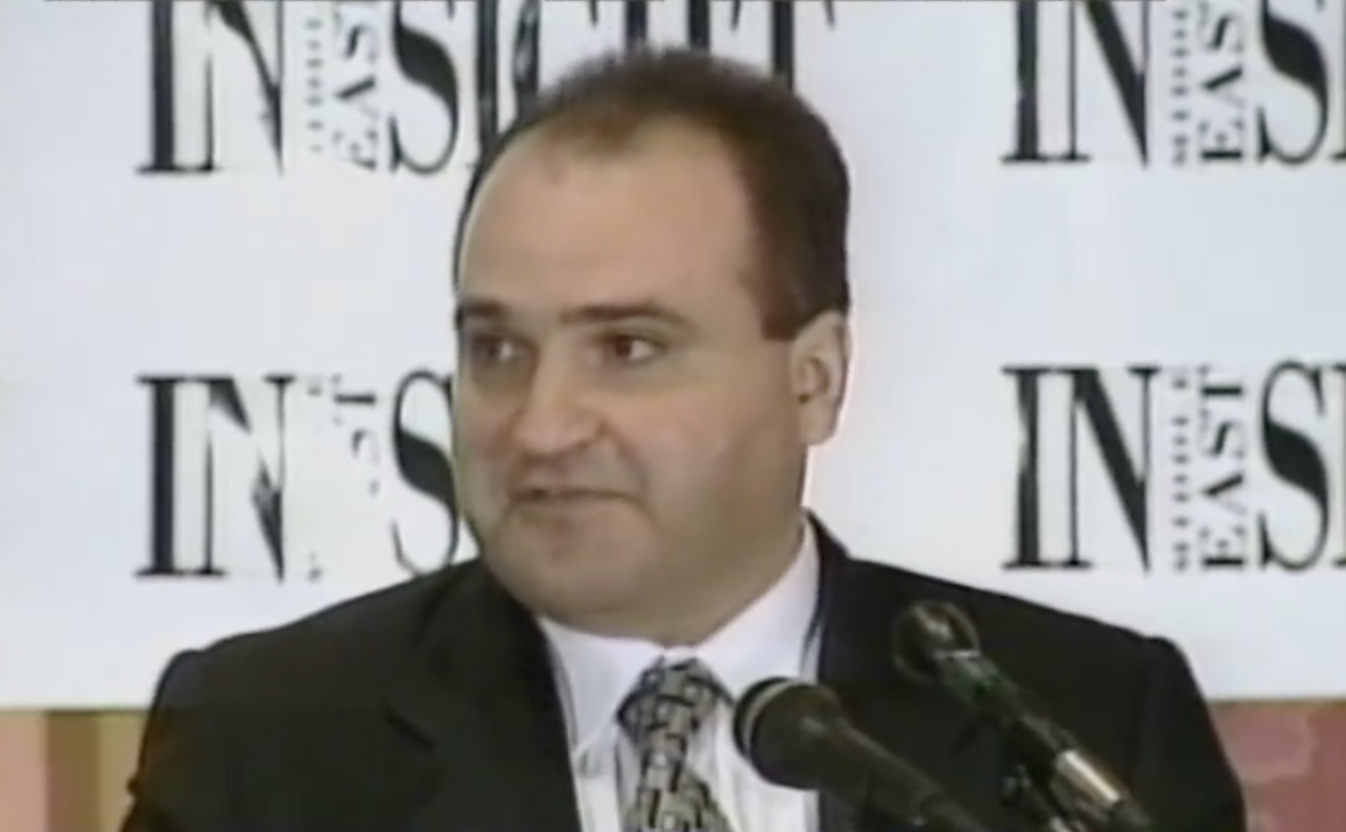 A top fundraiser for President Donald Trump received millions of dollars from a political adviser to the United Arab Emirates last April, just weeks before he began handing out a series of large political donations to U.S. lawmakers considering legislation targeting Qatar, the UAE's chief rival in the Persian Gulf, an Associated Press investigation has found.

George Nader, an adviser to the UAE who is now a witness in the U.S. special counsel investigation into foreign meddling in American politics, wired $2.5 million to the Trump fundraiser, Elliott Broidy, through a company in Canada, according to two people who spoke on the condition of anonymity because of the sensitivity of the matter. They said Nader paid the money to Broidy to bankroll an effort to persuade the U.S. to take a hard line against Qatar, a long-time American ally but now a bitter adversary of the UAE.

A month after he received the money, Broidy sponsored a conference on Qatar's alleged ties to Islamic extremism. During the event, Republican Congressman Ed Royce of California, the chairman of the House Foreign Affairs Committee, announced he was introducing legislation that would brand Qatar as a terrorist-supporting state.

Broidy said in a statement to AP that he has been outspoken for years about militant groups, including Hamas.

"I've both raised money for, and contributed my own money to, efforts by think tanks to bring the facts into the open, since Qatar is spreading millions of dollars around Washington to whitewash its image as a terror-sponsoring state," he said. "I've also spoken to like-minded members of Congress, like Royce, about how to make sure Qatar's lobbying money does not blind lawmakers to the facts about its record in supporting terrorist groups."

While Washington is awash with political donations from all manner of interest groups and individuals, there are strict restrictions on foreign donations for political activity. Agents of foreign governments are also required to register before lobbying so that there is a public record of foreign influence.

Cory Fritz, a spokesman for Royce, said that his boss had long criticized the "destabilizing role of extremist elements in Qatar." He pointed to comments to that effect going back to 2014. "Any attempts to influence these longstanding views would have been unsuccessful," he said.

In October, Broidy also raised the issue of Qatar at the White House in meetings with Mr. Trump and senior aides.

The details of Broidy's advocacy on U.S. legislation have not been previously reported. The AP found no evidence that Broidy used Nader's funds for the campaign donations or broke any laws. At the time of the advocacy work, his company, Circinus, did not have business with the UAE, but was awarded a more than $200 million contract in January.

The sanctions bill was approved by Royce's committee in late 2017. It remains alive in the House of Representatives, awaiting a review by the House Financial Services Committee.

The backstory of the legislative push is emerging amid continuing concerns about efforts by foreign governments or their proxies to influence American politics. While reports about possible Russian links to Mr. Trump's campaign and his presidential administration have been making headlines since 2016, questions are now arising about efforts during the Trump era to influence U.S. policy in the Middle East.

The U.S. has long been friendly with Saudi Arabia and the UAE as well as Qatar, which is home to a massive American air base that the U.S. has used in its fight against the Islamic State. But as political rifts in the Gulf have widened, the Saudis and Emiratis have sought to undercut American ties with Qatar.

Qatar and UAE have also exchanged allegations of politically motivated hacks. Scores of Broidy's emails and documents have leaked to news organizations, drawing attention to his relationship with Nader. Broidy has alleged that the hack was done by Qatari agents and has reported the breach to the FBI.

"It's no surprise that Qatar would see me as an obstacle and come after me in the way it has," he said in a statement.

A spokesman for the Qatari embassy, Jassim Mansour Jabr Al Thani, denied the charges, calling them "diversionary tactics." Representatives of the UAE did not respond to requests for comment.

The timeline of the influx of cash wired by Nader, an adviser to Abu Dhabi Crown Prince Sheikh Mohamed bin Zayed al-Nahyan, the de facto leader of the UAE, may provide grist for U.S. special counsel Robert Mueller's legal team as it probes the activities of Mr. Trump and his associates during the 2016 campaign and beyond. However, it is not clear that Mueller has expanded his investigation in that direction.

Mueller's investigators are looking into two meetings close to Mr. Trump's inauguration attended by Nader and bin Zayed. The pair joined a meeting at New York's Trump Tower in December 2016 that included presidential son-in-law Jared Kushner and Steve Bannon, who was Mr. Trump's chief strategist at the time. A month later, Nader and bin Zayed were a world away on the Seychelles island chain in the Indian Ocean, meeting with Erik Prince, the founder of the security company Blackwater, and the Kremlin-connected head of a large Russian sovereign wealth fund, Kirill Dmitriev.

Nader, a Lebanese-American businessman, agreed to cooperate with Mueller's team after investigators stopped him at Dulles International Airport, according to a person familiar with his case.

That person and others who spoke to the AP on condition of anonymity said they could not be identified because of the sensitivity of the issues surrounding the Mueller investigation.

A lawyer for Nader declined to comment for this story.

Broidy and Nader first met at Mr. Trump's presidential inauguration on Jan. 20, 2017, according to a person with knowledge of the matter.

Both men have checkered legal histories. Nader was convicted in a Czech Republic court in 2003 of multiple counts of sexually abusing minors. Broidy, a businessmen and prolific Republican fundraiser, was sidelined for a few years after he pleaded guilty to bribery in a case stemming from an investment scheme involving New York state's employee pension fund.

Broidy later re-emerged as a player in GOP politics. During the 2016 Republican presidential primary, he raised money for U.S. Sen. Lindsey Graham, Sen. Marco Rubio and Sen. Ted Cruz. After Cruz bowed out of the race, Broidy signed on to help Mr. Trump during the 2016 election and beyond, co-hosting fundraisers across the country.

The meeting between Broidy and Nader at the dawn of Mr. Trump's presidency soon led the two to work together in an effort to shift U.S. policies on the Middle East.

On April 2, 2017, Nader asked Broidy to invoice his Dubai-based company for $2.5 million, according to someone familiar with the transaction who spoke on condition of anonymity.

On the same day, Broidy attached an invoice for that amount from Xiemen Investments Limited, a Canadian company directed by a friend. The money was forwarded to his own account in Los Angeles from the Canadian account, the person said. It was marked for consulting, marketing and advisory services, but was actually intended to fund Broidy's Washington advocacy regarding Qatar, two people familiar with the transaction said. The financial transaction and the White House meetings were first reported by The New York Times.

It was on May 23, 2017, when Royce, a 13-term Congressman, appeared at a conference on Qatar's ties to the Muslim Brotherhood and announced that he was introducing the sanctions bill that would name Qatar a state sponsor of terrorism.

The Foundation for the Defense of Democracies, a think tank that hosted the conference, said Broidy had approached it about organizing the event. Broidy bankrolled that conference and contributed to the financing of a second conference hosted on a similar theme in October by another think tank, the Hudson Institute.

"As is our funding policy, we asked if his funding was connected to any foreign governments or if he had business contracts in the Gulf. He assured us that he did not," FDD said in a statement.

Broidy donated millions of his own money to efforts to fight Qatar, in addition to the $2.5 million from Nader, according to someone close to him, who spoke on condition of anonymity because he was not authorized to discuss Broidy's private finances.

Broidy's behind-the-scenes efforts unfolded as animosity was growing between the UAE and Qatar. These tensions came to a head when the UAE and Saudi Arabia launched an embargo with travel and trade restrictions against Qatar less than two weeks after Royce introduced the sanctions legislation in the U.S. House of Representatives.

Weeks later, Mr. Trump himself waded into the fracas, accusing Qatar of funding extremism in tweets on June 6.

Royce and a staff member met with Broidy at Washington's Capitol Hill Club to discuss the bill, according to someone who was at the meeting. An associate, who Broidy paid for some of the work, also had frequent contact with congressional staff.

Broidy's effort to cultivate allies in Congress extended beyond Royce.

Broidy has personally given hundreds of thousands of dollars to Republicans over the past decade or more. But he gave nothing during the 2012 and 2014 election cycles and just $13,500 during the 2016 cycle. Things changed after Mr. Trump's election as Broidy ramped up his advocacy on Middle East policy. Broidy has given nearly $600,000 to GOP candidates and causes since the beginning of last year when he began his advocacy push— more than in the previous 14 years combined.

Campaign finance records going back two decades show Broidy had not given any money to Royce — until he gave the lawmaker a pair of $2,700 donations on July 31, 2017.

By then, the sanctions bill was on a fast track.

The original draft considered by the Foreign Affairs Committee contained language singling out Qatar as a supporter of Hamas, a Palestinian organization that has been designated as a terrorist group by the U.S. State Department.

Soon Qatar was lobbying hard to have that language excised. Nikki Haley, U.S. ambassador to the United Nations, declared in a statement to the committee that Qatar does not fund Hamas.

According to two people familiar with the committee deliberations, both Republican and Democratic staff members reached a consensus that because of the tensions in the Gulf, the language would look like the lawmakers were taking sides. They agreed to take it out of the bill.

Qatari officials and lobbyists thought the matter had been settled, according to one lobbyist and a committee staffer. But just before the bill was to be put up for debate ahead of the committee's vote, Royce ordered the language on Qatar not only reinstated, but strengthened, they say. The bill was approved by the committee in November with the stronger language on Qatar intact.

A Royce aide, who spoke on condition of anonymity because he was not authorized to comment, denied that Royce had ever considered removing the Qatar language.

In January, Royce announced that he would not seek re-election, saying that he wanted to focus on his committee in the last year of his chairmanship rather than a political campaign.

In the same month, Broidy's company signed the hefty contract with the UAE government for gathering intelligence, according to someone familiar with the work.