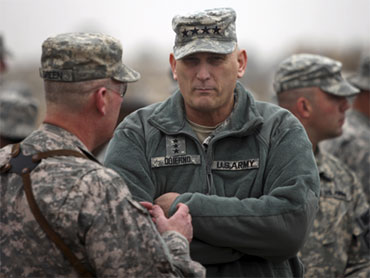 This week is all about Afghanistan - the uneasy partnership with President Karzai and the upcoming offensive in Kandahar - but that other war, Iraq, keeps hanging around.

First the delay in the Iraqi elections and then the dispute over the results has forced Gen. Ray Odierno, the commander in Iraq, to slow down his withdrawal plans, which are geared to meeting a deadline of getting down to 50,000 troops by Sept. 1.

There are currently 94,000 U.S. troops in Iraq, meaning Odierno will have to send 44,000 home over the next three and a half months to meet the deadline. Right now, it is still possible to move that many troops - but just barely. Any further delay in the drawdown will cause him to miss the deadline.

Measured by dollars, the shift has already occurred. In February, the Pentagon spent $6.7 billion in Afghanistan and $5.5 billion in Iraq, the first time Afghan war costs have topped Iraq.

Tomorrow, Defense Secretary Robert Gates, Joint Chiefs Chairman Mike Mullen and Afghan commander Gen. Stanley McChrystal are taking President Karzai to Fort Campbell, Ky. to meet members of the 101st Airborne who are on their way to Kandahar for the decisive battle of the Afghan. war The coming battle for Kandahar is as important to the outcome in Afghanistan as the battle for Baghdad was to Iraq.

Today, at the Pentagon, Gen. McChrystal said it would be the end of the year before the U.S. will know whether it's winning or losing in Kandahar.

Obama: I Am Accountable for Civilian Casualties

What Both Sides Want from Karzai's U.S. Visit