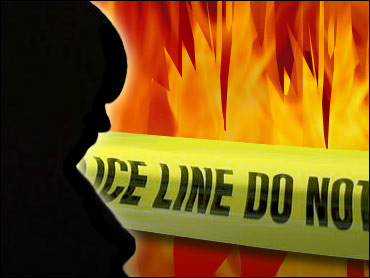 A man has been charged with stabbing and strangling his two stepdaughters in what police describe as ritual slayings at the family's home in Sioux City.

Lawrence Douglas Harris Sr. was charged with two counts of first-degree murder after authorities arrived at his burning home and found the girls in their second-story bedroom and blood on Harris, police said Monday.

Police Lt. Marti Reilly said Harris had been performing "some strange ritual" and told officers he cast a spell that had gone bad. Reilly said he could offer no other details on how the girls were killed.

The victims include Kendra Suing, 10, and her sister, Alysha Suing, 8, whose bodies were found Sunday afternoon. An official cause of death won't be available for several days, Reilly said.

The fire, which started in the basement of the home, caused only superficial damage, Reilly said. The cause of the fire remained under investigation.

"He was the only adult present at the scene," said Police chief Joe Frisbee. "His statements indicated that no other person was present who could have committed the murders," reports CBS News affiliate KMEG-TV.

The girls' mother, Marla Harris, was at work at the time, Reilly said.

Harvey Hansen, the girls' grandfather, says, "I mean he loved them, hugged them and did pretty much everything with them as far as I know," reports KMEG-TV.

Family and friends helped Marla Harris move out of her home on Monday. She says she cannot live in a murder scene.

Reilly said the family had moved to the community within the past year and that police had no prior contact with the family.

Reilly said he didn't know what, if any, weapons were found in the home.

He referred further questions to Capt. Melvin Williams, lead investigator in the case. A telephone message left for Williams on Monday afternoon was not immediately returned.

Harris was being held in the Woodbury County jail under $2 million bond.

Suspect Larry Harris will back in court for a preliminary hearing on January 17.