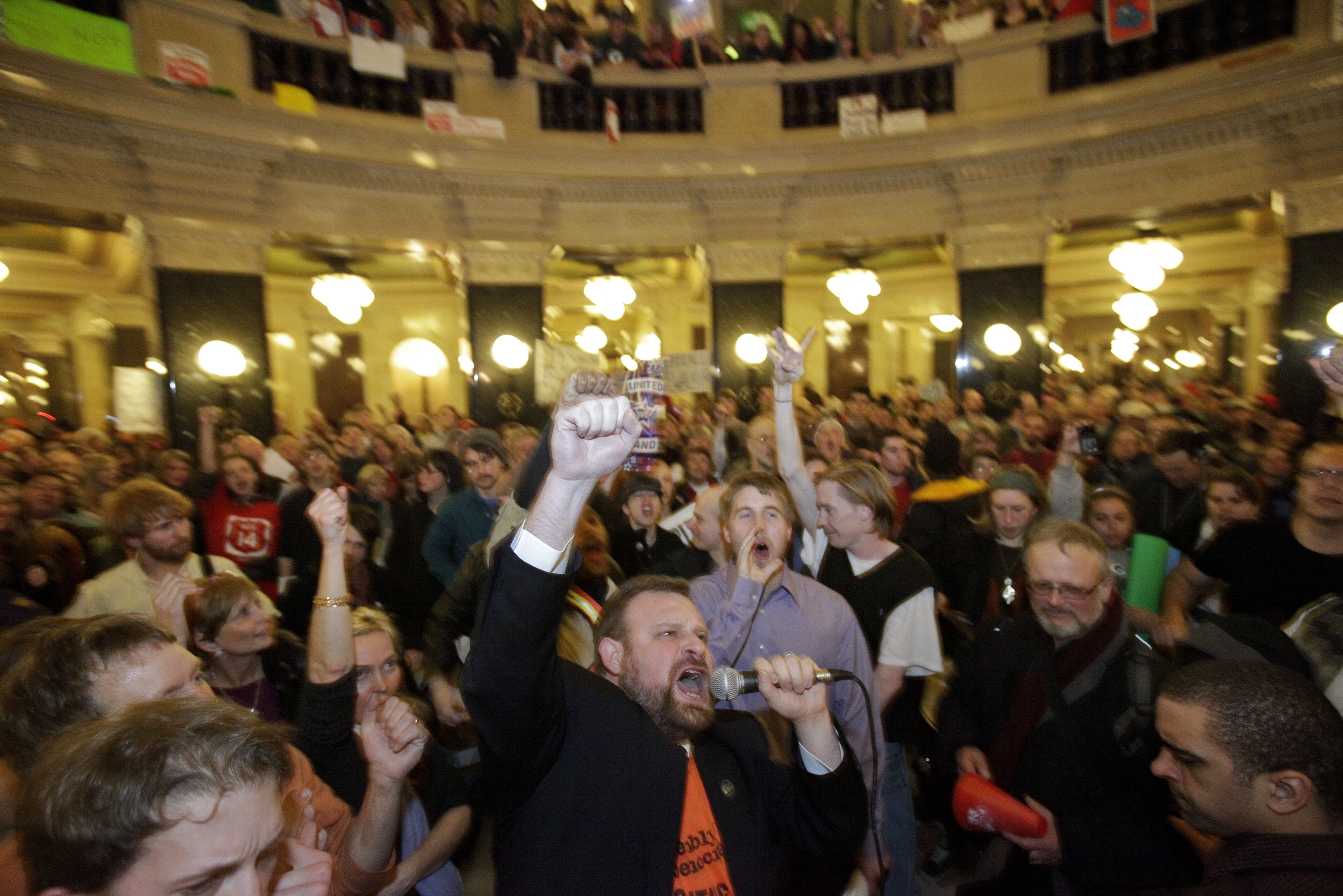 Republican state senators in Wisconsin last night pulled a legislative maneuver that allowed them to pass a controversial anti-union measure -- but the battle over union rights appears far from over.

Protesters are still flooding the Madison capitol battle in protest of the bill. Democratic lawmakers are questioning the legality of the Republicans' move. Recall efforts against several politicians are underway. And political groups are all the while raising money off of the events.

And the conflict is taking a dangerous turn -- Republican Wisconsin Senate Majority Leader Scott Fitzergerald's office announced that the GOP leader received a death threat in an e-mail today, the Milwaukee Journal Sentinel reports. Below is an excerpt from the e-mail:

"This is how it's going to happen: I as well as many others know where you and your family live, it's a matter of public records. We have all planned to assult (sic) you by arriving at your house and putting a nice little bullet in your head. However, this isn't enough. We also have decided that this may not be enough to send the message. So we have built several bombs that we have placed in various locations around the areas in which we know that you frequent..."

A spokesperson for Fitzgerald told the Journal Sentinel that the e-mail was turned over to state's capitol police, and that the GOP leader has been the target of other threats in recent weeks, including protesters who banged on the windows of Fitzgerald's house at 6 a.m.

Protesters have been demonstrating in Madison and elsewhere in the state since mid-February, when the state legislature first took up Republican Gov. Scott Walker's so-called "budget repair bill." The measure was intended to help close the state's budget gap but included controversial elements, like a provision to scale back public workers' benefits and dramatically limit their collective bargaining rights.

Democratic state senators fled the state to deprive the state Senate the quorum needed to pass any spending-related bill. In a press conference today, Walker called the senator's departure a "dirty trick." (Watch at left.)

In order to proceed without them, Republicans last night removed the more overt spending elements and passed a pared-down bill.

The newly-approved legislation includes elements that would seem to impact the budget, such as the provision requiring public workers to pay more for health care and pensions, though the bill is ostensibly not budget-related. It also included the limits on collective bargaining rights -- the part of the bill that has drawn the loudest outcry.

The bill was expected to pass in the state Assembly today, but protesters packed the capitol building this morning and blocked access to the Assembly vestibule, Wispolitics.com reports. The Assembly was slated to take up business at 11 a.m. and had been expected to quickly pass the new bill. However, Assembly Republican leader Jeff Fitzgerald released a statement saying the session would be delayed until the building was properly secured.

Walker said this morning he would sign the bill into law "as quickly as I can legally."

Democrats are questioning whether the bill was passed legally in the state Senate, however. Last night, as state Senate Republicans voted on the bill, Democrats present screamed that the Republicans were violating the state's open meetings law, which requires 24 hours notice for a public meeting of the conference committee.

"This is a violation of law!" Assembly Minority Leader Peter Barca screamed as Republicans ignored him, the Journal Sentinel reported.

Meanwhile, liberal groups are mobilizing their supporters against Republicans in the state. The Progressive Change Campaign Committee and Democracy for America raised $200,000 since last night alone (and a total $750,000) to air a television commercial in support of the unions. The commercial also goes after Republican state senators facing recall elections. All eight Senate Republicans vulnerable to recall efforts as well as six Senate Democrats are facing recalls.

The Democratic Senatorial Campaign Committee also sent out an e-mail to its supporters that says, "This is a blatant attack on Wisconsin's middle class workers, and Democrats will NOT stand by silently as it happens." The e-mail asks supporters to sign a petition and includes a link soliciting contributions.