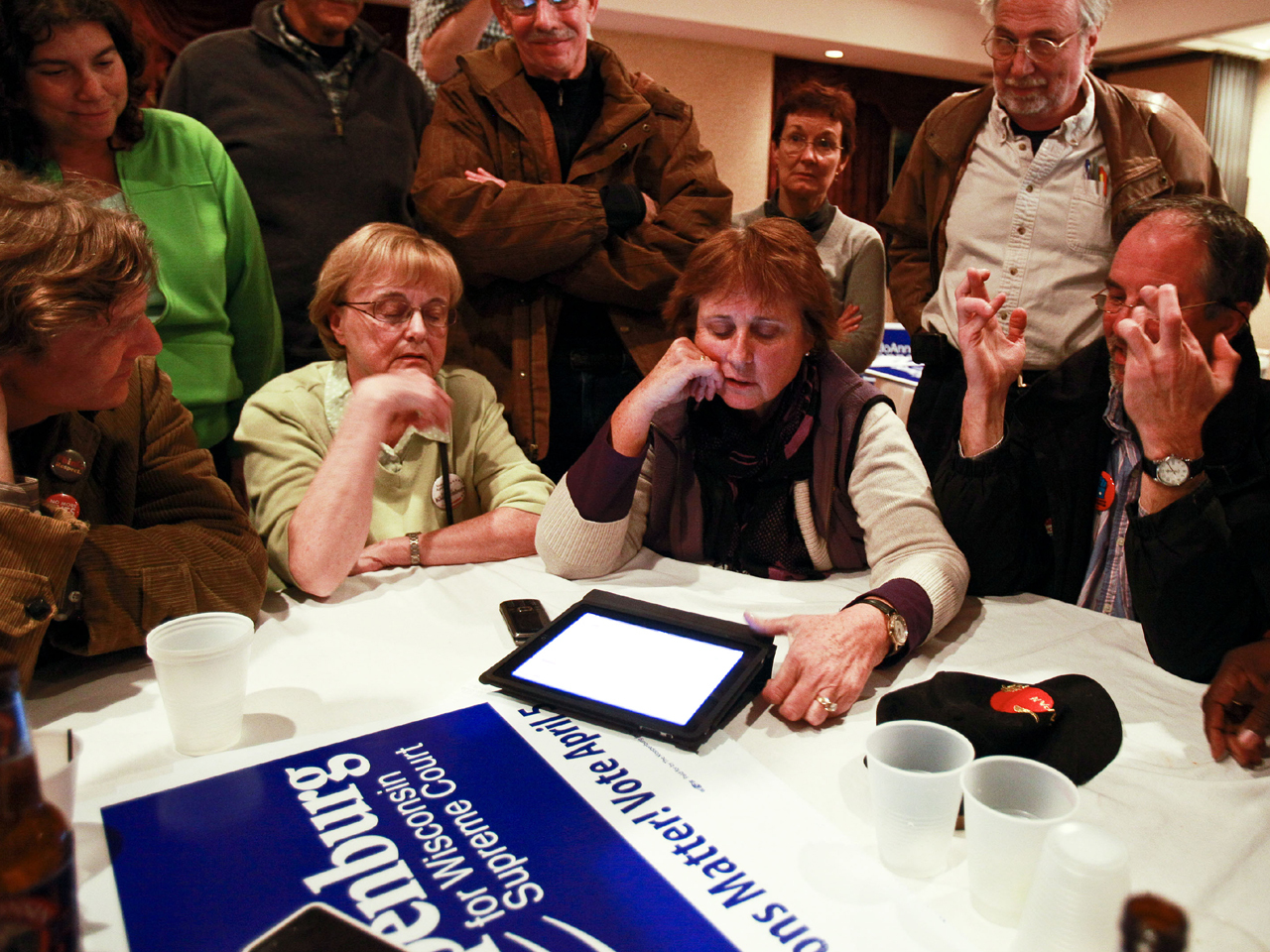 MADISON, Wis. - A little-known prosecutor who tapped voter unrest in a race to unseat a Wisconsin Supreme Court justice has taken a slight lead as late election returns trickle in.

The election that turned into a referendum on Republican Gov. Scott Walker's polarizing proposal restricting union rights remains too close to call.

Under Wisconsin election law, a candidate has three days after the official results have been tallied to request a recount. The candidate must specify a reason for the request, such as a belief a mistake was made in the counting or some other irregularity.

Turnout shattered predictions, fueled largely by the efforts to make the election more about Walker and the union fight than the officially nonpartisan Supreme Court race itself.

An assistant state attorney general, Kloppenburg began her campaign with almost no name recognition and faced what looked like an uphill fight against Prosser.

But her campaign has surged in recent days as her supporters worked to focus anger over Republican Gov. Scott Walker's divisive collective bargaining law onto the conservative-leaning Prosser. The law's opponents hope a Kloppenburg victory will tilt the Supreme Court to the left and set the stage for the court to strike down the law. Election officials in Madison and Milwaukee have noted higher voter interest in what would have been an otherwise sleepy contest.

The measure strips most public workers of nearly all their collective bargaining rights. Walker has said the move is needed to help balance the state's budget. Democrats say it's designed to cripple unions, which are among their strongest campaign supporters, and tens of thousands of people spent weeks at the state Capitol protesting the plan.

The law eventually passed, but is on hold as legal challenges make their way through the courts. Many expect the state Supreme Court ultimately will decide the issue.

The seven-member high court is officially nonpartisan. But Prosser, who is seeking a second 10-year term, is seen as part of a conservative four-justice majority. Kloppenburg's allies have presented her as an alternative that would tilt the court's ideological balance to the left.

Prosser has told The Associated Press he doesn't necessarily agree with the law. Still, bitter Democrats have portrayed him as a Walker clone, helping Kloppenburg's campaign gain traction over the last few weeks.

Pat Heiser, 76, said the union struggles weighed heavily on her decision to vote for Kloppenburg.

"I think collective bargaining should be a human right," Heiser said. "We're not slaves anymore; that ended in the 1860s."

Attorney Bill Finke said he normally votes conservative, and supported Prosser in part because he feared Kloppenburg had a political agenda.

"I'm concerned about having an activist judge on the court," said the 73-year-old from Bayside in suburban Milwaukee.

Outside groups, including the Tea Party Express and national labor organizations, have poured at least $3.1 million into a race that initially wasn't expected to be competitive. Prosser won a nonpartisan February primary with 55 percent of the vote, while Kloppenburg finished second out of four candidates with just 28 percent.

Walker has said he wouldn't interpret the election results as either an endorsement or indictment of his policies.

Witzel-Behl predicted a 60 percent turnout, which would be a record high for an April election since Madison started keeping records in 1984. Madison also has hotly contested mayoral and county executive races, but political observers suspect the statewide race is driving many local voters.

Statewide voter turnout reached 33 percent, shattering the pre-election prediction of 20 percent from the Wisconsin Government Accountability Board. April elections in recent years have had voter turnouts ranging from 18 percent to 21 percent.

The race was on track to be the most expensive Wisconsin high court contest in history. Groups backing both candidates spent $300,000 to $400,000 per day on TV ads right up until election day, according to a group that studies judicial spending.

Wisconsin has a recent history of costly Supreme Court races. Outside groups spent a then-record $3.4 million here in 2008, according to the Brennan Center for Justice, a New York University program that tracks spending on judicial races. After a quiet 2009 race and no race in 2010, spending this year reached a new high — $3.5 million through Monday.