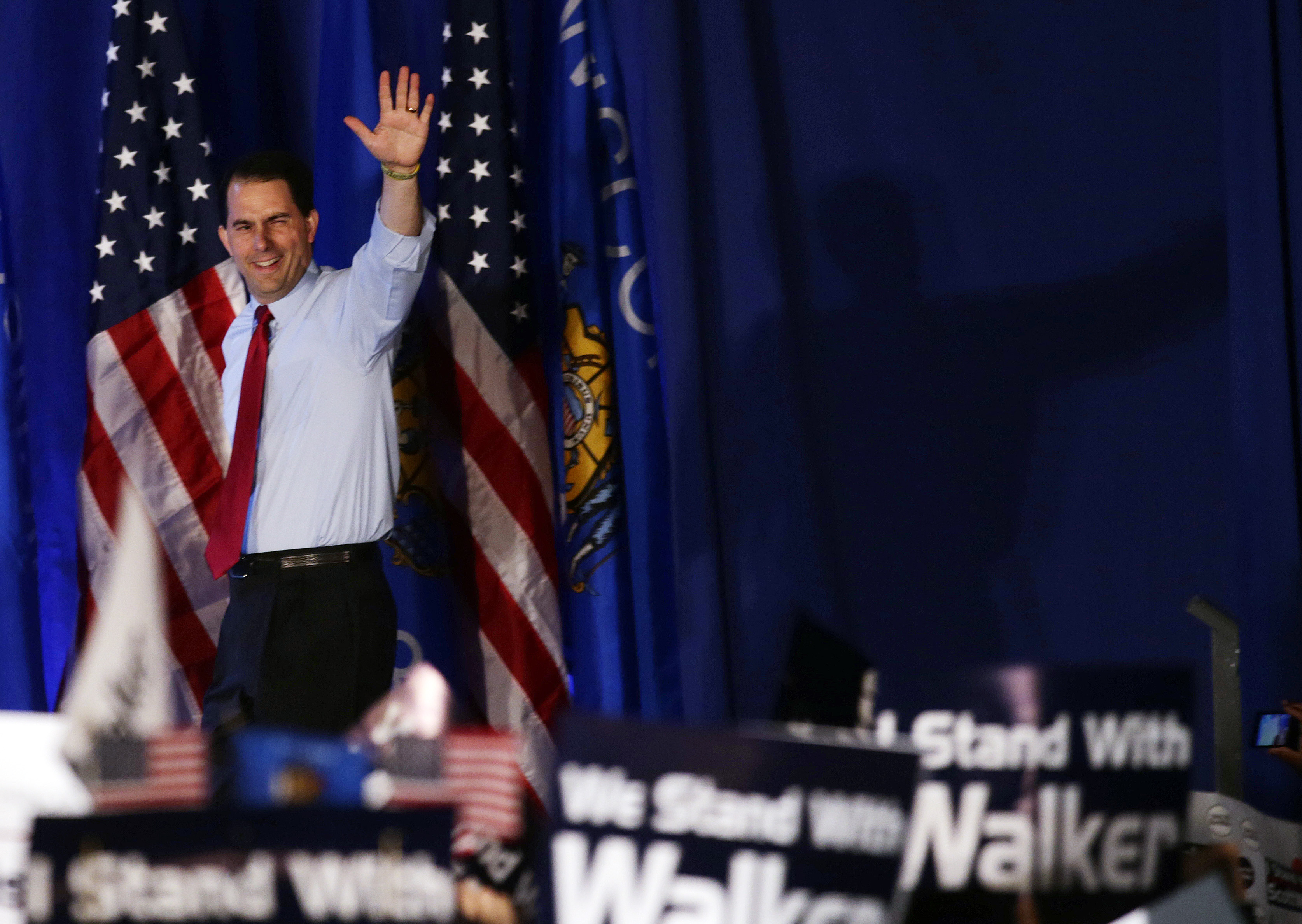 This analysis originally appeared on Slate.

(CBS News) Republican anti-tax activist Grover Norquist sees a Wisconsin business opportunity for Mitt Romney now that Governor Scott Walker has survived. Walker built a network of campaign offices across the state. Romney should mount a friendly takeover. "The smart move for the Romney campaign would be to take over those same staff and don't let them shut down," says Norquist. "In Wisconsin they have the best turnout operation in history. They've been exercising all year. They're excited and they're cheerful."

Can Mitt Romney compete in the battleground state of Wisconsin? The political calculus is complicated. Republicans may have built a state-of-the-art machine for identifying and persuading voters, and they've had chances to repeatedly test it, but no Republican presidential candidate has won in Wisconsin since 1984. Walker's campaign offices might work for Romney, but his voters won't necessarily transfer in the general election. Exit polls on Tuesday showed Obama beating Romney by 11 points (though the validity of these exit polls is up for debate).

From an ideological perspective, though, Romney should rush to Wisconsin and plant the flag. It is the home of two GOP superstars--Scott Walker and House Budget Chairman Paul Ryan--known for their boldness and perseverance. Romney says that he will be just as bold. If he ran loud and proud in Wisconsin it would send a message that he's going to govern in the same audaciously conservative mold as the state's favorite young guns. It would also be totally out of character for a candidate as risk-averse as Romney. When you think of Romney, the expression "loud and proud" doesn't come to mind.

Wisconsin isn't just any other battleground state, and Walker's victory wasn't just a victory for a person but for a GOP political philosophy of courageous conservatism. As Virginia Gov. Bob McDonnell wrote on Twitter: "Tonight, Wisconsin voters rewarded political courage."

Wisconsin's marquee politicians embody the key criteria required for heroism in Republican ranks these days: taking a bold stand and sticking to it no matter how strong the opposition. Chris Christie has a reputation for toughness in New Jersey, but Walker has faced the full force of organized labor and liberal outrage. Ryan has been the centerpiece of President Obama's attacks on Congressional Republicans more than arguably any other Republican in Washington. "Reince [Priebus] talks about candidates who are true to their word and campaign on issues and govern as they campaigned," says RNC political director Rick Wiley, quoting his party chairman--who also happens to be from Wisconsin. "Scott Walker and Paul Ryan are poster children for that."

Romney agrees with Walker and Ryan on the substance. The Wisconsin test is whether he will act like them. Will he try to finesse Republican ideas past voters with vague proclamations or campaign on them as Walker and Ryan have? This is also a test of the conservative agenda. If Romney chooses to run in the manner of Walker and Ryan, can he survive?

Rush Limbaugh reports (!) that in private, Romney said he will be so bold it might make him a one-term president. But so far his campaign hasn't acted that valiantly. Mitch Daniels, the governor of Indiana who preaches a version of the Wisconsin doctrine, has argued that Romney needs to be clearer about what he's going to do if for no other reason than to build a mandate for his eventual actions. Daniels is pointing to the difference between winning an election based on being anti-Obama and winning an election based on ideas.

Romney was timid about the Walker recall out of political necessity. (He didn't say a word after the GOP primary in April.) Just like President Obama, Romney didn't want to meddle in a local fight and risk having the outcome over which he has little control be seen as a vote about him. Neither campaign has advertised in the state.

Now that Walker has won, will Romney embrace him? Bill Kristol argues that he should rush in for the belly-hug. Kristol writes that the campaign should "associate Mitt Romney with Governor Walker's success--and the successes of other governors--in making the case for a national agenda of conservative reform of a bloated and bankrupt welfare state."

Indeed, immediately after the Walker victory, Romney called the new GOP hero and issued a tough-talking (for him) statement: "Governor Walker has shown that citizens and taxpayers can fight back--and prevail--against the runaway government costs imposed by labor bosses. Tonight voters said 'no' to the tired, liberal ideas of yesterday, and 'yes' to fiscal responsibility and a new direction. I look forward to working with Governor Walker to help build a better, brighter future for all Americans."

Romney has already embraced the other Wisconsin GOP hero, Paul Ryan, and Ryan approved of Romney's Medicare reform proposal during the primaries. Romney campaigned with Ryan during his Wisconsin battle against Rick Santorum, and Tuesday Ryan held an event in North Carolina for Romney. This might have been a vice presidential try-out or it might just have been a way to use a party superstar to raise some dollars.

But if the moral of the Wisconsin Republican story is that politicians who run with gusto on conservative ideas can win the day, then Romney needs to pick it up a notch. His embrace of the specifics of Ryan's plan has been spotty at best. When one of his advisers was asked about it this past Sunday, he said that Romney supported Ryan but had his own plan. True enough, but Romney's own plan is not nearly as robust and detailed as Ryan's blueprint. It is the expectation among Republicans like Norquist and in Congress that Romney's job as president will be to simply sign the Ryan budget. If that's true, and the Wisconsin lesson is that boldness pays off, then Romney should promise to sign it on his first day in office.

That would be extraordinary, because the political risk calculation is more complicated than the hero storyline suggests. Walker's race was brutal and required a massive resource advantage. Ryan's budget plan, while not the liability Democrats initially predicted, is credited with helping Democrats win a Republican seat in New York's 26thdistrict. No matter how exhilarating the Wisconsin narrative may be, Romney also knows details kill. And it's clear that President Obama is ready to pounce. He and Vice President Biden have been trying for months to wrap Romney in the Ryan plan.

The sweet spot for Romney is to associate himself with the Ryan plan in general but never get pinned down on the specifics. In 2010, House Speaker John Boehner did not include the full Ryan plan in his pitch to voters called "Pledge to America," because he knew that specificity would give Democrats something to attack. Ryan knows this, too. That's why Ryan talks about closing tax loopholes but doesn't pick which ones. (There are lists.) When Romney was overheard by reporters at a fundraiser mentioning a few of the puny tax loopholes he'd think about snipping, his campaign said he was merely repeating some ideas he'd heard.

Romney is still making his transition from primary to general election candidate. The boldest thing he has done so far as Obama's opponent is visit an inner-city Philadelphia school. There he met with some resistance to his conservative ideas. Will he run on a bold set of ideas of the kind championed by the Wisconsin duo now that he is not trying to court GOP voters alone? It remains to be seen. If he does, he'll know the best state in which to make his stand.

The Dictator Slayers
Why the Chinese Communist Party Is Afraid of a Flower
The Obama Gay Marriage Bounce Is Steady, Racially Broad