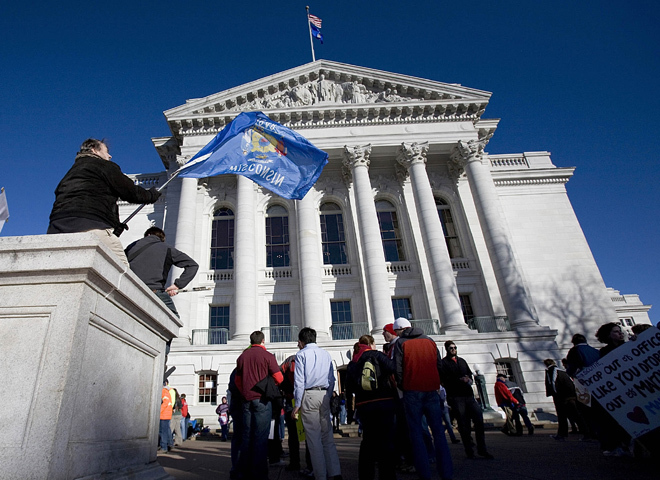 MADISON, Wis. - The Wisconsin Republican Senate Majority Leader said today that a provision of the budget bill taking away collective bargaining rights from public employees is not negotiable.

Democrats and union leaders say they're willing to agree to parts of the proposal that would double their health insurance contributions and require them to contribute 5.8 percent of their salary to their pensions. However, they want to keep their collective bargaining rights.

But Republican Scott Fitzgerald said Saturday that the terms of Governor Scott Walker's proposal are not negotiable, and that the bill will pass as-is.

He is calling on Democrats who left town Thursday to return to take up the bill.

Meanwhile, police are anticipating what could be largest crowds seen yet in the week-long demonstrations against Wisconsin Governor Scott Walker's proposal to eliminate public employee unions' right to collective bargaining.

Crowds swelled to an estimated 40,000 on Friday as pro-labor protesters - including thousands of teachers, grade school children, firefighters and college students - protested the Republican governor's plan.