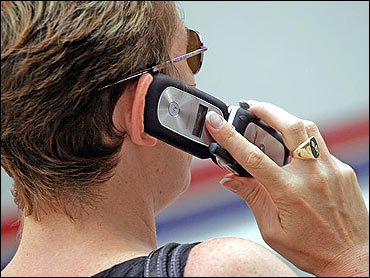 There's one obvious lesson learned from the earnings news of America's biggest wireless carriers: people can't do without their cell phones, even when times are bad.

This week AT&T and Verizon Communications each reported strong growth in their cell phone businesses. Verizon saw a profit gain of 15 percent, largely boosted by its growing wireless service. Despite a 26.3 percent drop in profits, which was mostly attributed to increased expenses, AT&T managed to grow revenue across the board with wireless providing the biggest benefit.

"We think we had a very solid quarter and an excellent year," Verizon's CEO Ivan Seidenberg said during a conference call on Tuesday. "And we see no reason why the momentum we have developed in 2008 should not continue in some way in 2009. We don't have perfect visibility in the economy, so the level of success could be tempered. But we think we will perform well absolutely and relatively."

But aren't we in a recession?

Indeed, the U.S. is sinking deeper into what looks like possibly the longest and roughest recession in a lifetime. Thousands of jobs have already been shed with the U.S. Labor Department reporting this week that unemployment rose in all 50 states for the first time since the bureau began keeping such records in 1976. And in some states, such as Michigan and Rhode Island, unemployment rates are above 10 percent.

These numbers all sound bleak, but the truth is that despite the troubled economy, Americans are still spending money on wireless and broadband services, which is helping to keep phone companies much healthier than other industries.

That said, the industry is feeling the pinch. Specifically, phone companies are seeing a more rapid decline in their traditional telephone businesses. And they're seeing a slowdown in providing corporate communications services.

Instead, consumers are relying more on their cell phone service. And many are substituting new voice over IP services for their old phone service. But signing up for new VoIP services, requires a broadband connection, which are services that AT&T and Verizon also sell. Verizon has even just launched a new voice over IP product and service specifically designed to address this market.

"We are transitioning services right now," Rick Lindner, chief financial officer for AT&T, said on a conference call on Wednesday. "We are taking cost out of the legacy parts of our business, and at the same time gaining scale and working to improve margins on our growth products, (such as IP services)."

Another area where AT&T and Verizon are seeing some weakness is in the business market. These carriers sell a whole slew of services to businesses around the world, including long distance telephony, wireless data services, and managed Internet services. As one might expect, as these corporate customers layoff employees and cut expenses, they are reducing the amount of money they spend on phone and data services, which ultimately hurts the phone companies' growth.

Spending more on wireless
Meanwhile, consumers are actually increasing how much they spend per month on their cell phone service. This increase in spending is not coming from voice services. Instead, it's coming from data. People are actually upgrading to more expensive smartphone devices that require data plans.

Denny Strigl, chief operating officer for Verizon, noted on the company's conference call Tuesday that 37 percent of new devices sold during the quarter were smartphones. As a result, Verizon Wireless also reported that it increased the average revenue per user, or ARPU, for data services to $13.99 in the fourth quarter of 2008.

AT&T also reported that its customers are spending more on data services. It increased data ARPU to $13.50 during the quarter. Apple's iPhone 3G, which is exclusively sold by AT&T, was likely the biggest contributor to AT&T's 35 percent year-over-year growth in data ARPU. AT&T announced that it added 1.9 million new iPhone subscribers during the quarter. The company has added a total of 4.3 million iPhone subscribers over the past two quarters.

Each of these iPhone subscribers has agreed to a two-year contract that locks them into a $30 per month all-you-can-eat data plan. Due to this extra data fee, most iPhone users are spending about $100 per month on their service, which is about 1.6 times more than the average AT&T cell phone subscriber.

"The iPhone along with integrated devices are proving to be fairly resilient in what is considered a tough time," Randall Stephenson, chief executive officer for AT&T during the conference call. "Right now, we feel pretty good about wireless."

The high-end smartphone appears to be serving as both a replacement for traditional phone services as well as a potential alternative to broadband service for some customers. This fall ComScore published a report that found households making between $25,000 and $49,999 a year were the fastest-growing segment of iPhone purchasers for the June through August time period.

"As an additional household budget item, a $200 device plus at least $70 per month for phone service seems a bit extravagant for those with lower disposable income," ComScore senior analyst Jen Wu said in a statement. "However, one actually realizes cost savings when the device is used in lieu of multiple digital devices and services, transforming the iPhone from a luxury item to a practical communication and entertainment tool."

If consumers opt to dump their broadband connections at home for the iPhone or some other smarthphone with Internet access, it could have a negative effect on overall wire-line growth for the phone companies. But so far, that hasn't been the case.

In fact, AT&T and Verizon reported for the fourth quarter stronger than ever sales of their new data and TV services that operate over their newly upgraded networks.

AT&T added a total of 264,000 new TV subscribers in the fourth quarter, up from 232,000 added in the third quarter of 2008. The company now has more than 1 million subscribers for this service.

"We understand we are operating in a difficult environment," said Stephenson. "But we have demonstrated that we have competence in managing through times like these. And we're committed to building a strong company."

Sprint and T-Mobile to benefit
So what does this good news mean for the other two major wireless phone companies, Sprint Nextel and T-Mobile USA?

These operators should also benefit from the fact that during the economic downturn, people are less likely to cancel or reduce service. And these companies will also likely benefit from the trend toward smartphones and more data usage.

T-Mobile, which is still rolling out its 3G wireless network, is selling Google's Android G1 and Sprint has just announced it will be the exclusive carrier for Palm's Pre, a phone that many believe could be a strong competitor to the iPhone.

But more than the economy, these companies will be battling stiff competition. AT&T added 2.1 million subscribers during the fourth quarter. Stephenson said during the conference call that he expects AT&T to have taken market share from its competitors, since it managed to port more numbers to its service from other carriers than it ported to competitors.

Sprint, in particular, has been struggling for several quarters before the economic crisis in the U.S. hit. And it has been trying to cut costs for more than a year. On Monday, the company announced it would lay off 8,000 workers, or 15 percent of its workforce. But the company had already shed 4,000 workers in 2008.

The deepening economic crisis might help Sprint and T-Mobile attract more value customers. Sprint offers a $99 all you-can-eat voice and data plan that might appeal to consumers. It also has a strong pre-paid brand, Boost.

T-Mobile has also been seen as a value provider and could attract customers with its @Home wireless services that allow mobile subscribers to switch to Wi-Fi when in a wireless hot spot. It also offers a home phone replacement service called Hotspot @Home Talk Forever that allows its wireless customers to add a voice over IP service for $9.99 a month on top of their cell phone service.