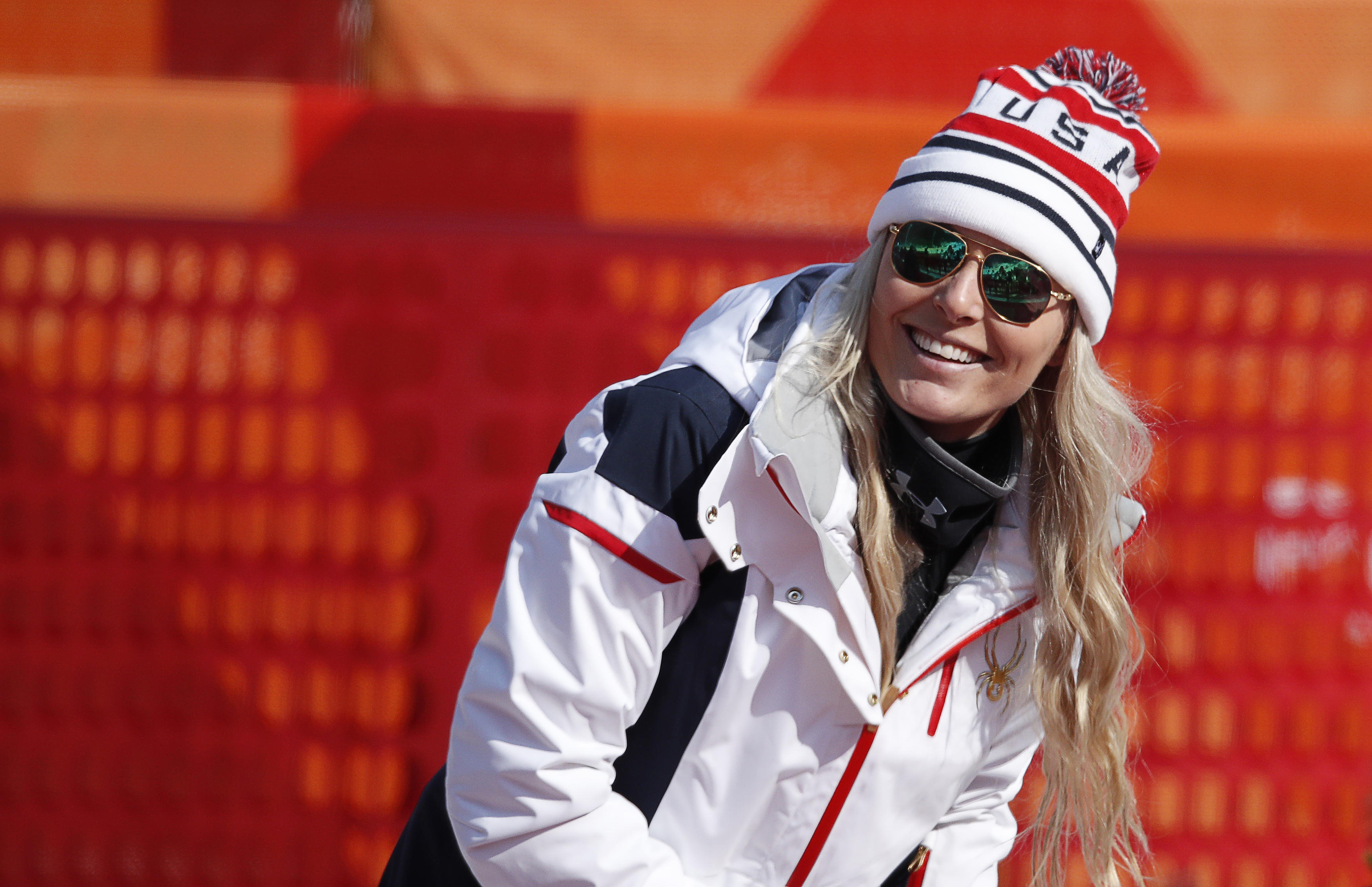 The Winter Games featured some action-packed events Tuesday in primetime. Team USA's Lindsey Vonn took home the bronze medal in the women's downhill. She won gold in the event in 2010.

Also, the United States had three competitors in the figure skating short program: Bradie Tennell competed in the first group, with Mirai Nagasu and Karen Chen taking part in the fourth.

In addition, the U.S. men's hockey team sought to avoid being eliminated from the games when it took on the Czech Republic.

Scroll below to see the latest updates as they happen. All times are Eastern unless otherwise noted.

Norway has defeated defending champion the Netherlands with an Olympic record speedskating race and will face South Korea in the final of the men's team pursuit.

Outsider New Zealand, which pushed the South Koreans until the final half-lap, will face the Netherlands for the bronze medal.

The Dutch changed their team for the semifinals after a disappointing performance by Koen Verweij and picked 1,500-meter silver medalist Patrick Roest to go instead.

The Norwegians won over eight laps by 1.38 seconds and finished in an Olympic record time of 3 minutes, 37.08 seconds.

Dutch rider Jan Blokhuijsen seemed to be hampered by a faulty clapskate. Coach Geert Kuiper says a spring broke at the start of the race, making skating more difficult.

Defending champion the Netherlands will face Japan in the final of the women's speedskating team pursuit, with both teams cruising in the semifinals.

It will be a North American battle for bronze, with the United States facing Canada.

The Dutch, led by Ireen Wust, took an early lead over the United States and never had to push, since the U.S. team, with Brittany Bowe sitting out the semifinal, was clearly seeking to conserve energy for the bronze-medal race.

And after six laps, the Dutch could already see the slow U.S. riders in the same lane as they cruised to at least a silver medal.

Japan was pushed a bit harder by Canada but steadily built up a comfortable lead, taking any excitement out of the second semifinal, too.

5:30 a.m. U.S. gets its 1st gold ever in women's cross-country skiing as Norwegian sets historic mark

The United States has won its first Olympic gold medal in women's cross-country skiing, and Norwegian skier Marit Bjoergen has become the most decorated Winter Olympian of all time by taking bronze at the Pyeongchang Games.

The Americans posted the fastest time in the semifinals to start on the front row in the finals Wednesday. Jessica Diggins passed the Swedes and the Norwegians on the final lap to make history in a major upset.

Bjoergen now has won 14 career medals at the Winter Olympic Games, passing Norwegian biathlete Ole Einar Bjourndalen for the most ever. The 37-year-old previously took gold in the women's 4x5-kilometer relay, silver in the 15-kilometer skiathlon and bronze in the 10-kilometer freestyle at Pyeongchang.

The Russian men's hockey team has swept aside Norway 6-1 to set up a semifinal against the Czech Republic.

Russia charged to a 3-0 lead at the end of the first period, outshooting Norway 19-2, and remained in control throughout the game as chants of "Red Machine" and "Russia" echoed around the half-empty Gangneung Hockey Center.

Nikita Gusev finished with a goal and two assists, while Slava Voynov had a goal and an assist.

After the disappointment of losing in the quarterfinals at home in Sochi four years ago, the "Olympic Athletes from Russia" - as they're called due to International Olympic Committee sanctions over doping - are now guaranteed to play for a medal.

No Russian hockey team has won a medal since 2002.

Brady Leman has earned gold for Canada in men's skicross, beating Switzerland's Marc Bischofberger in a wild final at the Pyeongchang Olympics.

Leman took the lead early during Wednesday's last round and then held off Bischofberger in a two-man duel after Canada's Kevin Drury and Russian athlete Sergey Ridzik collided early on.

Ridzik picked himself up and raced down for bronze.

The elimination rounds included a handful of frightening crashes that forced several men to leave the course wrapped up in a medical sled.

The worst came when 2011 world champion Chris Del Bosco lost control in mid-air late in the run. The right side of the Canadian's body slammed hard into the snow and he lay motionless for several minutes before emergency personnel carefully placed him on the sled.

Zagitova scored 82.92 points, breaking the mark of 81.61 that Medvedeva had set about 15 minutes earlier. Both scores topped the short program record Medvedeva set earlier in the Pyeongchang Games.

Kaetlyn Osmond of Canada was third with 78.87 points.

The American trio of Mirai Nagasu, Karen Chen and Bradie Tennell struggled with early mistakes in each of their programs. Nagasu was ninth with Chen and Tennell right behind her.

Tennell fell during her opening jump combination, a mistake so rare that the reigning U.S. champion couldn't remember the last time it happened.

Nagasu fell trying to land her signature triple axel, which she pulled off in the team event but is so hard that nobody else in the competition attempts it.

Chen bobbled her opening triple lutz, which was supposed to feed into a triple toe, forcing her to adjust the rest of her routine to squeeze in another combination jump.

But all three Americans showed tremendous resilience in holding their programs together.

Goaltender Pavel Francouz stopped all five shooters and Petr Kouka scored the shootout winner as the Czech Republic eliminated the United States men's hockey team with a 3-2 victory in the quarterfinals.

Jan Kovar and Tomas Kundratek scored in regulation Wednesday for the Czech Republic, which was fresher after winning its group and getting a bye into the quarterfinals. The U.S. looked fatigued after facing Slovakia in the qualification round and was outshot 29-20.

Ryan Donato and Jim Slater scored for the U.S, which again was led by its youngest players, including speedster Troy Terry. U.S. goaltender Ryan Zapolski allowed three goals on 29 shots and one in the shootout. The Czech Republic's Pavel Francouz stopped 18 in regulation and overtime.

Evgenia Medvedeva, the world champion and a favorite for gold, scored an 81.61 in her short program, putting her in first place. Skating after Medvedeva was Japan's Satoko Miyahara, who landed in second place with a score of 75.94.

Mirai Nagasu became the first American woman to land a triple axel at the Olympics during the team event last week, but she fell during the notoriously difficult jump on Tuesday. She fell out of the top three after South Korea's Choi Dabin scored 67.77. Japan's Kaori Sakamoto led with 73.18 and Canada's Gabrielle Daleman took second place.

Sofia Goggia of Italy has won the women's Olympic downhill, with good friend Lindsey Vonn taking the bronze. Ragnhild Mowinckel of Norway was the surprise silver medalist after turning in a sizzling run as the 19th racer on the course. Mowinckel also earned silver in the giant slalom at these Games.

Goggia finished in a time of 1 minute, 39.22 seconds to hold off Mowinckel by 0.09 seconds. Vonn finished 0.47 seconds behind Goggia.

At 33, Vonn becomes the oldest female medalist in Alpine skiing at the Winter Games. The record was held by Austria's Michaela Dorfmeister, who was just shy of her 33rd birthday when she won the downhill and the super-G at the 2006 Turin Olympics. This is likely Vonn's last Olympic downhill race.

USA's Lindsey Vonn drops to third place in the downhill (+0.47).

This didn't hold for that long:

Vonn was clocked at skiing more than 60 mph ... but she was almost a half second behind Italy's time near the end of her run. She crosses the line and places second (+0.47) behind Italy's Sofia Goggia (1:39.22).

The team won again (after their victory in Sochi). There were numerous crashes and near wipeouts in the competition.

Italy earns the silver medal and the Netherlands capture the bronze.

After their run, Team USA (group 1, piloted by Elana Meyers Taylor) leads the bobsled competition with a 2/10 of a second ahead of Canada. They scored 40.01.

USA's Bradie Tennell takes the ice first for her short program, but she did take a tumble after an opening combo (triple lutz / double toe). She scored 64.01 (three points off her personal best).

"It was definitely unexpected," Tennell said of her fall on a triple toe loop, "but things happen. We're all human. We all make mistakes. You just have to get up and keep going."

The Russians also have strong contenders, including two-time reigning world champion Evgenia Medvedeva, who broke her own short program world record in the team event. She has lost to only one skater since 2015 -- her teammate Alina Zagitova. The medals will be awarded Friday.

Here's a look at the total medals rounded up by CBS Sports.