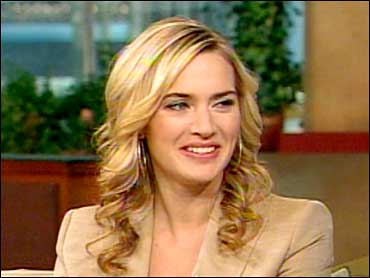 The four young actors who play her sons in "Finding Neverland" are all good actors, but she had particular praise for Freddie Highmore, who plays Peter.

"He has the most extraordinary gift, and he's very much a very normal little boy," " she told The Early Show co-anchor Rene Syler, "but he loves acting and he gets it and focused and take after take after take, he would turn out these incredible performances. He's really remarkable."

Her real-life experience as a mother helped actress Winslet master her role as the widowed mother of four whose family provided playwright J.M. Barrie, played by Depp, with the inspiration for his greatest hit, "Peter Pan."

"I'm watching myself in that clip," Winslet said "and I spend the whole movie picking up boys' hats and clothes."

The British star and parent of two said it was wonderful working with "those four wonderful boys who were so affectionate and so happy to be there every day."

The 29-year-old actress won acclaim in "Titanic," "Eternal Sunshine of the Spotless Mind," and "Sense and Sensibility." But she says the biggest stretch in her latest role was trying to play a much older woman.

"It was shot in 2002 , so I still was only 27, " she said. "You know, I was thinking, 'Gosh, you know, are we pushing it here? Because can I get away with this?' I wanted to be aged up and that is why the hair was done in that very style and the clothes. I wanted to work a lot with the costume designer and make sure that everything was quite pale and drab in color because I didn't want her to look too glamorous."

Of her character, she said, "She was a mother and in those days, those things didn't bother her. They weren't part of her day-to-day life. And I just wanted to try to make her look as old as possible, you know?"

Some Facts About Kate Winslet