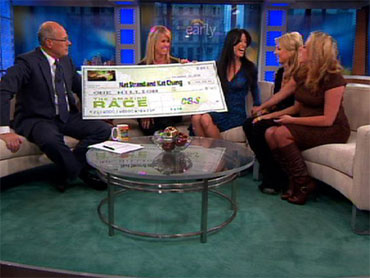 Gal-pal doctors Nat and Kat have crossed the finish line to win "The Amazing Race."

They have also made history, becoming the first two-woman team to claim the million-dollar grand prize in the 17 seasons of the CBS reality series.

Nat Strand, from Scottsdale, Ariz., and Kat Chang, from Santa Monica, Calif., were first to reach the Los Angeles destination on Sunday's finale.

Finishing in second place were a rival female duo, Brook Roberts, of San Diego, and Claire Champlin, of Reno, Nev., who are best friends and hosts on a home shopping network.

That made for the "first female Final Four!" Early Show" co-anchor Harry Smith exclaimed. All four were on the show Monday.

During the hour, the three teams had to bungee jump off a giant crane at the Port of Long Beach, decorate a float for the Tournament of Roses parade, and play a trivia contest with veteran game-show host Bob Eubanks.

The race ended on a terrace of Beverly Hills' Greystone Mansion.

The finalists covered four continents, 30 cities and 32,000 miles, "Amazing Race" host Phil Keoghan told Strand and Chang as he declared them the winners.

Speaking by phone from New York after the broadcast, Strand said, for her, one of the worst moments of the entire journey had been dropping from that crane on Sunday's episode.

But speaking of the race overall, she added, "I had no idea how hard it was going to be."

Even though she'd seen all the previous seasons, she said watching the show on TV left her unprepared for how challenging it would be as a contestant. She cited "the extreme fatigue, how hungry you get - I was surprised by how physically demanding it was."

Meanwhile, big surprises for Chang included "the bonds that we made, not only with each other but even with the other racers. We were so lucky that the others were fantastic, and we got along."

Celebrating their victory, which was actually sealed and taped at Greystone Mansion some six months ago, Chang said, "It still feels unreal. Having to keep it a secret until just a half-hour ago made it difficult for it to feel real. I could only share stories with Nat. We'd say to each other, 'Do you believe what we did?!"'

Nat and Kat got a large replica of their $1 million check on "The Early Show" from Smith.