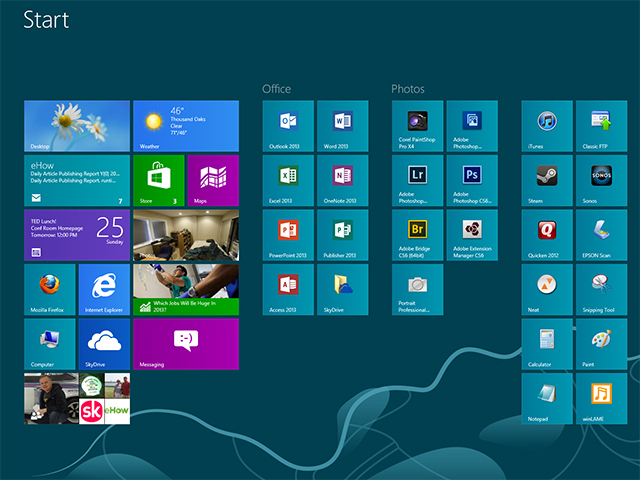 (MoneyWatch) The transition to each new version of Windows has always drawn criticism. Back in 2001, even the now-beloved Windows XP was met with widespread derision for its supposedly IQ-lowering candy-colored palette. But Windows 8, the operating system unveiled last month, is getting hit especially hard.

Last week, Internet guru Jakob Nielsen posted a scathing assessment of Windows 8. Based on a study group of 12 Windows users, Nielsen deemed Windows 8, in a word, "disappointing." Some of his key concerns:

The dual interface. For Windows 8 users, having to contend with the traditional desktop and the platform's completely overhauled "tile" interface is confusing, requiring people to remember where to go for specific features.

Lack of traditional multi-tasking. "Windows" is no longer an apt name for the operating system because users can't run modern applications side by side or have multiple windows open on the same display.

Lack of "discoverability." The flat look of the modern user interface means that people get fewer visual cues about how to interact with the PC. For example, there are no shading effect to let you know what's clickable.

Low information density. Nielsen points out that the modern interface seems to reward sparse displays. Even on a large 24-inch display, for instance, some financial news apps show only single story and three stock market quotes on its home page. That might make sense on a tablet or smartphone, but a desktop PC or laptop should make better use of space, Nielsen contends.

Live tiles are confusing. In theory, Live Tiles should make your life easier by packing the Windows 8 start screen with information so you don't always need to open apps to learn what's already in the tile. But the information overload makes tiles look alike. And since the tiles generally aren't labeled and resemble each other, it can be hard to find a specific app when you need it.

Nielsen makes a number of good points. After spending a few weeks with the final version of Windows 8, both on the desktop and on the Surface tablet, I agree that the Live Tiles are a confusing mess. Even though they're as animated as a department store Christmas display, they all tend to look alike -- especially similar ones, like a cluster of news apps. The only worse example of a user interface I can think of is the center console of a Chevy Volt, which to my eye looks like an undifferentiated grid of look-alike buttons that are all but impossible to use when driving.

But in principle, I think Nielsen's scathing assessment of Windows 8 is wrong. He's really just stating the obvious: Faced with a radically new interface, people will not automatically know how it works. Did it take a study with 12 users to figure that out? People have always needed to master new software, whether it was the first iPhone (how to rearrange and group icons was far from self-evident), right-clicking in Windows 95 or the ribbon interface in Office 2007.

Yes, Windows 8 will take some getting used to, especially knowing how to interact with a "flat" interface that doesn't have reflections and shadows. But once you learn the nuances of Windows 8, you know them. That's the magic of learning. You only have to do it once.

There's another question here, of course: Is Windows 8 worth learning at all? Does the new operating system have enough value to warrant mastering a new interface? Time will tell. Right now, the platform's utility is hurt by the lack of good apps, and without those it's hard to know if Windows 8 will succeed as a new computer paradigm for the next 10 or 20 years. When I boot up Windows 8, for instance, I go to the desktop for Office and Photoshop -- Windows 8 is little more than a new start screen for me right now.

But the aging desktop is increasingly ill-equipped to support the way people today interact with computers, so I am willing to give it a chance.

Only artists age 50 and over allowed