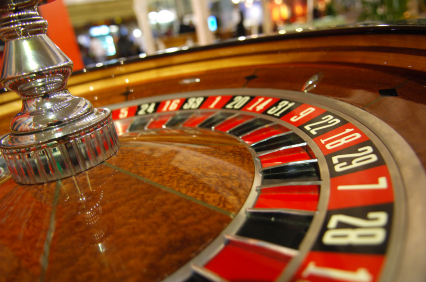 "Leave nothing to chance." That's the advertising line for Dustin Hoffman's new HBO dramatic series "Luck" that made its debut this week.

"Luck," unlike recent racetrack movies like "Seabiscuit" and "Secretariat," is not about the glamorous world of horse racing. Rather, this is the not-so-pretty reality of racing. Series creator David Milch ("Deadwood") takes a dark look at the gritty underbelly of the sport.

My namesake grandfather, Tom Searcy, was a professional gambler up until my grandmother made an honest man out of him. But Grandpa Tom never bet the ponies. He knew he didn't have any control in those bets, so he didn't like to make them. Like most entrepreneurs, he bet on himself: golf, bowling and cards.

Personally, I don't do any gambling, not even scratching a few lottery tickets. No need to. I'm a professional sales person, and that takes care of all my gambler's itch.

Most business managers I have met know a great deal about gambling. That's because every day they bet their company, careers and causes. The main question, week after week, is this: Is our company going to win or not? When managers take on projects that are long-shots, there are going to be a lot of losing bets.

Take going after a big deal, for example. What's needed is a Texas Hold'em poker approach to pursuing any big deal. If you have ever played Texas Hold'em, a game with an ante and then four rounds of betting, then you know that the players who win the most amount of money play the fewest number of hands. These players actually fold more than 92 percent of the time before the final card is dealt. They know more hands against them than in favor of them.

The game begins with each player being dealt two cards. So players must master the two-card question (Should I stay in the game or get out now?), because that is the cheapest time to fold. In Texas Hold'em, there are only four conditions when it makes sense to stay in the game and keep betting: two of a kind, two of the same suit, two in sequence, or a face card. If a player doesn't have any of those combinations, then the answer to the two-card question is to get out while it is still cheap. There are two winners in every Texas Hold'em hand: the person who wins the pot and the person who folds first. The biggest loser in a hand is the person who finishes second. They expended the most chips without getting anything in return.

The same logic is true in negotiating a big deal. Do you have quality control standards up front at the beginning of your sales process to screen your prospects? If the prospect isn't right, get out early while it is still cheap. With the right focus, a company can eliminate unworthy and unworkable prospects before the stakes get too high.

Be selective. A company should know enough about its marketplace that it can do the research in advance and not waste precious resources and time. Treat prospects like nightclubs and the velvet rope. Be choosy on who you let in. There are certain prospective deals a company shouldn't waste its time on just so it can finish second. In the businesses I've grown, I've discovered that the best business you do is the business you don't do.

Avoid long-shot prospects, toxic clients and circumstances where you will finish second. That will give your company much more time and energy to spend on the chances worth taking.