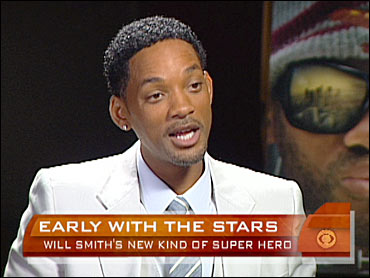 Will Smith is the undisputed king of the July 4 weekend movie blockbuster - and this year is no different.

In his latest film, "Hancock," Smith plays a superhero with a mysterious past and a bad attitude. The actor refers to the title role as a "bum superhero."

"He is rude. Mean to kids," he told Early Show co-anchor Harry Smith. "Like that was so bizarre and opposite to, you know, what my natural instincts (are). It actually was difficult for the first couple of weeks, but actually turned into one of those guilty pleasures."

Smith says that as an actor, he is always trying to find someone on whom he can model the character.

"When you look at a character, you are trying to find something in your life that you have some comprehension of," he said. "And the big superstar athlete was sort of the approach. Where, you know, someone is so talented and people expect so much from him that they are not allowed to really be human."

Actor Jason Bateman plays a public relations executive who decides he's going to give Hancock a makeover that includes a superhero costume.

"Hancock is fighting it all along the way," said Smith. "He doesn't like that, but we made one major adjustment from most superheroes. We put the underwear on the inside of the pants. Which, that's huge. That's ground-breaking. You know, it's like, you know, Americans, we're really used to our superheroes having the underwear on the outside. We broke genre."

The movies Smith has released over the July 4 weekend have been box office smashes. "Independence Day" in 1996, "Men In Black" in 1997, and "Men In Black II" in 2002 all grossed more than $50 million in their opening weekend, according to the Web site BoxOfficeMojo.com.

Smith doesn't take credit for being the reason his movies have done so well on Independence Day.

"It's funny because it's not - it's not about me, right, per se," he said. "Like I study the patterns of the universe. Things happen certain ways. So you line up the elements and then the universe does the work, okay? The 4th of July is the biggest American movie weekend and has been for 40 years. So you put a movie that has special effects. You make it funny and PG-13."

Sounds like a simple formula, but Smith admits there's one more factor.