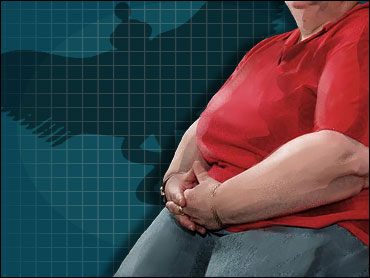 (CBS/AP) What makes some of us eat and eat and eat, even though we know we're killing ourselves?

Everyone and no one has the answer, it seems, but drug companies are scrambling for a cure.

This week dieters, doctors and investors will get their first extensive look at three new pharmaceutical prospects. Except that only one is really new - the other two are combinations of existing drugs.

The hope is that the new pills will deliver big weight loss without the risky side effects best epitomized by fen-phen, the combination drug pulled off the market in 1997 due to links to heart valve damage and lung problems.

Two of the drugs submitted for FDA approval - Qnexa and Contrave - seem quite effective, yet both have worrying side effects. The third, Lorcaserin, is safer but doesn't seem to cut the fat as well.

To be considered effective, the FDA says obesity drugs should reduce total body weight by at least five percent after one year.

Qnexa showed the best weight loss results in clinical trials, with patients losing between 13 and 15 percent of their body weight.

But the drug, a combination of amphetamine and an anticonvulsant, also had the highest rate of patient dropouts due to side effects - especially memory and concentration problems.

Contrave, also a combination of an antidepressant and an anticonvulsant drug, showed weight loss between 5 and 10 percent. Nausea was the main side effect.

Lorcaserin is behind door number three. It's a brand new drug that acts on serotonin, the brain chemical associated with feelings of well-being and satiation, according to the maker. Patients in company trials lost only five percent of their body weight. Still, they reported the fewest side effects - a major factor in getting FDA approval.

With U.S. obesity rates nearing 35 percent, expectations are high for the first new prescription drug therapies to emerge in more than a decade.

The FDA is expected to post its review of Vivus Inc.'s pill Qnexa on Monday and will hold a public meeting Thursday to review the data. Arena Pharmaceuticals Inc.'s lorcaserin is set for an FDA panel review in September, while Orexigen Therapeutics Inc.'s Contrave will be the subject of a December panel.