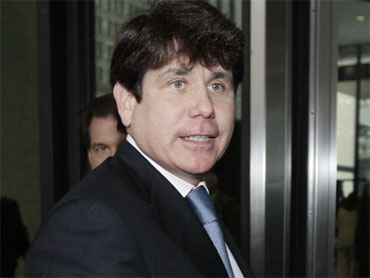 Former Illinois Gov. Rod Blagojevich may finally step into the witness box at his corruption trial Tuesday, but not before his brother and co-defendant emerges from a withering cross-examination in which he got combative and appealed to the judge for help.

Under repeated questions about whether he tried to use his brother's power as governor to pressure people into offering donations, Robert Blagojevich sounded indignant as he repeatedly denied it, and occasionally hit his folded hands against the jury box table as he responded, "No!"

Robert Blagojevich acknowledged that he sent the resume of a woman to the governor's chief of staff. But he says it wasn't a reward for her uncle's $10,000 campaign contribution.

Assistant U.S. Attorney Chris Niewoehner asked Robert Blagojevich if he realized that a contributor to his brother's campaign fund was looking for a state contract.

At one point, Robert Blagojevich plainly felt he was being cut off and appealed directly to Judge James Zagel. "There's context that's required here, Your Honor," he said. Zagel brushed off his appeal.

"You have a lawyer," Zagel said coolly. "He can ask the questions."

Robert Blagojevich said Monday that he had no part in alleged plans to trade Barack Obama's former Senate seat for campaign funds or a Cabinet post for his sibling. On Tuesday, he suggested that it was Obama who was reaching out for something by indicating his interest early in seeing his friend Valerie Jarrett get the seat.

"Obama was making the big ask and Rod was responding to the ask," Robert Blagojevich said, in denying his brother was out to gain personally. "Two politicians trying to work a political deal . ... That's what politicians do."

Rod Blagojevich, 53, has also pleaded not guilty to plotting to launch a racketeering operation in the governor's office. He has proclaimed his desire to take the stand loudly and often.

The former governor arrived for court Tuesday in his usual upbeat mood, holding hands with his wife, Patti. He smiled and waved to a large crowd of people. Someone in the crowd asked Blagojevich: "Are you going on?" But Blagojevich didn't answer as he walked by a cordon and entered the courtroom.

It is rare and risky for defendants in federal trials to testify in their own defense. Experts say Rod Blagojevich would need to abandon his usual cockiness, humble himself, and not allow himself to be goaded.

"Blagojevich needs to convince the people that he's just a blow hard, that he was just venting, that he had no illegal intent, that he wasn't taking money from anyone, and he was just conducting business like politics should be conducted," noted defense attorney Steven Greenberg told Bowers.

More would-be spectators than usual stood outside the courtroom waiting to get in, anticipating Blagojevich taking the stand. Around 60 people stood in the hallway by the doors, though only about 30 receive tickets each day.