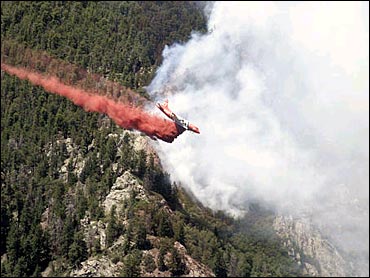 In Arizona, firefighters Monday widened a defensive ring around a mountaintop observatory in an effort to hold back two wildfires and protect a powerful telescope under construction.

The crews in southeastern Arizona used bulldozers and fire retardant around the Mount Graham International Observatory, which has two operating telescopes and the $120 million soon-to-be-completed Large Binocular Telescope. The ground crews were helped by an air tanker plane dropping retardant.

"The building's not going to burn, but the smoke and heat could do some real damage to the instruments inside," said Pruett Small, a fire official.

Researchers from around the world use the observatory, which is an extension of the University of Arizona. When fully operational in 2005, the Large Binocular Telescope will be the world's most technologically advanced optical telescope. It's expected to yield images nearly 10 times sharper than those from the Hubble Space Telescope.

The observatory, consisting of eight buildings, encompasses eight and a half acres of pine forest on Mount Graham's 10,470-foot Emerald Peak and is surrounded by a 200-foot-wide clearing. It also has a sprinkler system that officials said will be turned on if flames come within a quarter-mile.

One of the two threatening fires is a lightning-sparked blaze that had grown to more than 8,550 acres by Monday. It is burning less than a mile southeast of the $200 million-plus observatory.

"I can't hardly stand it to think there's a fire up there," said Verna Colvin, whose family owns a cabin in Turkey Flat. "It won't be the same if it burns up. It's like my life is going."

In central Arizona, the threat posed to the city of Payson by an 85,000-acre wildfire eased after crews reinforced their fire lines near the forest community. "The threat to Payson is basically minimal," U.S. Forest Service spokesman Jim Payne said. "We missed the bullet on this one."

In Alaska, an evacuation order remains in effect for 277 homes and businesses threatened by a blaze some 30 miles north of Fairbanks that had spread across 307,000 acres. The blaze began to die down somewhat Monday, with help from light rain and high humidity.

There are 62 active fires in Alaska. So far this year, wildfires have burned more than 1.8 million acres in the state.

In central Washington state, two fires near Lake Chelan have burned a total of nearly 5,500 acres. There were no reports of structure damage or serious injuries. Hundreds of firefighters were trying to make headway against the two fires before expected high winds later in the week. Helicopters scooped water from the Columbia River and Lake Chelan to drop on hot spots.