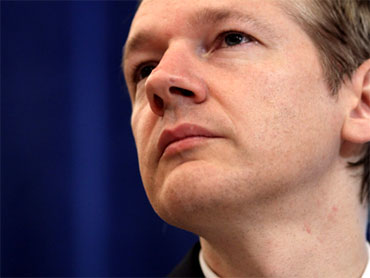 The ouster came after congressional staff questioned Amazon about its relationship with WikiLeaks, said Sen. Joe Lieberman, an independent from Connecticut.

WikiLeaks confirmed it hours after The Associated Press reported that Amazon's servers had stopped hosting WikiLeaks' site. The site was unavailable for several hours before it moved back to its previous Swedish host, Bahnhof AB.

WikiLeaks released a trove of sensitive diplomatic documents on Sunday. Just before the release, its website came under an Internet-based attack that made it unavailable for hours at a time.

WikiLeaks reacted by moving the website from computers in Sweden to those of Amazon Web Services. Amazon has vast banks of computers that can be rented on a self-service basis to meet surges in traffic.

But that move exposed WikiLeaks to legal and political pressure.

"WikiLeaks servers at Amazon ousted. Free speech the land of the free--fine our $ are now spent to employ people in Europe," the organization said Wednesday in a posting on the Twitter messaging service.

"If Amazon are so uncomfortable with the first amendment, they should get out of the business of selling books," WikiLeaks said in another tweet.

Seattle-based Amazon.com would not comment on its relationship with WikiLeaks.

"The company's decision to cut off WikiLeaks now is the right decision and should set the standard for other companies WikiLeaks is using to distribute its illegally seized material," Lieberman said in a statement. He added that he would have further questions for Amazon about the affair.

"Amazon can cut off Wikileaks from its servers, but as far as foreign governments are concerned, it is like closing the barn door after the horse is out," reports CBS News Foreign Affairs Analyst Pamela Falk, from the U.N., "and several of the diplomats whose leaders are mentioned in the leaks say that their host government has already downloaded the information."

"The main question you hear from foreign diplomats at the U.N. is what will the White House do in the future to keep their negotiations confidential," Falk said, "not what to do about this round of leaked documents."

As an organization, WikiLeaks has no firm geographic base, but founder Julian Assange sought to establish residency in Sweden to take advantage of laws protecting those who funnel information to the media. However, authorities rejected his application for a residency permit.

Swedish police are now seeking to arrest Australian-born Assange based on allegations of sexual assault stemming from his stay in the country. Assange has denied the charges.

Lost camera? Tips on how to reunite property with owner