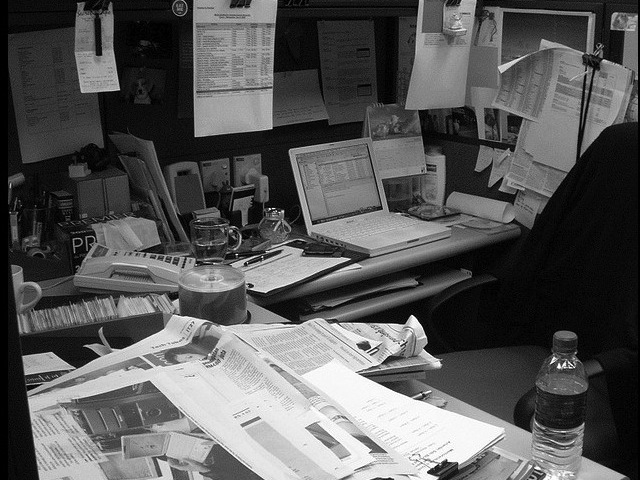 (MoneyWatch) COMMENTARY My office looks like the target of a drone attack. It always has. And you know what? It's a pretty accurate reflection of what's going on in my head. I am really, really disorganized. No kidding.

Throughout my career, bosses would tell me I needed to be more organized. Manage my thoughts better. Manage my time better. Guess what? They were all wrong. I didn't need to do anything different. I did okay just the way I was.

Had I listened to them, who knows what would have happened? I might have turned into a zombie drone like everyone else. I might never have done as well as I did. On the other hand, I might have done better. Who knows?

I once had a boss -- a VP in a midsized company -- plop down in my office and lecture me for an hour about all sorts of stuff. He didn't have one nice thing to say.

After a while, he looks around the place and says, "How can you work like this?" He makes an ugly face -- on top of the one he already had -- and continues, "It literally makes me ill to think about working in an office like this. No wonder you've got so many issues."

A year later, I left to become a VP at a much bigger company. Soon after that, my old boss got fired. Who's got issues now, I remember thinking.

Years later, I got some executive presentation training from a really talented consultant. She was incredibly patient, spent a lot of time teaching me to organize my thoughts, point of view, talking points, delivery, and all that. She succeeded in getting me to stop saying "ah" and "uh" all the time. I learned to pause for emphasis. That was great.

One day we watched a video of a speech I'd given at Beijing University. When it ended, I looked over at her, expecting a big smile and a hearty "Great job, Steve."

She just looked at me sideways, the way a dog does when you say something she doesn't understand. Then she sighed heavily and said, "You blew the close. You had them hanging on your every word. They would have remembered the last thing you said for the rest of their lives. And you forgot the close."

Oh, right. The close. How could I possibly be expected to have the presence of mind to remember the close after I've been talking to 500 captivated students for an hour? I was having so much fun, I was lucky to get one coherent message out there before I started telling stories and going off in 10 different directions.

You know, when I was a young manager at Texas Instruments, my cubicle was like Grand Central Station. There were always people coming and going, all sorts of ad-hoc meetings to troubleshoot problems and make tradeoffs. That's what electronic design was all about.

It got so bad that nobody wanted to work in the cubicles around me. It was like geek Mardi Gras five days a week. Nobody could work. When people complained to my boss, you know what he said? "Tough. That guy gets things done. That's all I care about."

The same is true for you. One person's way of getting things done is another person's nauseating mess. One size does not fit all. Don't let anyone tell you otherwise.