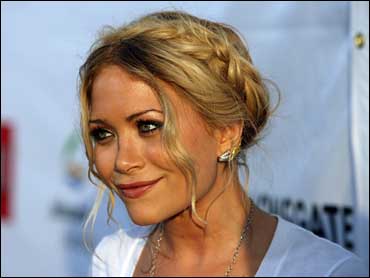 You see a tabloid shot of Mary-Kate Olsen and think, "Why does she look so depressed?" Well, there's a reason for that.

"I don't want my picture taken," the 21-year-old actress tells Entertainment Weekly magazine. "The only time I think it's OK is at a red-carpet event or a photo shoot.

"So every time I see paparazzi, I cover my face so they don't get a picture, and I'm just 'the mean person who doesn't smile.' "

Olsen, whose waiflike figure has made her a target of media scrutiny, avoids public displays of attention.

"I would love to be able to swim in the ocean in Malibu," she says. "But that is asking for a bikini shot. That's inviting something that I don't want to happen. I don't need to be on a 'Who's Skinny, Who's Fat, Who's Looking Healthy, Who's Not Eating?' list."

After a hiatus from acting, Olsen -- who rose to fame on TV's "Full House" in a shared role with twin sister Ashley -- will portray an alluring Christian girl on Showtime's "Weeds." Her 10-episode arc begins Sept. 17.

She also returns to the big screen in "The Wackness," co-starring Ben Kingsley. The film is slated for release next year.

"There's definitely been times in my life when I just turned to people and said, 'I'm done, this is too much for me, this is too overwhelming,' " Olsen says.

She's in a healthy frame of mind these days.

"Mentally, physically, I feel pretty on top of my game right now," Olsen says. "Talk to me next week, I don't know. Today, I feel good."

What to know about Charles, Britain's new king
Thanks for reading CBS NEWS.
Create your free account or log in
for more features.
View CBS News In
CBS News App Open
Chrome Safari Continue
Be the first to know
Get browser notifications for breaking news, live events, and exclusive reporting.