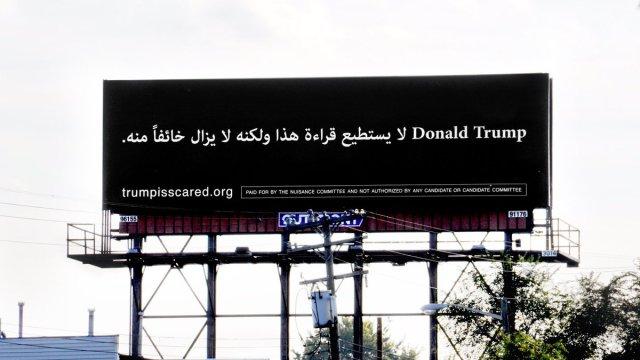 Drivers on I-94 in Dearborn, Michigan may be either amused, angered or baffled by the sight of a new billboard along the highway.

That’s because the sign is written almost entirely in Arabic, with the only words in English being “Donald Trump.”

CBS Detroit reports that the billboard was funded by a super PAC called “Nuisance Committee,” whose spokeswoman, Melissa Harris, chatted with WWJ Newsradio 950 about the sign.

“We intentionally did not put the translation on the board,” Harris explained, “because I like the idea of people who do not speak Arabic have to ask their friends who do speak Arabic for them to translate the board for them.”

So what does the sign say? The translation: “Donald Trump doesn’t know what this means, but he’s scared of it anyway.”

Dearborn is home to one of the largest Arab-American populations in the U.S., and the super PAC wants to motivate them to make their voices heard on Election Day.

“The primary purpose is to turn out the vote; and I think the secondary purpose is to have a conversation about Donald Trump’s positions on immigration,” Harris said, including his controversial call to ban Muslims or subject them to “extreme vetting.”

Despite “trolling” claims from some on Twitter, Harris says that wasn’t the intent.

“We’re not name-calling, we’re not insulting… We’re simply pointing out that his fear, Donald Trump’s fear of Muslims and of immigrants, is wholly irrational,” she told the station. “It is not based in fact; and we hope this exposes, you know, what we feel is the true motivation behind his hateful rhetoric, which is fear — irrational fear.”