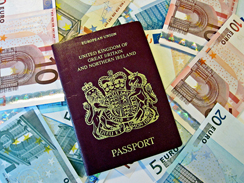 (MoneyWatch) There's an approach to investing called the "carry-trade" strategy that, in theory, shouldn't work. Yet there are profits to be had, and a recent paper tries to shed some light on why this seeming anomaly is working.

The carry-trade strategy involves borrowing, or shorting, a currency with a relatively low interest rate and using the proceeds to purchase, or go long, a currency yielding a higher interest rate. Once you unwind the trade, you pocket the difference. The strategy can be "enhanced" though the use of leverage.

Uncovered interest parity (UIP) theory states that expected returns should be equal on otherwise comparable financial assets denominated in different currencies. Thus, we should expect the low-yielding currency to appreciate by the same amount as the return differential. However, there's overwhelming empirical evidence against the UIP theory.

The authors of the 2011 paper, "Properties of Foreign Exchange Risk Premiums," sought to provide the answer to the UIP puzzle and thereby provide an economic rationale for the existence of the carry trade. They studied six major foreign exchange markets over a 20-year period. The following is a summary of their findings:

The authors concluded that "foreign exchange risk premiums are driven by global risk perception and macroeconomic variables in a way that is consistent with economic intuition." These findings are consistent with the findings of other research on the carry trade, adding to the body of research demonstrating the reasons for the both the existence of the carry trade and its success.