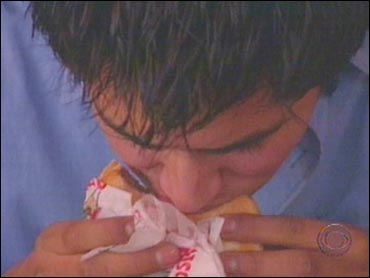 Why do we eat when we're not hungry?

"We are a nation of mindless eaters," says Professor Brian Wansink. Wansink is taking a scientific approach to that question. His lab at Cornell University often looks more like a restaurant, CBS News medical correspondent Dr. Jon LaPook reports.

His theory is this: We eat with our eyes more than our stomachs.

"All of these cues around us are suggesting how much to eat and what to eat. At the end of the day we have been essentially directed by these cues and not necessarily by our own thoughtfulness," Wansink says.

In one test, subjects think they are trying a new kind of pasta. They fill their plates, but after a mishap, they serve themselves again. They don't know it, but this time they are given a slightly larger plate.

"We've done this time and time again and people tend to serve themselves 25 percent more in the bigger plate," Wansink says.

Wansink estimates we make over 200 food choices every day. Most of them are influenced by factors we don't even notice, like the size of the serving dish or the distance back to the kitchen for a refill. In one experiment, he found that just adding food coloring to every tenth Pringle — to suggest a portion — cuts potato chip intake in half.

"Coloring every 10th Pringle will lower intake from 24 to about 12," Wansink says.

In real life — where nobody is coloring our Pringles — this research translates to dishing out set amounts of food rather than eating from a large box.

He also advises limiting variety as a way to eat less, especially at those all-you-can-eat buffets.

And who you sit by can be as important as what you eat.

"One way you can do is just change the pacing key in on the person who is starting last," Wansink says. "Pace yourself with the slowest eater. Wait until the last person at the table begins eating."

People think willpower the key to conquering mindless eating. Wansink's research concludes self-control is only part of the puzzle.

"The biggest mistake people make is to think that they are the master and commander of all of their food decisions and not realize that a lot of what's tricking them are the barriers and the traps they set up for themselves," Wansick says.

You can read more about the study and Mindless Eating here.