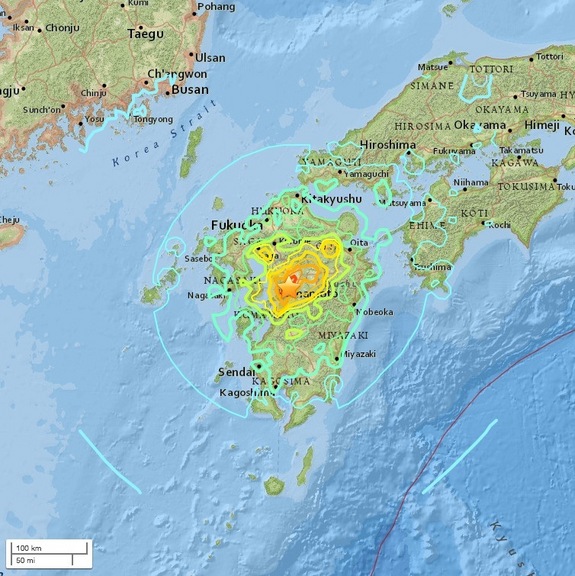 With residents of the Kumamoto region reeling from two sizable earthquakes in as many days, and with memories of the massive 9.0-magnitude earthquake and tsunami that devastated Tohoku, Japan, in 2011 not far from people's minds, what is it about this part of the world that makes it so seismically active? [The 10 Biggest Earthquakes in History]

For starters, Japan is located along the so-called Pacific Ring of Fire, which is the most active earthquake belt in the world. This "ring" is actually an imaginary horseshoe-shaped zone that follows the rim of the Pacific Ocean, where many of the world's earthquakes and volcanic eruptions occur.

Within the Ring of Fire, several tectonic plates -- including the Pacific Plate beneath the Pacific Ocean and the Philippine Sea Plate -- mash and collide.

"The Earth's surface is broken up into about a dozen or so major chunks that are all moving around. Where they all interact at their edges, interesting things happen," said Douglas Given, a geophysicist with the USGS in Pasadena, California.

The latest earthquake seems to have been caused by the Philippines Sea Plate diving underneath the Eurasia Plate, according to Paul Caruso, a geophysicist with the USGS.

While Japan is no stranger to earthquakes, the 7.0-magnitude temblor is one of the largest ever recorded in this part of southern Japan, Caruso told Live Science.

"The second-largest was probably on March 20, 1939 -- there was a magnitude-6.7 in this area. And we've had magnitude-6.5 and magnitude-6.3 earthquakes, but this is the largest quake that has been measured in that vicinity," he said.

A tsunami advisory was issued after today's earthquake, but it was subsequently lifted by the Japan Meteorological Agency, and there are currently no major tsunami warnings or advisories in effect.

"We have quakes around Fiji all the time, but those are sometimes 400 miles underground, so they aren't going to generate a tsunami," he said.

Saturday's earthquake was shallow -- about 6 miles underground -- but the epicenter was on land, meaning there aren't likely to be any dangerous tsunamis as a result, Caruso said.

Japanese authorities and scientists at the USGS will be monitoring the area for potentially dangerous aftershocks, which are smaller quakes that follow the largest event in a series and that generally decrease in strength.

"This seems to be a pretty energetic sequence, and there are lots of large aftershocks," Given told Live Science. "And of course, after a large earthquake, structures are often weakened as a result. Additional damage can be expected."

Residents of the area should expect more shaking in the coming days, according to Caruso.

"We can say for certain that there are going to be more aftershocks in this area," he said. "Exactly when and how big they're going to be is difficult to say, though. No one can predict that."

The sun as you've never seen it