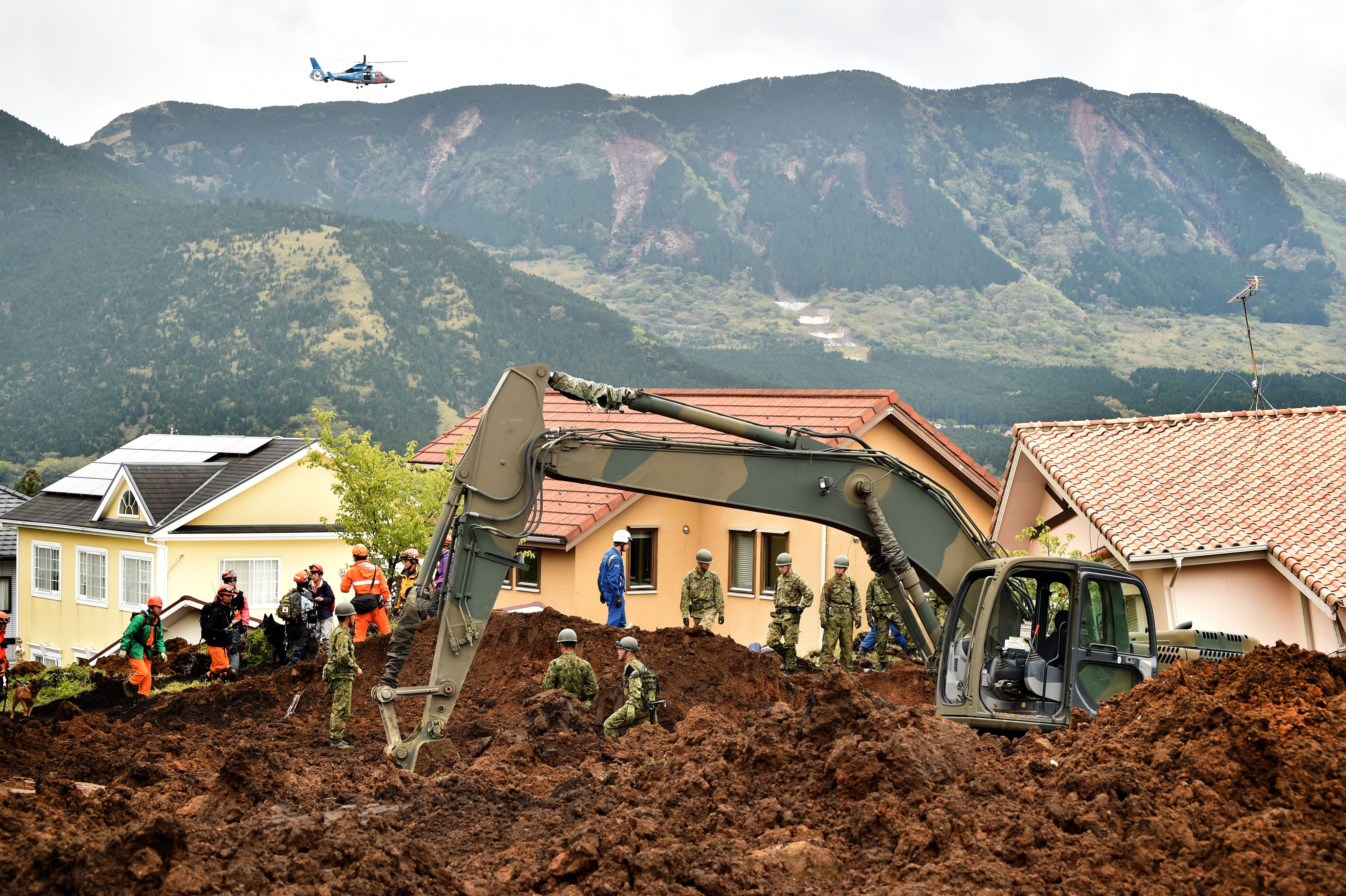 Authorities said at least 42 people had died and nearly 1,100 were injured in the two quakes that hit the region near Kumamoto city late Thursday and early Sunday.

Rescuers were redoubling search efforts on the southern island of Kyushu, where many areas were cut off by landslides and road and bridge damage. Forecasts for heavy rains, which would make land and collapsed buildings even more unstable, added to the urgency.

A U.S. Army UC-35 aircraft landed Monday at a Japanese military base near Kumamoto. Nine people died in the first, magnitude 6.4 earthquake, and 33 in the second quake, which registered 7.1, revised from an initial reading of 7.3.

"There are still missing people, so with the help of the U.S. forces, we would like for the operations to go into effect as quickly and smoothly as possible," said Col. Masahiro Sugawara of the Joint Staff Council of Japan's self-defense force.

The U.S. side, whose Air Force, Navy and Marine bases are home to about 50,000 troops in Japan, was to provide aerial support from other regions the effort to feed and care for tens of thousands of people seeking shelter. The American military played a large role in rescue and relief during the March 2011 tsunami and earthquake disasters in northeastern Japan.

This time, Japan asked for help with airlifts into the area, said Jacqueline Hearne, a public affairs officer for the U.S. Army. "We're glad that we're able to support in any way the Japanese government needs us."

The disruptions caused by damage to buildings and roads, and by stoppages of electricity and water supplies, were reverberating beyond Kyushu as manufacturers suspended output and transport links were snarled.

Toyota Motor Corp. said it would shut down most of its vehicle production in Japan over the course of this week because of parts shortages stemming from the earthquakes. Nissan Motor Corp. and Honda Motor Co. also halted production at some facilities.

Japan's Nikkei stock average fell 3.4 percent to 16,270.89, though for various reasons, including a surge in the value of the yen after weekend talks amid major oil producers on freezing oil output ended without an agreement.

Prime Minister Shinzo Abe defended his government's handling of the crisis, as some of the 180,000 evacuees complained of having only rice balls and bread to eat.

"We are doing our best," Abe told lawmakers when challenged by the opposition over the government's handling of the relief effort. "We are striving to improve living conditions for the people who have sought refuge."

Many whose homes were not seriously damaged sought shelter as the area was rocked by more than 500 aftershocks.

"Without water and electricity, we can't do anything. Without the TV on, we can't even get information about disaster relief operations," said Megumi Kudo, 51, standing in a line for water outside a community center in Aso city. "We can't take a bath, not even a shower."

His house was intact despite major roof damage, but like many, the family was sleeping in their cars.

Japanese media said most of those missing were in Minamiaso, a mountain village southwest of 5,223-foot Mount Aso, the largest active volcano in Japan. There, dozens of troops, police and other rescue workers were shoveling debris and searching through places where they may have been buried.

A few stretchers were on hand in case anyone was found alive.