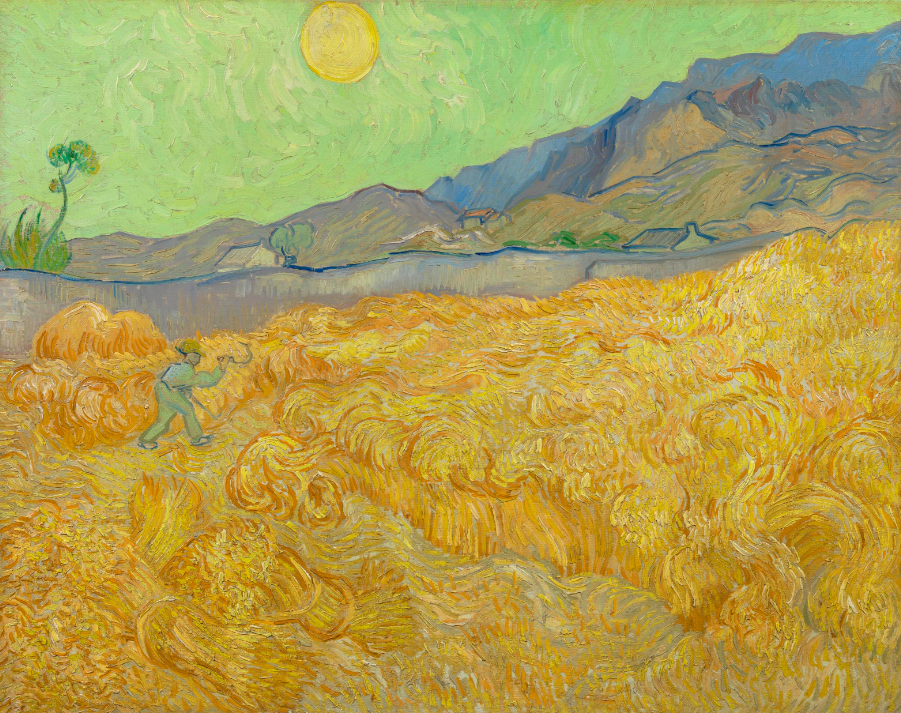 It’s difficult to reconcile the beautiful paintings Vincent van Gogh made while living in Southern France with his act of self-inflicted violence there -- when he sliced off his own ear with a razor.

A new book by van Gogh scholar Martin Bailey explores the 15 months the Dutch-born painter lived and worked in Provence -- he painted prolifically, about 200 works -- and the events surrounding the mutilation of his ear as well as his mental health.

“Studio of the South: Van Gogh in Provence” (published by Frances Lincoln, Nov. 3, 2016) dedicates a full chapter to the ear-cutting incident, presenting a new theory on why one of the most beloved artists of all time would inflict so much pain upon himself.

Van Gogh moved to a butter-colored house in Arles, France -- captured in his painting “The Yellow House” -- in May 1888. Only seven months later, the famous ear incident took place.

Many attribute the tragic day to a fight with the painter Paul Gauguin and the stress that had built up between the two -- they’d been rooming together in the yellow house and painting side-by-side for months.

“In the case of Gauguin, Gauguin came to Arles two months before the ear incident and they lived together in the yellow house and initially they found it an exciting collaboration and exchange of ideas and techniques. It was great for both, but tensions did develop towards the end of the stay,” Bailey told CBS News.

However, Bailey believes it was news of his beloved younger brother Theo’s engagement that provoked van Gogh’s actions.

“The trigger for the self-mutilation has largely been overlooked,” he said, explaining that his research suggests that a few hours before van Gogh cut off his ear (the extent of the ear injury is still debated) that he received a letter explaining that Theo had asked a young Dutch woman named Jo Bonger to marry him.

“Two things: Vincent was financially dependent on his brother for an allowance and without that he could not have worked as an artist. And he had problems with his family, but the one person he was close to was Theo,” said Bailey, who is also an art correspondent from London and an independent curator who has mounted van Gogh exhibitions in Europe.

“It seems to me Vincent had a fear of being abandoned by his brother and that’s what drove him to it,” said Bailey.

Van Gogh’s mental health has long been a subject of discussion among scholars and others. Physicians and art historians from around the world gathered in Amsterdam in September to talk about van Gogh’s diagnosis at a meeting sponsored by the Van Gogh Museum there. The museum held an exhibition “On the Verge of Insanity” at the same time.

The experts concluded that van Gogh had his first significant psychotic breakdown while in Arles, and he was subsequently hospitalized for the first time for mental instability.

Arko Oderwald, a lecturer in philosophy and medical ethics at the Vrije University Medical Center in Amsterdam, who attended the September meeting, told CBS News that he had not read Bailey’s book yet, but he disagrees with the new theory.

“Based on my knowledge of the facts that are available, I don’t think the marriage of Theo plays an important role in the stress of van Gogh. It may seem likely from an outsider’s point of view, but there is no conclusive evidence to support this theory. Since I have been involved in the question of van Gogh’s disease, I found out there is a lot of speculation about van Gogh. I am afraid this is one of those speculations,” said Oderwald.

Others say it’s possible a combination of physical and psychological issues were involved, including the news of Theo’s engagement.

Werner Strik, a professor of psychiatry and director of the University Hospital of Psychiatry in Bern, Switzerland, told CBS News that the meeting in Amsterdam helped experts construct a comprehensive picture about the mental health of the artist.

“There are innumerable and contradictory inferences about Vincent’s character and mental illness. Most of them are based on single events or on a selective lecture of his biography,” Strik said.

“Vincent may have had a ‘difficult’ character, with contentiousness, very determined ideas about his artistic project,” Strik said, noting that he had periods of religious fanaticism, too.

The traits that may have been dysfunctional when it came to his social relationships may also have been qualities that made him so unique as an artist, Strik explained.

Experts at the September meeting concluded that no mental disorder could be diagnosed before December 1888, when the ear incident happened. But after that, four more episodes of mental illness were identified between 1888 and 1890.

“They were characterized as acute and transient, but clearly psychotic symptoms: abrupt onset, rapidly changing mood, hallucinations, confusion and extreme psychotic anxiety. The episodes were followed by full remission, full insight in the pathological nature of the episodes, and a profound worry to relapse,” Strik said.

Substance abuse, epilepsy (which van Gogh had been diagnosed with, according to Bailey’s book) and many other organic disorders also could have triggered psychosis, Strik said, adding that it’s possible psychological triggers – such as the relationship with Gauguin in Arles, or the news of Theo’s marriage – could have fed into his actions, too.

It is also possible for some people to experience brief psychotic episodes without any diagnosable cause, according to the DSM-5, the handbook used by health care professionals around the world to diagnosis mental health disorders. Strik noted that some of the experts at the meeting suggested those brief episodes could be related to atypical bipolar disorders.

“Vincent was aware about his illness and extremely scared about it. His suicide may have occurred when he anticipated a further relapse in the summer of 1890,” Strik said.

Van Gogh’s medical records also note that the artist was “prey to aural hallucinations” and heard voices, and Bailey suggests in the book that perhaps he was vainly attempting to silence those voices by severing his ear.

In 1890, van Gogh shot himself in the wheat fields above Auvers-sur-Oise, France, and died soon after.

In the end, said Bailey, no one may ever really know for sure what lay behind the gifted artist’s “unusual act of self-mutilation, but it may well have been a desperate plea for help.”

Ultimately, separating van Gogh’s life from his art is difficult to do, he concluded.

“Both are so closely intertwined,” Bailey said. “It is the art which has lasting importance and which is the primary focus of this book, but an understanding of the personal challenges he faced lends an added dimension to his achievements.”

Texas resident gets over $4,000 in bills after COVID test
Mary Brophy Marcus