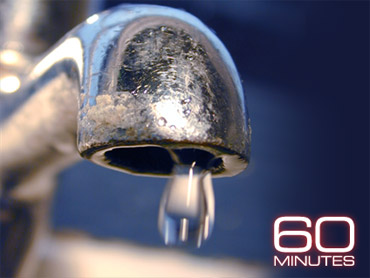 Water is in short supply. You don't have to go to Africa or the Middle East to see how much the planet is running dry. Just go to California, where, after three years of drought, dozens of towns and cities have imposed mandatory water rationing and a half million acres in the country's agricultural breadbasket are lying fallow.

Arnold Schwarzenegger, the action hero governor, has thrust himself into the fray by requiring towns and cities across the state to reduce their water use by 20 percent over ten years. That means less water to drink, to bathe in, and to water the lawn.

Governor Schwarzenegger only has a year left in office, and he's well aware of the old saying "Whisky is for drinking, water is for fighting."

"People have died over water. You know, movies have been made about the wars of water in California," Gov. Schwarzenegger told 60 Minutes correspondent Lesley Stahl.

"Exactly," Schwarzenegger replied. "So water has been one of those issues."

It's one of those issues that is pitting Californians against each other for every last drop.

Schwarzenegger says his state is in crisis. "We've been in crisis for quite some time because we're now 38 million people and not anymore 18 million people like we were in the late 60s. So it developed into a battle between environmentalists and farmers and between the south and the north and between rural and urban. And everyone has been fighting for the last four decades about water."

He took us to the San Luis Reservoir in California's farm country.

"Everything that you see here was all full of water," he told Stahl.

He showed us how desperate things are: the drought that has affected the western part of the country has left its mark there - water levels are only half what they should be. It's like a bathtub ring, showing the previous water level.

"It's a disastrous situation and we got to do something about that very quickly," he told Stahl.

The reservoir is a key part of the water system that has kept southern California - and one of the most productive agricultural basins in the world - green and arable, until now.

"It looks like sand. It looks like a desert, actually," Stahl remarked, while talking with Todd Allen, a wheat, cotton and cantaloupe farmer in California's Central Valley.

"This right here is 150 acres, and there hasn't been anything planted on it," Allen pointed out.

"This is all fallow out here?" Stahl asked.

"Yes," Allen replied. "Nothing has been grown on this, this year."

And because of that, his bank cut off his line of credit.

"You know, I've got a wife and kids," he said. "The thought of bankruptcy is something…I don't think I could deal with that."

But he doesn't blame his troubles on the drought. He blames the environmentalists who sued under the Endangered Species Act to protect a tiny little fish, the Delta smelt, that was being killed off by California's main water pumps.

A federal judge ordered that the pumps be turned down, and Allen's taps almost ran dry.

"When you can put the needs of a two-inch fish above me and my family and that thing could potentially bankrupt me, I got a serious problem with that," Allen told Stahl.

"Here's the way I've heard it described: fish versus farms," she remarked.

"Well I would say I'm at the bottom of the food chain. I even told Schwarzenegger to put all of us farmers out here on the California Endangered Species Act. Because that's what I feel. I feel like I'm being punished, and I haven't done a darn thing wrong," Allen said.

They and Schwarzenegger want the federal government to find a way to undo the judge's order that has been reducing the water flow to save the fish.

Asked if he thinks they should just let the smelt go extinct, Schwarzenegger said, "No. …I think there is a better way of going."

He doesn't want to tarnish his environmental credentials - he's known as "the green governor." So he's trying to have it both ways.

"Save the smelt?" she asked.

"It's just you got to recognize that it is a very, very complicated issue," Schwarzenegger replied.

Stahl spoke to Jeffrey Mount, founder of the Center for Watershed Sciences at the University of California, Davis. He says the smelt were once "incredibly abundant," but that very few of them are left."

Mount says that three quarters of the water shortages are caused by the drought, not the fish, and he has a message for the farmers: "Don't plant crops that have to have water every year. So some of the mistakes that farmers are making in that system is they're planting crops that can't be sustained in periods of severe drought. And Lesley, if there's one takeaway to have here, is the future for California is going to be dealing with scarcity. We have to adapt to basically chronic scarcity."

He does admit that the timing of the judge's order, in the midst of the drought, has made things worse.

"I mean, of all times to come along and try to save a little fish that big. People don't understand. They don't get it," Stahl remarked.

"Well, I wish they would ask beyond the little fish, because the little fish is essentially your bellwether. It's telling you, you have an ecosystem which is in dramatic decline," Mount said.

He points to the state's salmon population, which is so low that commercial fishing has been shut down for two years.

Asked what has gone wrong, Mount told Stahl, "We can't do it sustainably. You cannot currently meet the demand. Nowhere else on the planet can you point to a place which relies, for their water supply system, on an estuary."

An immense estuary, the Sacramento-San Joaquin Delta is where the state's main rivers meet the sea. The best way to get a sense of how vast it is is from the sky.

"This is it. This is the delta," Schwarzenegger told Stahl during an aerial tour of the estuary.

"The home of the famous Delta smelt that all the controversy seems to have bubbled up over," she remarked.

"Well it's the home of the smelt and all kinds of other species that people have been fighting over. And it's all happening right in this area," Schwarzenegger explained.

Stahl and the governor flew over what is the hub of California's water system, over a web of channels and islands through which river water flows from the north and is pumped into a highway of aqueducts and on to the $25-billion crop industry and to cities like Los Angeles.

"The delta was never meant to take this water through," Schwarzenegger said.

This water system through the delta, with its series of dams and reservoirs, is as big of a problem as is water scarcity. The system hasn't been expanded since the 1960s. Hard to believe, it is held together by 1,100 miles of crumbling levees and it sits next to five major earthquake fault lines.

"It's brittle and its fragile and it kind of teeters on the edge of failure," Jeffrey Mount told Stahl.

He showed us a computer simulation of how catastrophic it would be if the levees broke.

"So blue means drinkable water, orange is completely salty water. It literally pulls water out of San Francisco Bay, brings the salt all the way to the south delta here where the pumps are and by now you've shut off the water supply to 25 million people," Mount explained.

The simulation is based on what happens during an earthquake, but the levees are in such bad shape they've been collapsing on their own. The last major failure was on a sunny day in 2004.

"Anybody listening to you is thinking Katrina. They're thinking New Orleans…," Stahl remarked.

"This is our Katrina," Mount said. "And any rational look at it says, 'That's not acceptable.'"

Schwarzenegger has made fixing the delta a high priority and last month got sweeping water legislation passed, including an $11 billion bond for next fall's ballot that would pay for new dams to increase the state's ability to store water.

The governor also wants to build a canal that would re-route water around the delta to save the estuary and expedite the flow south. The canal will cost billions more.

"Look at the economic crisis that we're facing right now. Your state alone is facing a $21 billion deficit. It's said the canal alone will be a bigger project than the Panama Canal. I mean, this is going to be huge," Stahl said.

"Some people make it sound bigger. And they put numbers on it which is not the case. But the whole thing is, without any doubt if you put it all together, it's a $40-billion plus project," Schwarzenegger said.

"Well, you're going to go to the public here in California. This could fizzle, couldn't it, if they don't pass it?" Stahl asked. "I know you don't want to be pessimistic."

But time is running out for farmers like Stuart Woolf, who runs his family's big almond and tomato business.

He told Stahl he has to tear down the trees because of the water problem.

Once felled, they're fed into what is known as a tub grinder. "It can grind about five mature almond trees in a minute. And these trees, a tree of this size would normally take about 20 years to grow. And within 20 seconds, sawdust," Woolf explained.

What is happening is going to have an impact, he says, because half the country's fruits and nuts come from this area.

"We will find higher food prices, maybe less selection from California. But these crops may very well come from other regions of the world," Woolf said.

"But so far the average consumer in California and all across the country, we haven't felt it," Stahl remarked.

"No. I don't think we've felt this impact yet. But it will come," he predicted.

Where the impact is already felt is in the farm communities where unemployment has reached as high as 40 percent. Farm hands who used to work in the nation's breadbasket are now standing in breadlines. Some of the vegetables have been sent from, of all places, China.

"There are people who say the southern part of the state is thirsty. They say that some of these farms should just go out of business. That they take too much water, and people need that water," Stahl told Schwarzenegger.

"Yes. You know. Of course, I totally understand that. But I look at the overall picture again. I tell you I want it all. I love our farms," the governor replied.

He told Stahl it is realistic. "Anything is realistic. It doesn't mean because it's a desert that we cannot go and bring water in here and start growing things. All we have to do is deliver water and then we can grow anything we want."

So much for the idea that the state is entering an age of scarcity.

Schwarzenegger, who first became famous for pumping iron, wants to be remembered for pumping water back into California.

Asked why he decided to take on this issue, Schwarzenegger said, "It's easy to just push things off and I don't like the idea of kicking the can down the alley."

"You could have so easily done that?" Stahl asked.

"Yes, but I mean I like, remember, I come from the sports background where you kind of welcome resistance you welcome kind of you know, torture sometimes," he replied. "And all of those kind of things, you know, because that's the only way you get to be a champion."

Students, parents from five Chicago schools will get college for free
Thanks for reading CBS NEWS.
Create your free account or log in
for more features.
View CBS News In
CBS News App Open
Chrome Safari Continue
Be the first to know
Get browser notifications for breaking news, live events, and exclusive reporting.