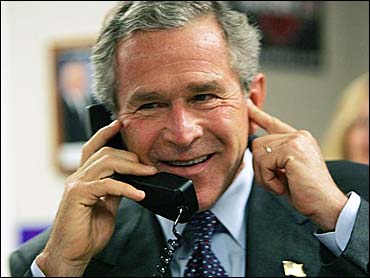 Going into the 2004 presidential election, two major issues posed potential threats to President Bush's prospects for re-election: the economy and the Iraq war.

CBS News Exit poll results suggest that these issues were not the clear-cut silver bullet the Kerry campaign had hoped they would be. Instead, their effectiveness has been countered to a large degree by two issues emphasized by the Bush campaign: terrorism and moral values. [CBS News National Exit Poll results are based on interviews with 13,531 voters. The sampling error is plus or minus 1 point.]

In the 2000 election, only 13 percent of voters leaving the polls said that the nation's economy was not good or poor. In 2004, more than half of voters (52 percent) rated the economy not good or poor, giving the Kerry campaign an important opening.

In addition, Mr. Bush's decision in March 2003 to go to war in Iraq placed on the public agenda a brand new issue that had not even been on the radar screen in 2000. Though initial public support for the war was relatively broad, the continued resilience of the insurgency has led to increasing public disenchantment.

To counter the Kerry campaign's expected focus on these two issues, the Bush campaign's strategy was twofold. The primary goal for Mr. Bush was to emphasize another major new issue arising from the events of 9/11—the issue of the war on terrorism. Specifically, the Bush campaign sought to convince the public that unlike Sen. Kerry, Mr. Bush possessed the personal qualities of strength and decisiveness necessary to fight the war on terrorism.

A secondary strategy of the Bush campaign was to suggest that Mr. Bush felt more strongly than Kerry about traditional moral values issues. In particular, Mr. Bush was the only candidate to support a constitutional amendment to ban gay marriage.

CBS News Exit Poll results suggest that the Bush campaign strategy was relatively effective in blunting the potential damage of the issues of the economy and Iraq.

One candidate characteristic on which voters clearly favored Kerry was the ability to bring needed change. Among the 25 percent of voters who selected this as the most important candidate quality, Kerry led 95 percent to 5 percent.

Though the result of the 2004 election may be very similar to that of the 2000 election, this does not mean that the 2004 election was merely a repeat of what occurred four years ago. Using the issues of the economy and Iraq, candidate Kerry was indeed able to make inroads among many voters. However, the Bush strategy of focusing on terrorism and moral values was effective in picking up additional support to help offset gains made by Kerry. As a result, Mr. Bush managed to stay competitive and succeed in his quest for reelection to the presidency.

David R. Jones is associate professor of political science at Baruch College, City University of New York. He the author of a book and several scholarly articles on American politics and voting behavior. He holds a Ph.D. from the University of California, Los Angeles.
View CBS News In
CBS News App Open
Chrome Safari Continue
Be the first to know
Get browser notifications for breaking news, live events, and exclusive reporting.