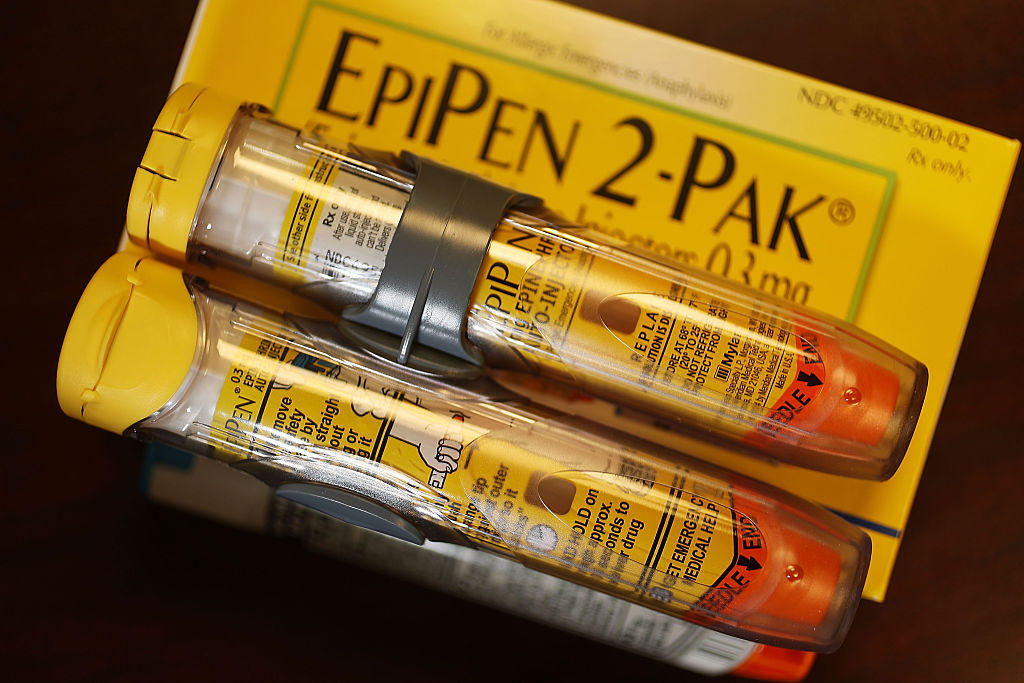 SAN FRANCISCO — It has been available for years, it’s a fraction of the cost and doctors say it is as safe and effective as the brand name EpiPen device. So why aren’t they prescribing the generic version of the lifesaving epinephrine injector? Marketing and semantics may be to blame, CBS San Francisco consumer-investigative reporter Julie Watts reported.

“Every 6 minutes, life-threatening food allergies send someone to the hospital,” warns the narrator of a dramatic new EpiPen commercial. The Mylan ad features a young teen at a party who is breaking out in hives and gasping for air after eating a peanut butter brownie.

It is one of several EpiPen commercials intended to raise awareness about the life-saving emergency epinephrine injector that is commonly prescribed to treat anaphylactic shock.

“I see some commercials about carrying an EpiPen and it’s kinda scary because that could potentially happen to me,” explained 10-year-old Marcus Espiritu who is allergic to tree nuts and peanuts.

Marcus is among the estimated one in 13 children with food allergies, two in every class. Many of those children are just one bite away from a potentially deadly allergic reaction. But thanks in part to EpiPen’s marketing, kids like Marcus know the EpiPen could save their life.

Which is why Marcus’ mom, Mary, said she was so frustrated when she heard that the price of the drug had increased nearly 500 percent.

“Some parents have said, ‘I’m even looking at keeping an expired EpiPen,’” Mary said, acknowledging the extreme financial burden for some in the allergy community.

Many believe that Mylan’s EpiPen is the only option. It’s not.

A generic epinephrine auto-injector has been on the market since 2013. A pharmacy survey by CBS San Francisco found that the cash price for the generic device is as much as $430 cheaper than the EpiPen.

The generic auto-injector is FDA approved for the same use as the EpiPen, contains the exact same medicine. Pharmacists and doctors say it’s as safe and effective as the EpiPen brand. So why aren’t they prescribing it?

“It’s like Kleenex,” said Dr. Ronn Berrol, Medical Director of the Alta Bates Summit Medical Center Emergency Department in Oakland. “We don’t say facial tissue. When I think of an epinephrine auto-injector, the first word that comes to mind is EpiPen.”

Berrol noted that Mylan has done an exceptional job promoting the EpiPen. The company reportedly spends $85 million a year on marketing and has contracts with schools across the country. So when it comes time to prescribe an epinephrine auto-injector, Berrol explained that the term EpiPen is top of mind, it is easy to write and he said few realized the device had become so expensive.

“When the story broke we were kind of shocked and appalled, and even though we were complicit in it, we didn’t realize that at all.”

Berrol said that there may also be confusion over how doctors must write the prescription for the cheaper generic.

“There are many providers who think ‘I’ll write EpiPen or generic equivalent’ not realizing that the pharmacist can’t substitute it,” he said. Even though the medication is the same, the generic epinephrine auto-injector is technically the authorized generic for a different brand, Adrenaclick.

If the word EpiPen appears on the prescription, “legally we would have to fill it as an EpiPen unless we call a prescriber to change it,” said Dr. Mohamad Jalloh of the American Pharmacists Association. “There isn’t an equivalent for the EpiPen device specifically.”

Impax, the company that manufacturers the generic, pointed to laws in several states that may enable the pharmacist to substitute the Adrenaclick generic for the EpiPen without calling the doctor. However, most major pharmacy chains told KPIX 5 that their pharmacists would still call the doctor before substituting a prescription.

Some also acknowledged that they don’t  stock the generic epinephrine injector because it’s so rarely prescribed. However, they said a pharmacist can order it when requested by a doctor.

Both Jalloh and Berrol said they are confident that the generic epinephrine auto-injector is as safe and effective as the EpiPen brand. However they both note, as with any medical device, it is crucial that patients know how to use it.

There are a few minor differences between the EpiPen Auto-Injector and the generic epinephrine auto-injector. The EpiPen has one cap to remove before use, the generic has two. After the EpiPen is injected the needle automatically retracts, the generic’s does not.

However, the most significant difference is how long you must hold the injection. In May of this year, the FDA changed its EpiPen injection instructions to reduce the amount of time you have to hold the injection from 10 seconds to 3 seconds. The generic auto-injector must be held for 10 seconds.

Impax offers a free injection trainer that can be ordered from its website and medical experts highly advise that, like with the EpiPen, anyone who might use the device should practice with the trainer.

Food Allergy Research & Education – or FARE – believes that anyone with an allergy should have affordable access to the lifesaving medication.

According to FARE CEO Dr. James Baker, many did not realize how expensive the EpiPen prescriptions had become until the introduction of the Affordable Care Act. Before high deductible Obamacare plans, most simply paid the brand-name co-pay when they refilled their prescriptions. However, now that many must first meet high out-of-pocket deductibles before their co-pays kick in, they’re being forced to pay cash for their EpiPen refills.

Baker believes competition is the key to keep prices down.

“The FDA has shown that if you have three or four drugs in the marketplace you’re likely to have a more competitive market,” Baker said.

In the wake of the high profile EpiPen price hike, competition appears to be growing.

In addition to the authorized Adreniclick epinephrine auto-injector that is currently on the market, Mylan announced it’s working on authorized EpiPen generic. Auvi-q has also announced that it is bringing back its auto-injector after voluntarily recalling the product last year due to dosing concerns.

Surprises at the Pharmacy

When Mary recently refilled Marcus’ prescription she was surprised to find that the pharmacist automatically substituted the generic for his EpiPen.

She discovered that his doctor wrote “epinephrine auto-injector” instead of EpiPen on the prescription, which allowed her pharmacist to provide the cheapest alternative.

“I was kinda surprised the pharmacy didn’t tell us about it and they also didn’t tell us there’s a difference in how it works and is administered,” she said.

She admitted that she had reservations at first, but after researching online and speaking with her doctor, she said she’s confident it’s as safe and effective as the EpiPen brand.

Now Mary said it’s her turn to raise awareness. “I will be following up with the school saying, just so you know, we have this generic version, it does work differently. “

Note: Prices for both the EpiPen and generic vary from pharmacy to pharmacy. Both also offer coupons.