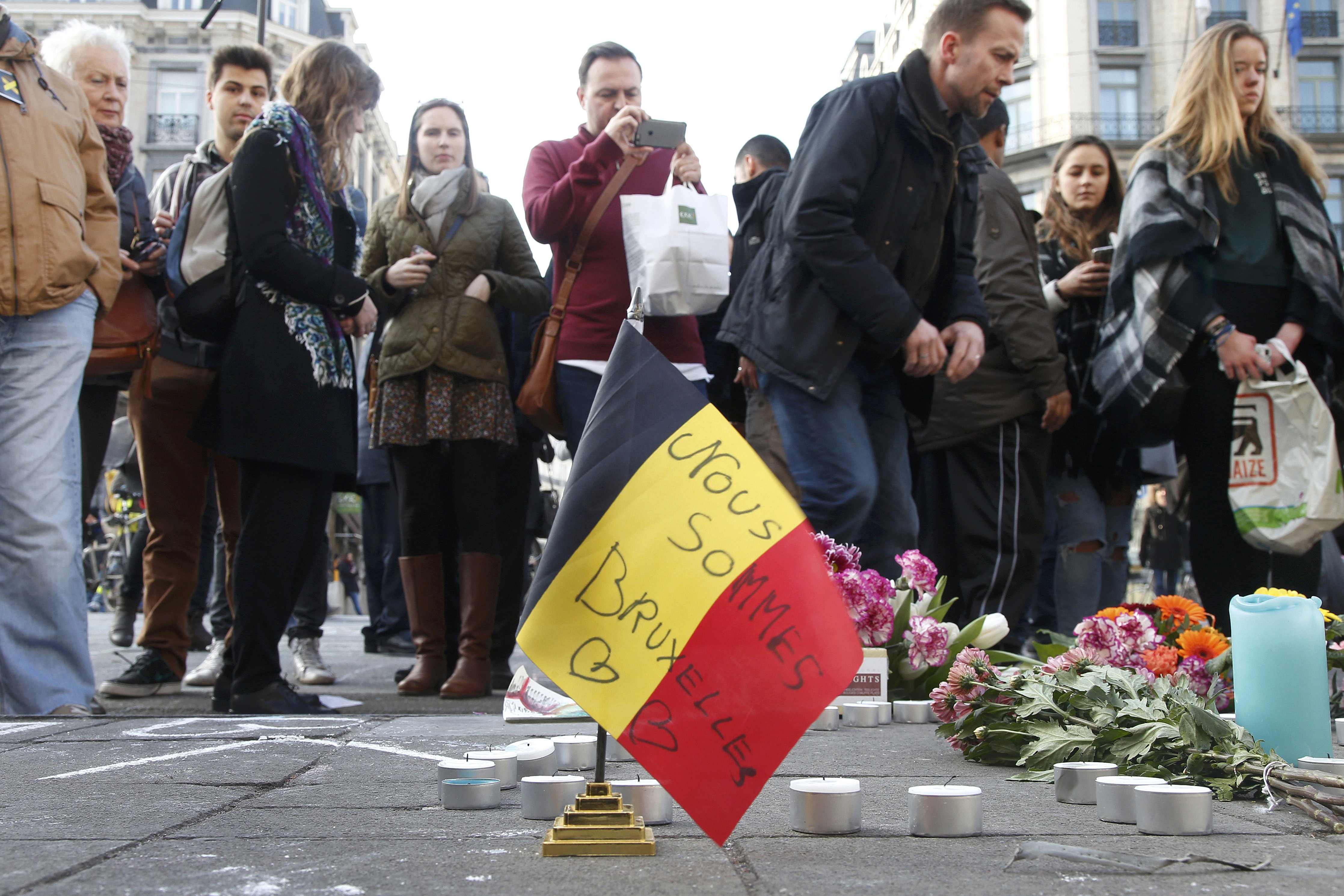 After a series of bombings in Brussels killed dozens Tuesday morning, foreign policy and national security are back at the center of the national conversation--and the 2016 race.

All five remaining presidential candidates weighed in on the attacks Tuesday, with policy prescriptions ranging from increasing surveillance and communication between law enforcement to shutting down the United States border and preventing Syrians from entering the country.

Here's a look at who's behind the scenes helping craft each candidate's foreign policy views:

As the former Secretary of State, Clinton has no shortage of people to call when it comes to foreign policy and national security issues. She denounced the attacks in Brussels Tuesday, calling for increased surveillance measures and communications in order to get ahead of terrorists' increasingly "sophisticated" planning and methods. "We have to also toughen, as you say, 'soft targets,' with greater police presence--there is no getting around that," she said Tuesday.

Clinton's top adviser on foreign policy is Jake Sullivan, who was a high-ranking aide of hers throughout her State tenure and started off early with the campaign last year. Sullivan served as Clinton's deputy chief of staff and director of policy planning during her four years at State, where he helped lay the groundwork for the Iran nuclear talks; before that, he advised Clinton's 2008 campaign on foreign policy issues. Sullivan's deputy on the campaign is Laura Rosenberger, another alum of the Clinton State Department; Rosenberger also worked at the National Security Council in the Obama administration.

Besides Sullivan and Rosenberger, Clinton's campaign has a hundreds-strong network of formal and informal advisers that are involved in working groups on various foreign policy and national security issues. Top officials with whom Clinton and her campaign are in frequent touch, according to Bloomberg, include former National Security Advisor Tom Donilon, former Defense Secretary Leon Panetta and former Secretary of State Madeleine Albright. From Clinton's tenure at state, other experts who advise the campaign informally include Michele Flournoy, Clinton's undersecretary of defense for policy; Kurt Campbell, who served as assistant secretary of state for East Asia and the Pacific; and Nicholas Burns, her undersecretary of state for political affairs.

Donald Trump in December controversially called for a temporary halt to Muslim immigration to the United States, and in response to the Brussels attacks Tuesday he called for the U.S. to "close our borders."

"We have to close our borders, make them so strong and let people into our country, but they have to be people that are going to be wonderful for our country," he said. He later clarified that he did not believe the U.S. should shut down the border entirely, just be "very, very strong and vigilant at the borders," and that people "from certain parts of the world, like Syria, without documentation should not be allowed in our country."

The GOP businessman unveiled his list of five foreign policy advisers on Monday in a meeting with The Washington Post's editorial board. The list includes one who was forced from his post as Defense Department inspector general, another who listed Model U.N. as an honor and one man who has come under fire from a major Muslim advocacy group.

One of the advisers, Joseph Schmitz, served as inspector general at the Defense Department during the George W. Bush administration, but he was forced out of the position because he was accused of protecting senior officials in the administration. In 2010, he contributed to a report from the neoconservative think tank Center for Security Policy, founded by an anti-Muslim activist, called "Shariah: The Threat to America." He has also been the general counsel for the parent company of the security services company previously known as Blackwater Worldwide. Blackwater was the defense contractor whose guards shot and killed 14 unarmed Iraqis in 2007 and wounded 17 others.

Another adviser is George Papadopoulos, previously an adviser for Ben Carson's presidential campaign, who graduated with a bachelor's degree in 2009 and a master's degree a year later. Among his awards and honors on his LinkedIn profile, he lists his position as U.S. Representative at the 2012 Geneva International Model United Nations. Walid Phares, who advised 2012 GOP presidential nominee Mitt Romney, is advising Trump. In 2011, Muslim advocacy group the Council on American-Islamic Relations (CAIR) called on Phares to step down from Romney's campaign because the group said he was "a conspiracy theorist" who had ties to anti-Muslim militias. His other advisers are Carter Page, a member of the Council on Foreign Relations, and Keith Kellogg, a former Army lieutenant general who served 32 years in the Army.

In the aftermath of the terrorist attacks in Paris last November, Sanders came under fire for his lack of emphasis on foreign policy issues on the campaign trail--but he's worked to beef up his foreign policy credentials since then, even delivering a foreign policy address on Monday.

Following Brussels, Sanders called for "improved intelligence-sharing" between the United States and its allies, as well as the "monitoring of social media" to better prevent ISIS recruitment online. He also said Republicans' calls to increase surveillance on American Muslims "would be unconstitutional." "We are fighting a terrorist organization ... not fighting a religion," he said.

The Vermont senator's campaign tapped Bill French, a policy analyst at the National Security Network, Foreign Policy reported in February. The NSN's stated mission is to build "a strong progressive national security and counter conservative spin"; French has focused extensively on the Middle East, and he's testified on Capitol Hill multiple times on various plans to combat and defeat the Islamic State.

Outside advisers formally affiliated with the campaign, with whom Sanders has spoken multiple times about foreign policy issues, include Larry Korb at the Center for American Progress, Joe Cirincione of the Ploughshares Fund and Gordon Adams, a professor emeritus at American University. Korb is a former assistant secretary of defense under Ronald Reagan, while Cirincione, a member of the Council on Foreign Relation and Secretary of State John Kerry's International Security Advisory Board, has also held positions at the Center for American Progress and the Carnegie Endowment for International Peace. Adams advised Al Gore's 2000 presidential campaign on defense issues and also served as the associate director for national security and international affairs at the Office of Management and Budget under President Bill Clinton.

Ted Cruz, who has blasted President Obama for not blaming many of these terrorist attacks on radical Islam, came under fire Tuesday for calling for strengthening law enforcement's ability to "patrol and secure Muslim neighborhoods before they become radicalized." The presidential candidate and Texas senator said this in a statement only a few hours after the bombings that left at least 36 people dead and several hundred injured in Brussels. The campaign issued a clarification in which communications director Alice Stewart said Cruz is calling for police to have every tool they need "to follow leads and to take action against those who would do us harm."

Last week, Cruz announced a list of his foreign policy advisers, which includes Frank Gaffney, who worked in the Defense Department under President Ronald Reagan. He founded the Center for Security Policy, an anti-Muslim think tank that has been widely accused of promoting conspiracy theories and claims that a "global jihad movement" exists. When Donald Trump proposed banning Muslims from entering the U.S., Trump cited a survey from the think tank that claimed that there is "great hatred towards Americans by large segments of the Muslim population."

Victoria Coates, who holds a Ph.D. in art history from the University of Pennsylvania, has served as an adviser to Cruz since 2013 and previously worked as a consulting curator at the Cleveland Museum of Art. She also served as a foreign policy adviser for Rick Perry's 2012 presidential campaign. Elliott Abrams is another Cruz adviser and is a senior fellow for Middle Eastern Studies at the Council on Foreign Relations, with expertise on the Middle East and the Israeli-Palestinian conflict. Under President George W. Bush, he served as deputy assistant to the president and deputy national security adviser.

The other advisers included Andrew McCarthy, a former chief assistant U.S. attorney for the Southern District of New York, Mary Habeck, who studies al Qaeda, ISIS and jihadi-salafism, and Jim Talent, a former U.S. senator from Missouri who served on the House and Senate Armed Services for more than a decade.

The Ohio governor is the only one of the remaining Republican candidates not to call for some sort of increased surveillance of or restrictions on Muslims in the United States. At a press conference Tuesday, he called for moving "aggressively against ISIS, in the air and on the ground."

In response to a question about Cruz's plan for increased surveillance of Muslims, Kasich replied: "My sense of it is that we are not at war with Islam--we are at war with radical Islam."

Kasich released a list of 25 members of his national security group back in February, with a mix of former government officials and think tank experts. Some top advisers include Richard Allen, a senior fellow at the Hoover Institution who advised Presidents Ronald Reagan and Richard Nixon on foreign policy and national security issues; Alvin "Buzzy" Krongard, a former executive director of the Central Intelligence Agency under President George W. Bush who also served on the advisory board for Blackwater, the security contractor that came under fire in Iraq in 2007; and William Schneider, Jr., a former undersecretary of state during the Reagan administration and former chairman of the Defense Science Board, also served as an aide at the Office of Management and Budget focusing on defense.

Other top advisers include Carol Haave, a former deputy undersecretary of Defense for counterintelligence and security, and Carrie Cordero, former counsel and assistant attorney general for national security at the Department of Justice.