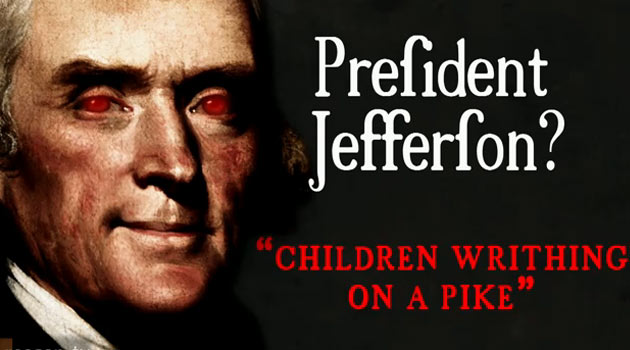 Libertarian magazine Reason has put together a pretty fantastic pair of attack ads that might have run against John Adams and Thomas Jefferson had television existed back in 1800.

Reason cleverly elected to use actual "statements made by, for, and against the nation's founders" in the attack ads, which underlines the fact that, contrary to what we may think, politics wasn't any more civil back then. (The sources are here.)

In the first spot, Adams is called a "blind, bald, crippled, toothless man," who - and this is direct from Jefferson's campaign - "is a hideous hermaphroditical character with neither the force and firmness of a man, nor the gentleness and sensibility of a woman."

As CNN notes, Adams responded by calling Jefferson "a mean-spirited, low-lived fellow, the son of a half-breed Indian squaw, sired by a Virginia mulatto father." (Jefferson, who would win the campaign to become the third president, was Adams' vice president at the time.)

The attack ad on Jefferson, meanwhile, claims that if he were to win, "murder, robbery, rape, adultery and incest will be openly taught and practiced, the air will be rent with the cries of the distressed, the soil will be soaked with blood and the nation black with crimes."

Continues the narrator: "Are you prepared to see your dwellings in flames? Female chastity violated? Children writhing on the pike?"