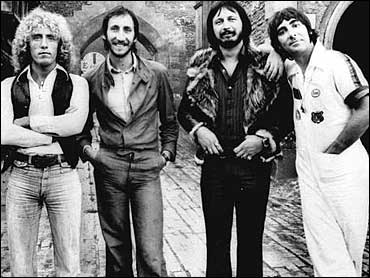 John Entwistle, the bassist for the innovative 1960s rock band The Who, was found dead Thursday in his hotel room of an apparent heart attack. He was 57.

Entwistle stood out because he played without emotion, a stark contrast to the antics of lead guitarist Pete Townshend and lead singer Roger Daltrey.

The group was scheduled to play at the Hard Rock Hotel-Casino on Friday, the first date of a three-month, nationwide tour. The Vegas show was canceled but the rest of the tour was undecided, said Beckye Levin of promoter Clear Channel Entertainment.

"I was told he passed away in his sleep last night," Levin said, breaking into sobs during a telephone interview.

Who manager Robert Rosenberg said he was "saddened and shocked."

The first-generation English rockers, born in London in the wake of The Blitz of World War II, exploded onto the charts in the 1960s.

The Who came together in London in 1964 and were a premiere rock band through the 1970s.

The Who were the voice of a new breed. Their concerts were literally explosive -- a fusion of audacious acrobatics, martial precision and high octane rock 'n' roll that blew away audiences and left the stage and their instruments a smoldering wreck.

During a concert at the Rikki Tik Club in England in May 1966, Townshend smacked Entwistle in the head with his guitar; a year later, drummer Keith Moon, at the close of the band's performance on "The Smothers Brothers Comedy Hour," detonated a flash bomb that destroyed his drum set, stunned guests and damaged Townshend's ears.

Moon, the band's original drummer, lived life to the edge, right up until his death in 1978 in his London apartment at age 31.

The remaining members of the band retired in 1982 after a concert in Toronto, but they reunited and had toured frequently in recent years. Their music and voices were even featured on "The Simpsons" last year.

Entwistle and Townshend met in 1958 in school in London. Later, they began playing together, first Dixieland jazz and then rock.

In 1960, Daltrey invited Entwistle to join The Detours as bassist. He convinced Daltrey to hire Townshend as rhythm guitarist.

In 1964, Moon joined the band, which changed its name to The Who.

In a 1975 interview with Zoo World, Entwistle said he didn't worry about the wallflower label some had attached to him.

"I used to care. I used to get very paranoiac about it, but now I realize I've got, maybe not such a demonstrative following, but an equally large following as the rest of them," Entwistle said.

Entwistle was the lone member of The Who with any formal musical training. He was among the first in rock to experiment with the six- and eight-string bass, all played while standing immobile on stage in contrast with the other three band members.

Entwistle was the first to release a solo album and later formed his own ensemble, Ox, while continuing to play with The Who. He also toured with The John Entwistle Band.