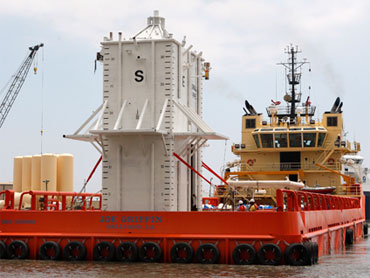 The Obama administration today to released new safety regulations to allow for offshore oil and gas exploration to resume in shallow waters, even as tens of thousands of barrels of oil continue to gush into the Gulf of Mexico from the Deepwater Horizon spill.

President Obama instituted a six-month moratorium on new offshore drilling in the wake of the Deepwater Horizon oil rig explosion that caused what is now the largest oil spill in American history. The Interior Department's Minerals Management Service canceled some offshore drilling permits last week and has postponed other plans as it works on new safety regulations.

However, Gulf Coast residents are concerned the halt in drilling could cost them thousands of jobs, crushing a regional economy already in dire straits after the spill, CBS News Correspondent Chip Reid reported Friday.

An op-ed in the New Orleans Times-Picayune noted Friday that "many Louisianians shrug off the dangers of off-shore drilling because we're more afraid of not having that industry at all." Louisiana Gov. Bobby Jindal last Wednesday sent a letter to Mr. Obama and Interior Secretary Ken Salazar to express his "grave concerns regarding the severe economic impact" on the suspension of already-approved deepwater drilling.

The new safety measures issued today apply to both deepwater and shallow water operations, although drilling operations in water deeper than 500 feet remain under the moratorium.

"Oil and gas from the Outer Continental Shelf remains an important component of our energy security as we transition to the clean energy economy, but we must ensure that offshore drilling is conducted safely and in compliance with the law," Salazar said in a statement. "The deepwater drilling moratorium that is in place will provide time for the Presidential Commission to complete its work, but production and shallow water drilling may continue under the stronger safety requirements that we are implementing today."

Meanwhile, House Democratic leaders are meeting today to discuss proposals to raise the cap on liability damages oil companies are responsible for after an oil spill, as well as to consider other legislative actions in the wake of the Gulf disaster. Oil companies are now responsible for paying $75 million in damages unless there is criminal negligence involved.