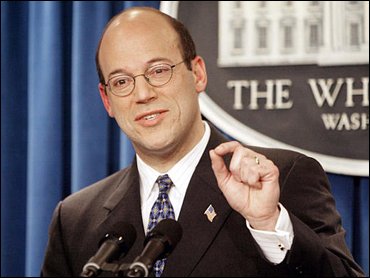 White House press secretary Ari Fleischer, the public face of the Bush administration through two wars and a terrorist attack, said Monday he will resign in July to enter the private sector.

"I love this job," Fleischer told reporters at his informal Monday morning briefing. "I believe deeply about President Bush as a man and I believe deeply in his policies, but it's my time to go."

He would not speculate on who would take his place, but presidential aides said deputy press secretary Scott McClellan was the likely successor, although there are other possibilities.

Fleischer said he wanted to leave the hard-driving job before Mr. Bush's re-election campaign geared up.

"I want to do something more relaxing — like dismantle live nuclear weapons," he quipped.

"It's a 24/7 job. People burn out," says CBS News Senior Political Editor Dotty Lynch. "Being press secretary in the White House and having a campaign going at the same time is a lot of pressure."

Fleischer clashed at times with the White House press corps and had an uneasy relationship with some senior Bush aides, but he said the departure was his idea. He notified Mr. Bush of his decision Friday. The president ended the conversation "by kissing me on the head," the spokesman said.

"I informed him that after 21 years of nothing in my career other than government and politics, after almost four wonderful years with Gov. Bush/President Bush, my time has come to enter the private sector to pursue more relaxing endeavors and see more of my wife," he said.

Fleischer, 42, got married six months ago. He said he wanted to go on the speaking circuit and maybe do some writing.

He said he had not talked with anyone outside the White House about a new job.

Mr. Bush has not decided who will replace Fleischer, two senior White House officials said. The officials, speaking on condition of anonymity, said Texas native McClellan is the likely replacement but there are other candidates. Republican strategist Ed Gillespie and Pentagon spokesman Victoria Clarke have been mentioned by top Republicans as potential prospects.

A cautious and calibrating press secretary, Fleischer has been the public voice of the presidency through the Sept. 11, 2001, attacks, the war in Afghanistan and the Iraq war, loyally putting the best spin on events. He frustrated reporters by constantly refusing to answer the toughest questions and sometimes irked his White House colleagues by pushing for access behind the scenes — often without success.

His meatless pronouncements on Bush policy are generally in keeping with a White House that keeps a tight lid on information. Though he is not as close to the president as other top aides, Fleischer has earned Mr. Bush's respect by taming what the president considers to be a hostile press corps.

He also has sought to ease tensions between the press at the White House, though he leaves with a mixed record on that score.

"I think he was the right person for the job and for this president," said Joe Lockhart, former White House spokesman for Democratic President Bill Clinton. "The president wanted somebody who was loyal, who was disciplined, someone who needed to keep a secret. I think he was an articulate spokesman in a difficult situation, working for a president who demanded secrecy beyond what was really called for."

Like most press secretaries, Fleischer has had his share of fumbles and dodges in the hothouse atmosphere of the White House briefing room. He acknowledged shooting himself in the foot when he snapped that "one bullet" in Saddam Hussein's head would be cheaper than a war.

In the run-up to war with Iraq, Fleischer denied reports that Mr. Bush was meeting with Prime Minister Tony Blair abroad. The trip was announced the next day.

When it was pointed out to him that Mr. Bush's top aides were at the anniversary event, Fleischer stammered.

It turned out Cheney had been spirited away to a secret location because of the same potential threats to the country that prompted the government to heighten the public terrorist alert soon after.

Over the months, a pattern of finger-pointing has emerged with every miscue: Fleischer' supporters would privately accuse superiors of passing on bad information to the press office while the senior staff would quietly point the finger back to Fleischer or his office. Still, senior White House officials said Monday that Fleischer left on his own, and that Bush wanted him to stay through the re-election.

Goofs sometimes gave way to goofy — such as when Fleischer joked about potatoes attacking America.

This year, Fleischer defended Bush's plan to deny normal collective bargaining and other employee rights to workers at the proposed Homeland Security Department by noting that presidents have long had the authority to suspend such rights in a national emergency.

Senate opponents would stop Bush from using powers he already has in other departments, he contended.