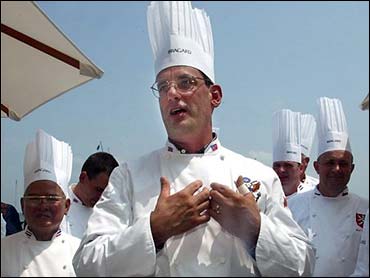 Fancy state dinners aren't all the new White House chef will need to do — the Bushes are looking for someone who knows barbecue and other good old American fare.

Laura Bush told Newsweek she doesn't expect that any of the celebrity chefs with books or television shows will be interested in becoming head chef at the presidential home. But she's looking to fill the job with someone who "can really showcase American foods."

The previous White House chef, Walter Scheib III, has left to pursue new opportunities after nearly 11 years of cooking for two presidents, and the first lady is looking for a replacement who can cater to the first family's native Texan pallets.

"We like spicy food of all kinds," she said in the magazine's Feb. 28 issue. "We like, obviously, Tex-Mex and barbecue. ... George is a very good eater."

The chef will have ample opportunity to make dinner for the first family — the Bushes are known for staying in most nights rather than socializing like their predecessors. Laura Bush said they do go out to friends' dinner parties when someone thinks to ask them.

"We don't actually get invited to that many dinner parties," she said. "I think people think we're going to invite them, which we do."