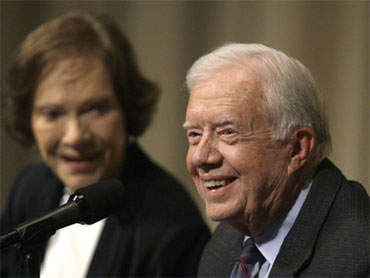 (AP Photo/John Bazemore)
White House press secretary Robert Gibbs reiterated at his press briefing this afternoon that President Obama disagrees with former President Carter's assertion that Joe Wilson's "you lie" outburst and other animosity directed at the president is grounded in racism.

"The president does not believe that -- that the criticism comes based on the color of his skin," Gibbs said. "We understand that people have disagreements with some of the decisions that we've made and some of the extraordinary actions that had to be undertaken by this administration and previous administrations to stabilize our financial system, to ensure viability of our domestic auto industry."

"I don't -- I don't think that, you know, the president does not believe that it's based on the color of his skin," he continued.

Gibbs later added that the president "does not believe that the majority of this" is grounded in racism.

Gibbs was asked by reporters why this is not a "teachable moment" on race similar to the one that Mr. Obama identified following the Cambridge police flap.

"Obviously, the president has, and has always had, great concerns about race relations in this country," he replied. "He's talked about them in speeches. He's talked about them throughout his career in politics; believes we've made great strides, and obviously we've got work to do. But I -- I don't -- I'm not sure I see this -- this large national conversation going on right now."

Carter said Tuesday that "there is an inherent feeling among many in this country that an African-American should not be president," arguing that Wilson's outburst was "based on racism."

Alan Wilson, Joe Wilson's son, countered that "there is not a racist bone in my dad's body."

The South Carolina Republican's outburst came after Mr. Obama said that under his health care plan illegal immigrants would not be eligible for health insurance subsidies.