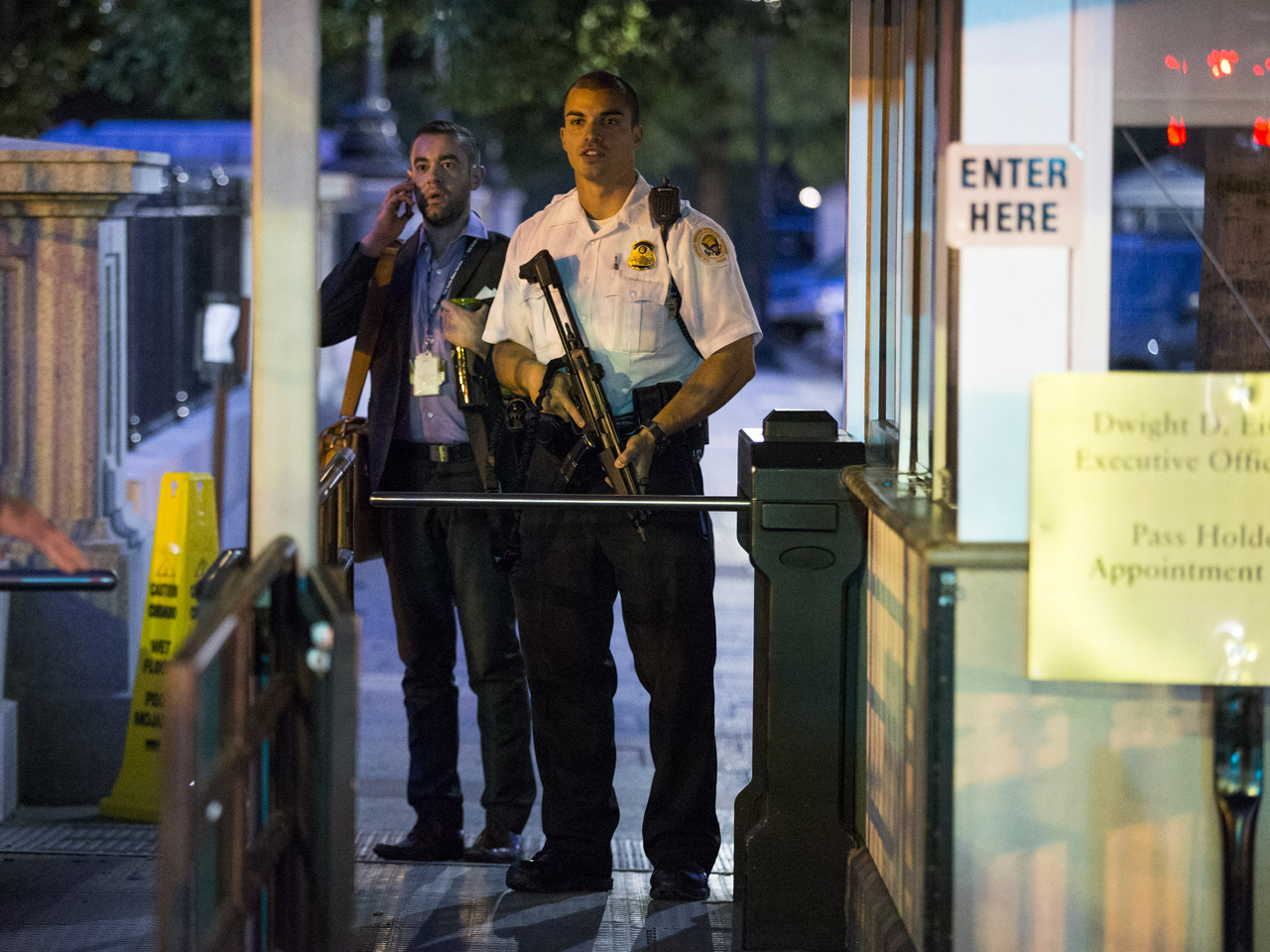 WASHINGTON -- The Secret Service is coming under intense scrutiny after a man who hopped the White House fence made it all the way through the front door before being apprehended.

President Obama and his daughters had just departed the White House on Friday evening when an intruder scaled the north fence, darted across the lawn and into the presidential residence, where agents nabbed him. The security breach triggered a rare evacuation of much of the White House, with Secret Service officers drawing their guns as they rushed staffers and journalists out a side door.

There was also a brief lockdown at the White House on Saturday morning related to the follow-up investigation as officials searched the North Lawn for any items the suspect may have lost or dropped during the incident.

The moment of chaos outside the White House on Friday was caught on cell phone video, CBS News correspondent Julianna Goldman reports.

"Everybody out right now," a man is heard saying on the video. "Go back. Everybody into the park right now."

For the Secret Service, the incident was a devastating episode that prompted fresh questions about the storied agency and its ability to protect the president. Rep. Jason Chaffetz, R-Utah, who chairs the House subpanel on national security oversight, called it "totally unacceptable" but said the incident was just one of a string of security failings on the Secret Service's watch.

"Unfortunately, they are failing to do their job," Chaffetz said. "These are good men and women, but the Secret Service leadership has a lot of questions to answer."

"Was the door open?" he added incredulously.

The Secret Service said the incident would be carefully reviewed to ensure proper protocols were followed.

The man in jeans and a dark shirt who scaled the fence shortly after 7 p.m. appeared to be unarmed, but ignored commands from officers to halt, Secret Service spokesman Ed Donovan said. He was tackled just inside the doors of the North Portico, the grand, columned entrance that looks out over Pennsylvania Avenue. A search of the suspect turned up no weapons.

The Secret Service identified the suspect as Omar J. Gonzalez, a 42-year-old man from Copperas Cove, Texas. He was charged with unlawful entry into the White House complex and transported to a nearby hospital complaining of chest pain. Attempts to reach Gonzalez or his relatives by phone were unsuccessful.

The current charge against the suspect is unlawful entry into the White House complex. A subsequent search of the suspect's vehicle may yield additional charges, U.S. officials said.

Although it's not uncommon for people to make it over the White House fence, they're typically stopped almost immediately and rarely get very far. Video from the scene showed the intruder sprinting across the lawn as Secret Service agents shouted at nearby pedestrians to clear the area.

"This situation was a little different than other incidents we have at the White House," Donovan said. "There will be a thorough investigation into the incident."

Only minutes before the breach, Mr. Obama had boarded his helicopter on the South Lawn with his daughters and one of their friends, who was joining the Obamas for a weekend getaway to Camp David, the presidential retreat in Maryland. First lady Michelle Obama had traveled separately to Camp David and was not at home.

"Any time there is a security incident it has to be considered in context," a law enforcement official told CBS News. "The family was not in residence, the individual didn't appear to have a weapon. He wasn't carrying any bags or a backpack...The Secret Service has to be able to balance security with access and reasonableness. Closing Pennsylvania Avenue to pedestrians is not reasonable but this access does result in fence jumpers periodically."

It was unclear whether any other fence-jumpers have ever made it into the White House, one of the most highly protected buildings in the world. But Friday's incident was just the latest setback for an elite agency whose reputation has suffered a succession of blows in recent years.

In 2012, 13 Secret Service agents and officers were implicated in a prostitution scandal during preparations for Mr. Obama's trip to Cartagena, Colombia. The next year, two officers were removed from the president's detail after another alleged incident of sexually-related misconduct. And in March, an agent was found drunk by staff at a Dutch hotel the day before Mr. Obama was set to arrive in the Netherlands.

Mr. Obama appointed the agency's first female director last year as a sign he wanted to change the culture and restore public confidence in its operations. An inspector general's report in December found no evidence of widespread misconduct.

The Secret Service has struggled in recent years to strike the appropriate balance between ensuring the first family's security and preserving the public's access to the White House grounds. Once open to vehicles, the stretch of Pennsylvania Avenue in front of the White House was confined to pedestrians after the Oklahoma City bombing, but officials have been reluctant to restrict access to the area further.

Evacuations at the White House are extremely rare. Typically, when someone jumps the White House fence, the compound is put on lockdown and those inside remain in place while officers respond. Last week, the Secret Service apprehended a man who jumped over the same stretch of fence on the anniversary of the Sept. 11 attacks, prompting officers to draw their firearms and deploy service dogs as they took the man into custody.