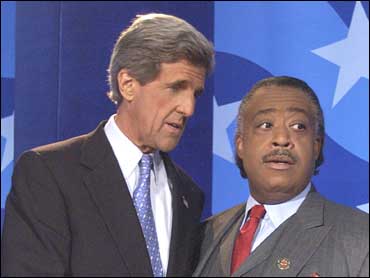 Sen. Joe Lieberman accused Howard Dean in a campaign debate of turning his back on Israel, and the Democratic presidential front-runner shot back that he and former President Clinton held the same view on the issue.

"It doesn't help…to demagogue this issue," Dean quickly added in the sharpest clash of the young Democratic debate season.

Two days before the second anniversary of the Sept. 11 attacks, Democrats criticized President Bush's handling of the war on terror at the same time they began to jab one another over foreign policy in the Tuesday night debate.

Rep. Dennis Kucinich of Ohio criticized Rep. Dick Gephardt of Missouri for voting to support Mr. Bush's call for war in Iraq, saying "I wish you would have told him no" at a face-to-face meeting.

Without mentioning any names, Sen. Bob Graham of Florida attacked Democrats for voting for the same legislation, saying they "gave the president a blank check."

Sen. John Kerry of Massachusetts, one of those to support the measure, defended his vote as necessary to show Saddam Hussein that the United States was serious about the need for international weapons inspectors to operate freely in Iraq.

The exchange underscored a deep divide in the field of nine — between candidates Dean, Graham and Kucinich who opposed the war and those like Kerry, Lieberman and Gephardt who voted for the Bush-backed Iraq resolution.

It is the ultimate Democratic dilemma: Dean's momentum is fueled by his anti-war stance, but many party leaders fear that position could undermine their nominee in the general election campaign against a relatively popular wartime president.

The debate unfolded on a stage at Morgan State University, a historically black college in Baltimore, and was hosted by the Congressional Black Caucus. Brit Hume of the Fox News Channel handled the moderator's duties.

In 90 minutes of debate, not all the issues were weighty. One questioner asked the nine would-be presidents to name their favorite song. "Changes in Latitudes, Changes in Attitudes," said Graham, referring to a Jimmy Buffett tune.

Dean, the former governor of Vermont, has been the phenomenon of the nominating campaign to date, drawing huge crowds, displacing Kerry atop the polls in New Hampshire and raising more money than his rivals.

That has his foes looking for ways to slow his momentum, and Lieberman thought he saw an opening on an issue of particular concern to Jewish voters whose support — and campaign contributions — are prized by all candidates.

The 2000 Democratic vice presidential candidate, Lieberman said comments Dean made last week about the Middle East "break a 50-year record in which presidents, Republicans and Democrats, members of Congress of both parties have supported our relationship with Israel."

Dean said last week, "it's not our place to take sides" in the Middle East conflict, saying the United States must help facilitate an agreement.

The Jewish senator from Connecticut added that Dean "has said he would not take sides" in the Middle East, "but then he has said Israel ought to get out of the West Bank and an enormous number of settlements" should be demolished.

"I'm disappointed in Joe," Dean said. "My position on Israel is exactly the same as Bill Clinton's," he said.

"I think America needs to be an honest broker. We desperately need peace in the Middle East." Later, Dean said he was calling on Bush to send Mr. Clinton or former President Jimmy Carter to the Middle East to help ease tensions.

In 1993, Mr. Clinton sought to broker a peace between Israel and the Palestine Liberation Organization, bringing Israeli President Yitzhak Rabin and Yasser Arafat together at the White House for talks and a memorable handshake.

Several of the contenders criticized Mr. Bush over domestic issues.

Sen. John Edwards of North Carolina said the president couldn't find more money for education and health care at the same time he was seeking billions more for the war on terror.

"This administration has pandered to fear and frightened the American people at every turn and the Patriot Act is just part of that," said former Illinois Sen. Carol Moseley Braun, referring to legislation the administration has used to hunt for suspected terrorists in this country.

Republicans rebutted the charges against Mr. Bush. "The Democratic candidates continued their patter of political hate speech. These kinds of harsh, bitter personal attacks are unprecedented in the history of presidential politics," said Ed Gillespie, the party's chairman.

The Democrats were at pains to stress their support for civil rights and other concerns to blacks — although one candidate, Al Sharpton, said black voters shouldn't allow themselves to be taken for granted.

"We need to correct the party so we can beat Bush with one expanded pie," the civil rights activist said in remarks critical of Democratic attentiveness to black concerns.

But international affairs dominated the debate.

Alone among the nine, Kucinich said he would vote against Mr. Bush's call for $87 billion more for postwar Iraq.

Kerry charged the president with an "act of negligence of remarkable proportions" for failing to have a postwar plan in Iraq, and Lieberman said the Bush administration has "no exit strategy."

Sharpton was as unstinting as anyone in his criticism. He said Osama bin Laden has escaped capture for two years after the attacks by al Qaeda. "This guy has out more videos than a rock star, but George Bush's intelligence agencies can't find him," he said.

The debate was interrupted several times by protesters in the hall; university police arrested four people.

"Eighteen months ago, we had al Qaeda almost dismantled, Osama bin Laden was surrounded in the mountains of eastern Afghanistan. At exactly that point, we lost interest in the war against the Taliban and al Qaeda, shifted it to Iraq, allowed Osama bin Laden to escape from the news and now allowed the forces of al Qaeda to regroup," Graham said.