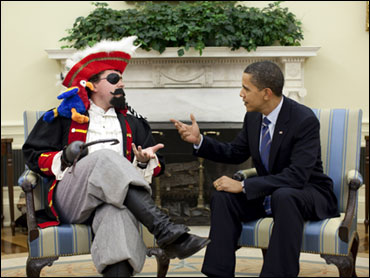 (White House/Pete Souza)
Pity the poor historian a couple hundred years from now, at a loss to figure out why Barack Obama, an American president at the start of the 21st century, was photographed meeting in the Oval Office with – a pirate.

What kind of unexplained policy initiative was being played out in this photo, the historian might wonder, perhaps confusing it for something other than what it was: a gag – one of dozens – for the president's remarks at the White House Correspondent's Dinner.

The joke was the idea of three top presidential aides including senior advisor David Axelrod.

They would have Mr. Obama refer to his recent meetings with world leaders.

But the punch line was his assertion that he was living up to his campaign pledge that "we can't just talk to our friends." And with that, up would pop the photo of President Obama with a pirate.

This was no modern-day pirate of the type that hijacks ships off the horn of Africa. It was a buccaneer in full Captain Hook regalia: knee-high boots, a cut-away coat, an eye patch and even a parrot on his shoulder.

To get a Blackbeard, you just don't look up "pirate" in the Yellow Pages, unless you're in Somalia. And even there, pirates work in plain-clothes, except for their automatic weapons and rocket-propelled grenades.

The White House needed a pirate, and it turned to speechwriter Cody Keenan. It was a role not exactly in his job description.

He was "more than game," said an official familiar with the shenanigans, "as long as the costume was legit."

Fellow speechwriter Jon Lovett called costume shops all over town until he found the costume in the picture. "The President loved it," said the official.

The gag also had Mr. Obama play off his recent encounter with Venezuelan President Hugo Chavez, a frequent vituperative critic of U.S. policy, who gave Mr. Obama a book when they met at the Summit of the Americas in Trinidad and Tobago last month.

The writers worked that into the pirate gag.

"Now let me be clear," said the president of the pirate, "just because he handed me a copy of Peter Pan does not mean that I'm going to read it -- but it's good diplomatic practice to just accept these gifts."

It wasn't even close to the biggest laugh of the evening for President Obama – but for speechwriter Cody Keenan, it's a highlight of his White House career. Maybe not.

But for the benefit of that historian 200 years from now, please stash this story in the presidential archives.