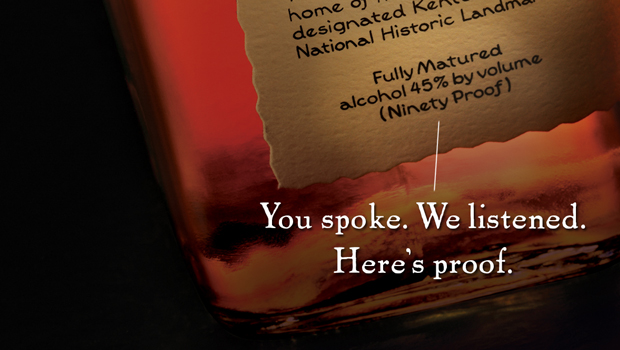 LOUISVILLE, Ky. The producer of Maker's Mark bourbon is reversing a decision to cut the amount of alcohol in bottles of its famous whiskey.

Rob Samuels, Maker's Mark's chief operating officer, said Sunday that it is restoring the alcohol volume of its product to its historic level of 45 percent, or 90 proof. Last week, it said it was lowering the amount to 42 percent, or 84 proof, because of a supply shortage.

The company in a statement on its website on Sunday said to its followers: "You spoke. We listened. And we're sincerely sorry we let you down."

The brand known for its square bottles sealed in red wax has struggled to keep up with demand. Distribution has been squeezed, and the brand had to curtail shipments to some overseas markets.

Fans of the whiskey applauded the move and questioned why the company moved to change in the first place.

"Some things you just got to leave alone," said Todd Matthews, 42, of Livingston, Tenn.

Company officials said much customer feedback came from Twitter and Facebook. On those sites, comments on Sunday's change of course ranged from angry to celebratory to self-congratulatory. The statement on Maker's Mark's Facebook page drew more than 14,000 "likes" and 2,200 comments within two hours of Sunday's announcement.

"We've been tremendously humbled over the last week or so," Samuels, grandson of the brand's founder, said of customers' reactions.

The change in recipe started with a shortage of the bourbon amid an ongoing expansion of the company's operations that cost tens of millions of dollars.

Maker's Mark Chairman Emeritus Bill Samuels, the founder's son, said the company focused almost exclusively on not altering the taste of the bourbon while stretching the available product and didn't consider the emotional attachment that customers have to the brand and its composition.

Bill Samuels said the company tinkered with how much water to add and keep the taste the same for about three months before making the announcement about the change Monday. It marked the first time the bourbon brand, more than a half-century old, had altered its proof or alcohol volume.

"Our focus was on the supply problem. That led to us focusing on a solution," Bill Samuels said. "We got it totally wrong."

Both Bill and Rob Samuels said customer reaction was immediate. Company officials heard from "thousands and thousands of consumers" that a bourbon shortage was preferable to a change in how the spirits were made, Bill Samuels said.

"They would rather put up with the occasional supply shortage than put up with any change in their hand-made bourbon," Rob Samuels said.

The change in alcohol volume called for the recipe and process to stay the same, except for a "touch more water" to be added when the whiskey comes out of the barrel for bottling, Rob Samuels said.

When production restarts Monday, those plans are off the table, Bill Samuels said.

"We really made this decision after an enormous amount of thought, and we focused on the wrong things," Bill Samuels said.

Maker's Mark is owned by spirits company Beam Inc., based in Deerfield, Ill. Its other brands include Jim Beam bourbon.

Maker's is made at a distillery near the small town of Loretto, 45 miles south of Louisville.

Its bourbon ages in barrels for at least six summers and no longer than seven years before bottling.

The supply shortage at Maker's comes amid growing demand for Kentucky bourbons in general.

Kentucky produces 95 percent of the world's bourbon supply, according to the Kentucky Distillers' Association. There are 4.9 million bourbon barrels aging in Kentucky, which outnumbers the state's population.

Trouble at the office: When to go to HR, and when not
Thanks for reading CBS NEWS.
Create your free account or log in
for more features.
View CBS News In
CBS News App Open
Chrome Safari Continue
Be the first to know
Get browser notifications for breaking news, live events, and exclusive reporting.