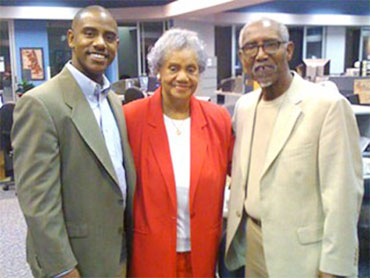 HAMMOND, Ind. (CBS/AP) As more than a thousand mourners gathered at a Munster, Ind. church for the parents of Chicago CLTV television host Garrard McClendon, police say charges have been filed against two teenagers in connection with their deaths, but still no charges of murder.

Hammond police said at a Monday news conference that 17-year-old Reo Thompson and 18-year-old Gregory Brooks, Jr., are each charged with two counts of robbery, auto theft, two counts of burglary and four counts of confinement.

Both teenagers are held in Chicago and waived extradition hearings on Monday. As of now, no murder charges have been filed, but authorities continue to investigate.

After the service, Garrard McClendon called for a "day of forgiveness," reported the Chicago Tribune.

"The pain is terrible," the television host said according to the paper. "My parents didn't deserve this, but we forgive those that did this to my parents."