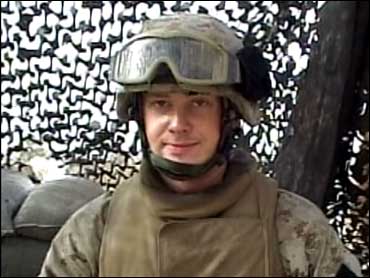 The most dangerous part of Iraq is still the region west of Baghdad, especially the city of Ramadi. That's where CBS News chief foreign correspondent Lara Logan joined U.S. Marines for her series, On The Front Line.

The Marines of Kilo company are under attack yet again. They're on the roof of the government center, and the enemy has just opened up. Small arms fire came in first. The Marines have returned fire with everything they've got.

From their posts on top of the building, they defend the government center, now the symbol of U.S. efforts to stabilize the most violent region in Iraq.

Three of their positions are taking fire simultaneously. That's something 21-year-old Lance Cpl. Jefferson Ortiz says the Marines quickly get used to.

"Every Saturday ... Saturday at the government center right here," he says. "This is our weekend right here. No spring break for us. Just shooting."

The deathly whine of incoming rounds is overwhelmed by the thunder of the Marines' guns. Their commander says there must be no doubt they mean business.

"Strength speaks volumes in this part of the world," says Capt. Andrew Del Gaudio. He speaks from experience: His Marines battled al Qaeda in this attack on Abu Ghraib prison on April 2 last year.

On April 2 of this year, he lost three Marines and a sailor to a roadside bomb in Ramadi.

Kevin Johnson, a 19-year-old lance corporal, says for him, that was the day the war became real.

The reality is that more Marines probably will die here. Half of all U.S. servicemen killed in Iraq during March gave their lives in Ramadi, now the last major stronghold of the Iraqi insurgency.

Incoming mortars, like a 60mm round that failed to detonate, remind Kilo company how close they come to death every day.

"It's about 10 feet from our post over there — 10 to 15 feet," says a Marine of the failed mortar round. When asked if he'd been lucky, the Marine replied, "Yeah … countin' the days — you gotta roll those dice, you know."

No one is gambling more with his life than the Iraqi governor in charge of Ramadi, Maamoon al-Awani, who has survived 29 assassination attempts. In the latest one, last week, 10 people died but the governor escaped unhurt. He returned to work at the government center the next day ... where it was business as usual: The Marines silenced their attackers, again. But it's never for long.

The Marines face an average of five attacks per day. This time, muzzle flashes are seen from a deserted building repeatedly used to attack them.

The enemy moves in and out of these houses freely because they're unoccupied. Lt. Carlos Goetz says it's a constant battle to deny them safe haven.

This time, two 500-pound smart bombs slam into the back side of the building, followed by three more. The Marines estimate eight enemy dead, so it's a victory of sorts. But even they say "we cannot kill all the people here who want to kill us." Their priority is keeping each other alive — and keeping the government center out of enemy hands.

In less than nine months, that commitment has already cost 14 American lives.