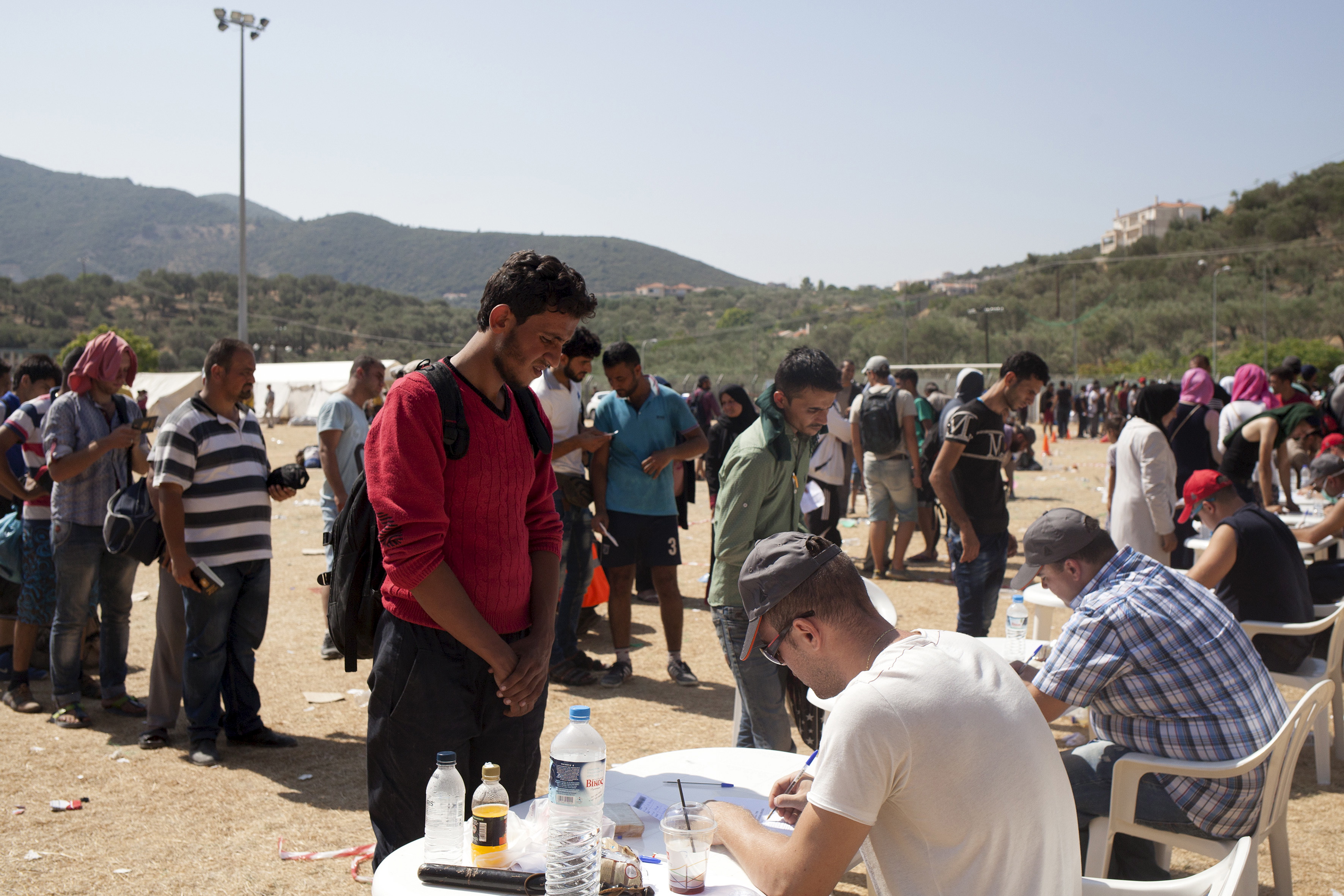 As European leaders grapple with an influx of Syrians seeking refuge from their own war-torn nation, President Obama and other American leaders are considering what role the U.S. should play in the crisis.

The United States has taken in 1,500 Syrian refugees since the Syrian conflict began about four years ago, with roughly 1,300 coming in this year. Another 300 are expected to be settled in the U.S. within the next fews months. The U.S. has also provided more than $4 billion for humanitarian aid in Syria since the crisis began.

The administration, led by the State Department, is considering "a wide range of options" for increasing its support of refugees, White House spokesman Josh Earnest said Tuesday, without mentioning any specific options.

In the meantime, the 2016 White House hopefuls from both sides of the aisle are explaining how they'd approach the issue. Here's a look at their comments so far:

"I think the entire world has to come together," the Democratic candidate said to NBC on Friday. "It should not be just one or two countries, or not just Europe and the United States. We should do our part, as should the Europeans."

However, she added, "we have got to come to grips with the fact that this [crisis] is not going away, and the millions of people who are fleeing- need safe places to be. But the conflict needs to be brought under control."

Asked whether the Obama administration failed to curb the crisis in the first place, the former secretary of state asserted, "I advocated for, as I say, a more robust policy."

"But sitting here, I can't say that that would have, on its own, made a difference," she continued. "Because this had to be an international effort. And, of course, we know the Russians were standing in the way... So we know that this is not just a problem that the United States can solve. We have to do what I did with the Iranian sanctions. I had to get the Russians on board. I had to get the Chinese on board. It was not easy. But that's the kind of intensive diplomacy that is going to be required in order to stop the flow of refugees and to try to bring some peace and security back to the region."

The former Maryland governor was one of the first White House hopefuls to weigh in on this issue, releasing a statement on Saturday calling on the United States to take in at least 65,000 refugees by the end of 2016.

"Americans are a generous and compassionate people. But today our policies are falling short of those values," the Democratic candidate said. "We must do more to support Syrian refugees--and we must certainly welcome more than the proposed 5,000 to 8,000 refugees next year."

The International Rescue Committee and Senate Democrats have also said the U.S. to welcome 65,000 refugees, and over the weekend, O'Malley invited his supporters to make the same request on a petition on his website.

The Republican 2016 candidate and Ohio governor told CBS News' Nancy Cordes that the U.S. does "have to play a role" with humanitarian assistance and logistics. However, he declined to say just how many refugees the United States should take in. "This is fundamentally a European issue," he said.

Kasich added that the United States' "confusing" policies in the Middle East have not helped the situation. "America needs to lead in the world and be clear about what we're all about," he said.

Donald Trump: "Europe is handling it"

Republican candidate Donald Trump said on MSNBC on Friday that the U.S. should "possibly" take in refugees.

"But we have so many problems of our own," he added. "We have border problems that are big league that I exposed... We have so many problems to solve... We have to fix our own country. Now, Europe is handling it. Germany has been very generous so far, which is very surprising to me, to be honest with you. But there's a huge problem, and we should help as much as possible, but we do have to fix our own country."

Lindsey Graham: "Take our fair share" or "take down the Statue of Liberty"

"We should take our fair share," Sen. Lindsey Graham, R-South Carolina, said of the Syrian refugees at a Tuesday luncheon at the National Press Club in Washington. He declined to say how many but made an impassioned statement about the United States' moral obligation to step up its assistance.

Given the current number of refugees coming in, "We should take down the Statue of Liberty and tear it down," Graham said. "This is our response as a nation, just tear it down. We don't mean it anymore."

The Republican candidate called the current U.S. response a "blight on our honor" and told Europe to "up your game." He added, "All you see happening in Syria, the worst is yet to come."

Carly Fiorina: Be careful about letting in terrorists

"The United States honestly, sadly, cannot relax our entrance criteria," she said on CBS' Face the Nation on Sunday. "We are having to be very careful about who we let enter this country from these war torn regions to ensure that terrorists are not coming here. I think the Europeans need to continue to step up here both in terms of the amount of money they provide for humanitarian relief. They have not done as much as the United States has done on that front."

New Jersey Gov. Chris Christie said on Fox News on Tuesday morning that if he were president, "I would sit down with allies and figure out how we can help."

He declined to say how many refugees the U.S. should take in, simply insisting that the U.S. and other nations must "work together." He added that "America is a compassionate country" and blamed the ongoing Syrian crisis on President Obama's "failed foreign policy."

The Wisconsin governor and GOP candidate told reporters on Monday that talking about Syrian refugees addresses "the symptoms and now that the core problem is."

"The core problem is the Obama-Clinton doctrine... that has empowered ISIS to take the territory they have in Iraq and continue to have the pretense they have in Syria," he said from the campaign trail in New Hampshire. "We need to push back, and we need a president [that on] Day One is going to send a clear message by lifting the political restrictions on our military personnel and at the same time by terminating the Iran deal, which is a bad deal... Ceding power to Iran and that region only empowered ISIS and other forms of radical Islamic terrorism."

Marco Rubio: Open to taking in refugees, but cautiously

"We've always been a country that's been willing to accept people who have been displaced," Sen. Marco Rubio, R-Florida, said in an interview with Boston Herald radio, "and I would be open to that if it can done in a way that allows us to ensure that among them are not infiltrated -- people who were, you know, part of a terrorist organization that are using this crisis."

The GOP candidate acknowledged that the "vast and overwhelming majority" of refugees are not terrorists, "but you are always concerned about that," he said.

Rand Paul: "There are limits"

Asked about the refugee crisis on CNN last week, Kentucky Sen. Rand Paul said, "We are a welcoming nation, and we have accepted a lot of refugees, and I think we will continue to do so. But we also can't accept the whole world, so there are some limits."

Paul argued that past efforts to take in refugees have backfired.

"We've also run into some problems with accepting so many refugees that we take some of the people who could help rebuild the country," he said. "We did this with Iraq, where we won the war, but then we accepted 60,000 Iraqi refugees into our country, some of which wish us harm and tried to attack us. Same way with Somalia. We've received so many immigrants and refugees from Somalia, that many of them are from the faction going back to Syria to fight against us."

Consequently, he said the U.S. has to be "selective and careful" about who it takes in.

Sen. Ted Cruz, R-Texas, on Tuesday released a statement declaring, "The United States has a long history of response to humanitarian disasters and this should be no exception."

"Our immediate role should be to support our regional allies who are on the front lines through public and private assistance to the international organizations who are best poised to administer aid," he said. "In terms of settling the migrants, if the ultimate goal is to return them to their homes, which I believe it should be, it doesn't make sense from a logistical or a security standpoint to move large numbers of them to far-off countries like the United States. Ultimately, we need to address the cause of this crisis or we will just have more and more migrants displaced."