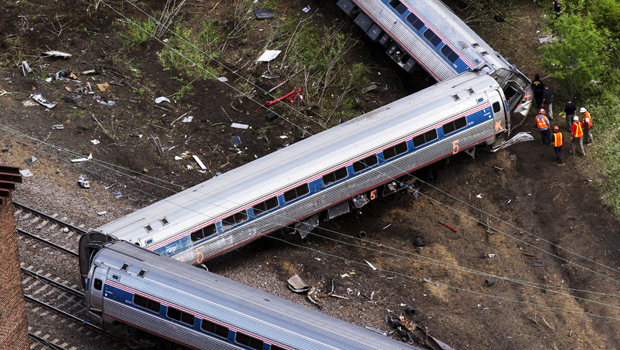 Yesterday's deadly Amtrak derailment in Philadelphia, which killed at least seven people and injured more than 200 others, may have people wondering, where is the safest place to sit on a train?

Conventional wisdom holds that the front car of a train is the most dangerous place in the event of a head-on collision, while the last car is less safe if the train is rear-ended. But, in fact, trains are nine times more likely to derail than to hit another train or car head-on or to get hit from behind, according to the Federal Railroad Administration (FRA). The administration found that there were about 13,200 derailments from 2005 to 2014, compared with about 1,450 collisions.

Investigators are working to determine what caused the derailment of Amtrak's Northeast Regional Train 188, which was carrying 238 passengers and five crew members en route from Washington, D.C., to New York Tuesday night (May 12). The train had seven cars, including the engine car, which separated from the others in the accident. Six of the cars overturned, and some were so mangled that firefighters had to use hydraulic tools to get people out, The New York Times reported. [How Safe Is Train Travel?]

Studies suggest that broken rails or welds are the leading cause of derailment on main tracks, and these problems more often cause derailments near the front of the train. Overall, choosing a car located one or two back from the middle of the train may be the safest bet, Ross Capon, president of the National Association of Railroad Passengers, told CBS New York in 2013.

Head-on collisions do occur, however. In February, a Metro-North commuter train in Valhalla, New York, collided with an S.U.V. on the tracks, killing six people, including the car's driver, and injuring 15 others. That crash was so deadly, in part, because long sections of the electrified third rail pierced the front and second cars, the Times reported.

In general, aisle seats are safer than window seats, where a passenger is more likely to come in contact with broken glass or be thrown from the train, Capon told CBS New York.

Safety experts also recommend choosing a rear-facing seat, because a person sitting there is less likely to be thrown forward during a collision. Trains are more likely to hit something side-on than head-on or from behind, according to the FRA.

If the train has a café car, it's a good idea to avoid spending too much time there, because the rigid tables can become dangerous if the train suddenly breaks or hits something, Vocativ.com reported.

Trains are still one of the safest modes of transport; in 2013, 891 U.S. fatalities were linked to rail travel, compared with more than 32,700 deaths from highway accidents, according to the National Transportation Safety Board. And the vast majority of railroad deaths are trespassers struck by trains.