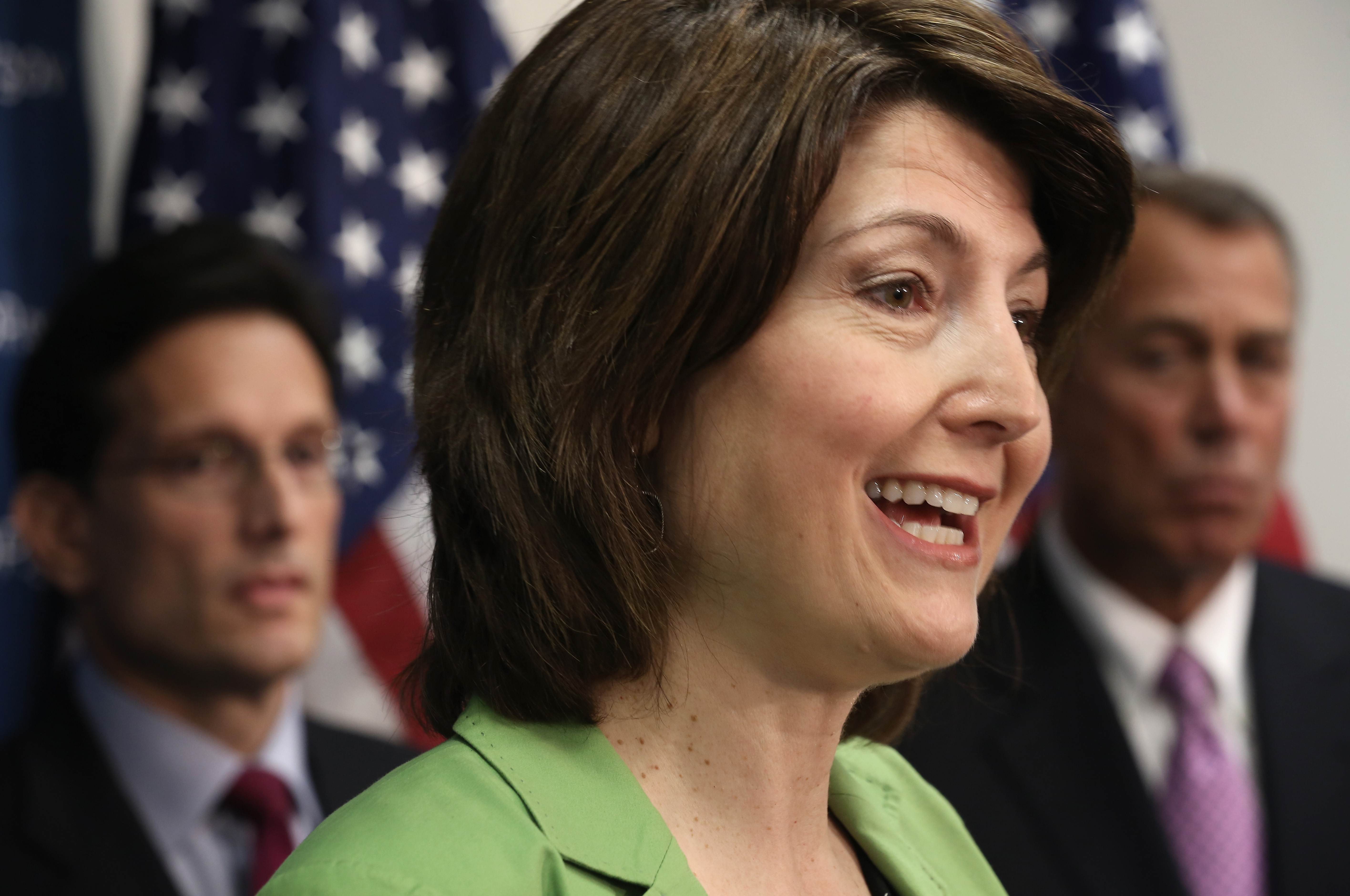 Since the video of Donald Trump’s lewd comments from 2005 surfaced Friday evening, a number of Republican members of Congress have lashed out at the GOP presidential nominee, with some even calling for him to drop out of the presidential race.

CBS News is compiling a list of where all 28 GOP women in Congress stand on Trump since the news spread. Many have condemned him without rescinding their endorsements while others have called on him to step aside. Some haven’t weighed in yet.

Susan Collins (R-Maine): In August, Collins announced she would not vote for Trump and condemned Trump’s comments Saturday in an interview with the Portland Press Herald:“Donald Trump’s lewd comments are the latest in a series of remarks he has made ranging from inappropriate to reprehensible that demonstrate why he is unsuitable for the presidency.”

Lisa Murkowski (R-Alaska): Murkowski says she can’t support Trump. In a tweet, she said “I cannot and will not support Donald Trump for president. He has forfeited the right to be our party’s nominee.” In a longer statement on her website, Murkowski added, “He must step aside.”

Kelly Ayotte, (R-New Hampshire): Ayotte, a vulnerable Republican up for reelection, condemned Trump’s comments and said she plans to write in Mike Pence when she casts her vote in the election: “I wanted to be able to support my party’s nominee, chosen by the people, because I feel strongly that we need a change in direction for our country. However, I’m a mom and an American first, and I cannot and will not support a candidate for president who brags about degrading and assaulting women. I will not be voting for Donald Trump or Hillary Clinton and instead will be writing in Governor Pence for president on election day.”

Shelly Moore Capito (R-West Virginia): Moore Capito condemned Trump’s comments and said Trump should consider dropping out of the race: “As a woman, a mother, and a grandmother to three young girls, I am deeply offended by Mr. Trump’s remarks, and there is no excuse for the disgusting and demeaning language,” Capito said in a statement Saturday morning. “Women have worked hard to gain the dignity and respect we deserve. The appropriate next step may be for him to reexamine his candidacy.”

Joni Ernst (R-Iowa): Ernst condemned Trump’s comments, but has not withdrawn her support for him. She tweeted: “The comments DJT made are lewd & insulting. There is no excuse, and no room for such reprehensible and objectifying talk about anyone, ever.”

Cathy McMorris Rodgers, House GOP Conference Chair (R-Washington): McMorris Rodgers condemned Trump’s comments, but has not withdrawn her support: “It is never appropriate to condone unwanted sexual advances or violence against women…Mr. Trump must realize that it has no place in public or private conversations.”

Susan Brooks (R-Indiana): Brooks condemned Trump’s comments and while she has been critical of Trump previously, she has not officially withdrawn her support. STATEMENT: “Donald Trump’s words and the actions he described are reprehensible and disrespectful, and I am personally disgusted by this behavior…This is nowhere near the conduct Americans should expect from someone seeking the office of President.”

Barbara Comstock (R-Virginia): Comstock condemned Trump’s comments and said Trump should step aside. She has not weighed in publicly on his candidacy before. STATEMENT: “This is disgusting, vile, and disqualifying. No woman should ever be subjected to this type of obscene behavior and it is unbecoming of anybody seeking high office. In light of these comments, Donald Trump should step aside and allow our party to replace him with Mike Pence or another appropriate nominee from the Republican Party. I cannot in good conscience vote for Donald Trump and I would never vote for Hillary Clinton.”

Mia Love (R-Utah): Love had not previously endorsed Trump and said she cannot vote for him now. STATEMENT: “For the past several months I have been one of the few who refused to endorse Donald Trump. I have said all along that I was still waiting for Mr. Trump to demonstrate his commitment to the kinds of principles and policies the people in Utah’s 4th Congressional District want in their elected leaders. Mr. Trump has yet to clear that bar and his behavior and bravado have reached a new low. I cannot vote for him. For the good of the party, and the country, he should step aside. I will not vote for Hillary Clinton who has her own trouble with the truth, has a major integrity deficit and seems to hold a disdain for hard-working Americans. With such uncertainty the role of Congress as a check and balance to the executive branch is more important than ever. It is vital for Republicans to maintain leadership of the House and for me to continue to represent and raise Utah’s voice in Washington.”

Ann Wagner (R-Missouri): Wagner condemned Trump and announced that she withdraws her endorsement of Trump. “I have committed my short time in Congress to fighting for the most vulnerable in society. As a strong and vocal advocate for victims of sex trafficking and assault, I must be true to those survivors and myself and condemn the predatory and reprehensible comments of Donald Trump. I withdraw my endorsement and call for Governor Pence to take the lead so we can defeat Hillary Clinton.”

Jackie Walorski (R-Indiana): Walorski condemned Trump’s comments but didn’t withdraw support for Trump.  “These vile comments are demeaning and indefensible. It is never appropriate to use such offensive language toward women, anywhere or anytime.”

Elise Stefanik (R-New York): Stefanik condemned Trump’s comments but has not withdrawn her support for Trump. “Donald Trump’s inappropriate, offensive comments are just wrong - No matter when he said them or whatever the context. I hope his apology is sincere.”

Martha McSally (R-Arizona): McSally condemned Trump’s comments, but hasn’t called for him to step aside. She previously declined to endorse Trump, but said she might vote for him. “Trump’s comments are disgusting. Joking about sexual assault is unacceptable. I’m appalled.”

Vicki Hartzler (R-Missouri): Hartzler condemned Trump’s comments, but said she’ll continue to support him. Tweet: “What Donald Trump said was disgusting and repulsive just like Bill Clinton’s behavior was while President. It is ironic that Secretary Clinton says such words cause someone to not be fit for president yet she believes her husband’s actions were tolerable. While I do not agree or condone Donald Trump’s words, I believe his policies are better suited to get America working again.”

Kristi Noem (R-South Dakota): Noem condemned Trump’s comments, but didn’t withdraw support. Tweet: “No one should ever talk about a woman - another person for that matter - in the repulsive way that Donald Trump did. Period.”

Lynn Jenkins (R-Kansas): Jenkins is not pulling her support for Trump. “Donald Trump’s comments are disgusting, outrageous and wrong on so many levels. There is no place for anyone, anywhere to condone assault or promote undesired sexual advances. It doesn’t matter the place, it doesn’t matter the time - his words were offensive and backwards.”

Cynthia Lummis (R-Wyoming): Lummis is not pulling her support for Trump. “Mr. Trump has rightly apologized for his disgusting, decade-old comment about women. Because he had the good sense to choose Mike Pence as his running mate I still intend to vote for him, but I will be holding my nose and repeating to myself, “Supreme Court, Supreme Court, Supreme Court” as I vote. I fear for my freedom and our Nation’s future if Hillary Clinton is appointing Supreme Court Justices and running the federal government.”

House members who haven’t weighed in: