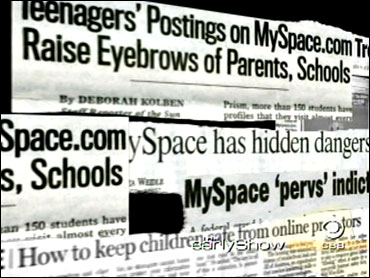 Do you have any idea what your kids are doing on their computer? Chances are they have a profile on a social networking site such as myspace.com, which has become popular among teens.

As part of a three-part series titled "Too Much Information," The Early Show national correspondent Tracy Smith takes a fascinating look inside the teenage digital world.

Since Smith started working on this series a few months ago, myspace.com has more than doubled its membership. The site has also made lots of headlines, as a tool for both law enforcement and, unfortunately, online predators, to get an inside look into the world and the minds of teenagers.

Social networking communities such as myspace.com are the fastest growing teenage phenomenon ever. Myspace.com alone has more than 75 million users and kids are signing up in droves.

"Because it is a place where they all go and find each other, you'd have a hard time finding a teen who doesn't have a profile on MySpace," says Laura Groppe from the Girls Intelligence Agency.

Kids customize their profiles, a sort of encyclopedia of personal information including screen name, town, school, lots of thoughts and feelings, and pictures.

The allure? "They want to be there, they want to talk, they wanna find out what's happening," explains high school student Danielle Swain.

"You're away from your parents and you're in control of your own thing," adds student Vivian Robbins.

Kids post comments about each other's pictures, and jump from one profile to another through networks of friends.

"Myspace is just a way for kids to start bragging about, 'I get so drunk on the weekend,' and it's more interesting to say that than say, 'I make cookies with my grandma,' " says student Mary Ellen Handy.

"It shows you have friends. Like, if you don't get comments, no one likes you," says high school student Malory McDonald.

And that's where the problems start. While MySpace feels like a private club to kids, it's a public place with breakable rules and limited enforcement that anyone with Internet access can see.

"There's lots of sexual predators who are using these sites like catalogues to find children," warns Aftab.

Kids who believe they're safe by hiding their identity can still give themselves away.

Myspace.com user Jaclyn, 15, never gave her real name and lied about where she lived. But someone out there saw a picture on her profile with a basketball camp T-shirt and made contact.

"He was like, 'Hey my name is David and I went to basketball camp, too.' So I was like, oh, I was responding like a friend who I saw there," she explains.

Jaclyn communicated with David on and off for a few months. Then one day, "This really creepy, like, fat old guy just goes walking by and we all look at each other like, 'Who's that?' Like, we'd never seen him before," she recalls.

The man showed up at a skating rink, looking for Jaclyn and ran into her mother.

Jaclyn says David also knew her friends' names, too, which she says was pretty "weird."

"I thought 'Oh, my goodness. He's stalking my daughter,' " Terry says. "I was scared and angry. I wanted him gone immediately."

Myspace.com has been cited in story after story of teen-related crises and law enforcement across the country is trying to cope.

In sleepy off-season Cape Cod, a usually quiet precinct, cops' suspicions were roused when photos were posted online of kids doing drugs and kids holding weapons in their hands.

Sgt. Warren Tobias of the Provincetown Police Department says thoughts of the Columbine shooting went through his mind when he saw the photo of the armed teen.

Officers now comb through MySpace on a daily basis, alerting parents if they see trouble.

"We're actually eavesdropping on their private conversations is what we're doing," Sgt. Tobias says. And he admits they sometimes feel they're in a place they shouldn't be. "It's a very odd feeling."

But the question is: how do you keep over 75 million people safe in a virtual world?

"After the whole thing happened with the police and stuff, he still tried to talk to me," Jaclyn says of David. She says she simply tried to ignore him.

David was taken into custody but let go because there was nothing to charge him with. Jaclyn, meanwhile, is doing fine and is back on MySpace.

"A lot of kids know there are creeps out there but they tend to make it, 'I'm too smart for that,' " warns Aftab. "A lot of kids think they can tell the difference between a kid and a predator online. They can't. I can't. The FBI can't. None of us can."

Myspace.com declined The Early Show's many requests for an interview but say they are taking every precaution to keep kids safe, including hiring a new online safety chief.