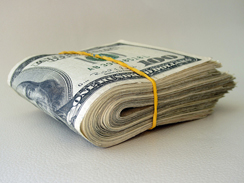 There are many academic papers that provide simple and logical risk explanations for the value premium. For example, value companies typically:

For these reasons, they tend to do worse in bad times. Assets that tend to perform poorly in bad times (when labor capital experiences increased risk) should command a large risk premium.

If we look at the returns for periods of deflation (186 months), we find that the value premium turns negative, producing a monthly premium of -0.20 percent. This shouldn't be an unexpected outcome, as deflation increases the real cost of debt and value companies tend to be highly leveraged.

And if we look at periods when we have both deflation and recession (the riskiest of times), we find that for the 68 months the monthly value premium is a -0.63 percent. During these months, the monthly stock risk premium was -1.95 percent.

The bottom line is that the risks of value stocks shows up in the riskiest of times -- during financial crises that strain the banking system -- providing a logical explanation for the value premium. Consider the following:

The first period was the beginning of the Great Depression. The GDP fell sharply, and we experienced a severe deflation. The economy began a strong recovery in 1933, which lasted through 1936. In 1937, bad fiscal and policy decisions pushed us back into another depression, and we once again experienced deflation.

1979-81 was the period of the Great Inflation, when the Federal Reserve drove the federal funds rate to almost 20 percent in an effort to dampen inflation. That drove the economy into a recession, and unemployment eventually exceeded 10 percent. 1989-91 was the height of the S&L crisis. And the financial crisis that began with the fall of Lehman Brothers has produced a similar outcome.

The value premium has been negative for four of the five years since the financial crisis began in late 2007. The annual average premium was -4.1 percent. And it has continued to be negative in 2012. Is it a coincidence, or is it simply the risk showing up just as the academic literature suggests it should?