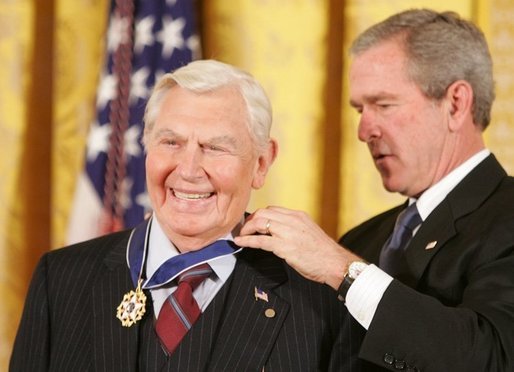 (CBS News) Actor Andy Griffith, who died on Tuesday, spent most of his time onscreen in fictional Mayberry, North Carolina. In real life, Griffith managed to make it up to Washington DC at least once, to be awarded the highest honor a civilian can receive.

Griffith, who played Sheriff Andy Taylor on "The Andy Griffith Show," was one of 14 recipients awarded the Medal of Freedom in 2005. President George W. Bush clasped the medal around the actor's neck and credited Griffith with the "gift of storytelling," adding that "his own life is a might fine story by itself."

Griffith was a high school teacher before becoming an actor who went on to receive a Grammy.

"TV shows come and go, but there's only one Andy Griffith. And we thank him for being such a friendly and beloved presence in our American life," the then-president said at the time.

President Bush restated one of Griffith's descriptions about the show: "It was about love. Barney would set himself up for a fall, and Andy would be there to catch him."