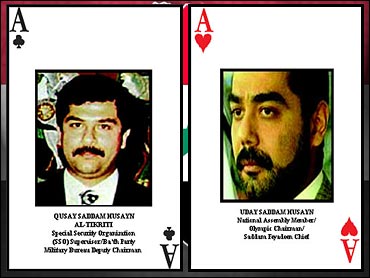 
As soon as senior U.S. officials in Washington started to say it's "very likely" that Saddam Hussein's sons, Odai and Qusai, were dead, Iraqi experts in Washington began making assessments on the potential meaning of such news.

"No doubt, it's good," said Georgetown University professor Mamoun Fandy. "It sends a strong signal that the U.S. is serious, no matter the cost in hunting them down, so it's a strong signal to the resistance."

American troops are not immune from the political pressure to kill or capture Saddam and his sons which flows from Washington. Since the first night of the bombing campaign the U. S. military has tried a number of times to act on various pieces of intelligence to take care of the three most wanted men in Iraq.

Now, it appears, numbers two and three have been taken care of. As the military performs DNA testing on the remains of bodies pulled from a house in Mosul, America's top general in Iraq, Lt. Gen. Ricardo Sanchez, said "we have since learned Odai and Qusai were among the dead."

For Amatzia Baram, an Israeli expert on Iraq now at the U.S. Institute of Peace in Washington, the meaning of today's action will not be hard to read: "the Iraqi people will understand the U.S. is close to Saddam Hussein and, in any case, the regime won't continue."

Qusai Hussein, Saddam's younger son, was believed to be his heir apparent. With Qusai dead, and with Saddam's closest bodyguard and adviser, Abd al-Hamid Mahmoud, already in U.S. custody, even die-hard Baath party loyalists will realize the regime cannot continue.

Baram notes, however, there may be some cause for added concern for American soldiers in the short run. "The next two weeks will be the most difficult because people will be looking for revenge, but in three to four weeks, you'll see a decline." The raid in Mosul will "discourage many people from taking risks," Baram says, "although it won't put an end to it (acting against American targets)."

Prof. Fandy says part of what happens next depends on what American officials do. It seems the house in Mosul where Saddam's sons were killed belonged to an influential leader of the Shamar tribe and, it so happens, another leader of the same tribe is a member of the recently appointed governing council. Fandy says it's important how the Americans deal with the two tribal leaders, especially the one who was harboring Odai and Qusai, because of the message it will send to other tribal leaders in Iraq. It's not yet known whether there was any connection between the two Shamar tribal leaders and any information leading to the raid in Mosul.

The bottom line according to Mamoun Fandy: the family of Saddam Hussein is not coming back. "As for the two sons," Fandy says, "both were ruthless sons of bitches and ordinary Iraqis would like to see them gone."

With the sons gone, the good news for American forces is they can concentrate their efforts, now more than ever, on the head of the family.